We have all been there. We have just finished reading about a fight being booked, and we immediately sit back and consider the possibilities of the contest. We contemplate which of the fighters is competing the best recently? Who has obvious advantages – and where? Are they equal in any of the many facets of MMA?

These are just a few questions that any fight fan (compelled with intrigue) might consider whilst imagining the potential of a bout between two highly skilled opponents.

So, as you can imagine, when I read that Patrick ‘The Predator’ Cote and Ben ‘Killa B’ Saunders had been booked - I was jubilant to say the least. The contest is a fascinating match-up between two of the divisions most experienced competitors.

Anyway, time to look at the numbers…

We can see that Saunders is taller than Cote by four inches. He also possesses a two inch reach advantage over Cote.

The striking statistics of the two athletes are interesting too. I looked at the numbers in four key areas: strikes landed per minute; strike accuracy; strikes absorbed per minute; and strikes avoided (defended).

In all four areas Ben Saunders’ statistics are superior. Ben lands more strikes per minute, and is more accurate. Moreover, he absorbs less strikes per minute, and also performs slightly better defensively: Ben has avoided/defended 50% of significant strikes; whereas Cote has defended against 49.22%. However, it should be noted that Ben was knocked out by Lima in 2013, and he has not faced the same level of competition as Cote. Ben has had 27 fights, and 10 of those were with the UFC; whereas Patrick has had 18 of his 31 fights with the UFC.

The grappling statistics between the two men are equally interesting. Again, I looked at four key areas: takedown average; takedown accuracy; takedowns defended; and submission average; ‘Killa B’ again comes out on top in all areas except takedown accuracy. In fact, Cote hasn’t had a submission win since 2006; moreover, he was submitted by Alan Belcher in 2010. Saunders, in contrast, has never been submitted. 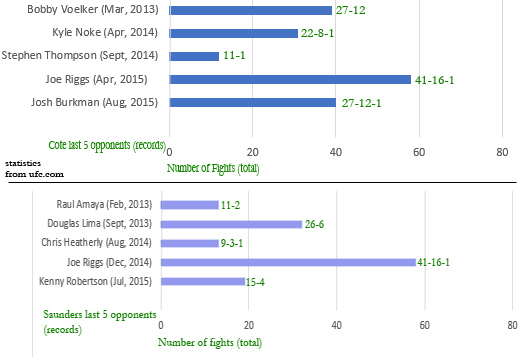 Cote also has excellent victories in the cage against Ricardo Almeida and Kendall Grove; however, he fell short in contests against Anderson Silva, Chris Leben, and Cung Le. Cote even fought Tito Ortiz to a decision at UFC 50 in 2004. Since his 2010 loss to Tom Lawlor, Cote has attained a very respectable 9-2 record.

Ben hit a patch in 2009 and 2010 where - although he picked up a decent victory against Marcus Davis - he lost three of four fights. His losses during this period were against Jon Fitch, Mike Swick, and Dennis Hallman. Since his 2010 loss to Hallman (and his subsequent release from the UFC), Ben has acquired a record of 11-3. 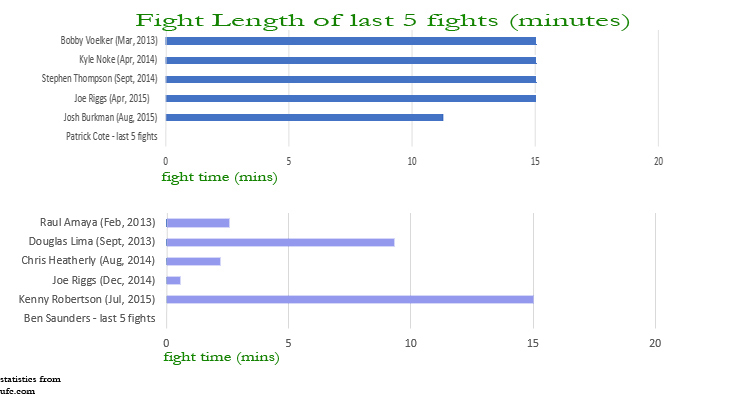 The numbers do indeed appear to paint a picture in which Ben Saunders has a slight edge in this fight. Ben is taller, longer, more active, and slightly more diverse. What is more, his constantly evolving submission game could potentially turn the Predator into the prey.

One would, however, be an absolute fool to ignore the fact that Cote has fought the elite of Mixed Martial Arts. And during that time, he has repeatedly demonstrated that he possesses the tenacity, the experience - and the skill required - to enable him to grind out a win when he needs one.

Unquestionably, this is a tough fight for both men. There is no clear favourite.

So who will 'turn up' on the night?

I would love to hear your thoughts.