Pat and Bang: A father seeks to avenge his son’s loss

In the original Red Dawn, a John Milius film about a hostile Russian takeover of American soil that came out in 1984, the father figure, played by Harry Dean Stanton, makes a plea to his sons (and his son’s friend) while held in Soviet captivity.

"Boys!," he yells from the inside of a commandeered drive-in movie theater-turned-concentration camp. "Avenge me! Avenge me!" He is then escorted back to whatever untold torture awaits him, while the boys arm themselves and form the "Wolverines," a guerilla collective that goes about foiling the Soviet interlopers via real-time war instincts and teenage cunning. Against what might be considered insurmountable odds, they avenge the old man.

At the time it was all very believable. The father-son bond, the story told us, was stronger than the reddest army.

What’s happening at the Androscoggin Bank Colisée at "NEF XVIII: Made in America" this weekend in Maine is interconnected, although in a roundabout way. Only, this time it’s non-fiction and slightly less dramatic -- instead of the boys avenging the father, it’s the other way around. It’s the father who is avenging his son. Forget about the coincidental fact that it was Milius who invented the original Octagon in the early-1990s, Steve Bang Sr. watched his 22-year-old son Steve Bang Jr. lose to a 50-year old man named Pat Kelly via TKO in just such a cage last November at New England Fights XV.

That sort of thing stings. It stung Bang Sr. into action.

On Saturday, Bang Sr., 45, will try to set things right against Kelly in Lewiston, Maine -- at the same venue that Muhammad Ali beat Sonny Liston via the "Phantom Punch" in 1965 when Kelly was in his first year of life. It will go down as an amateur mixed martial arts fight, which in essence stands for "an exhibition." But they will throw real punches, with real intent, at ages that defy common sense. They will meet at an agreed upon weight of 160 pounds. Bang Sr. is doing what he has to do for Bang Jr. 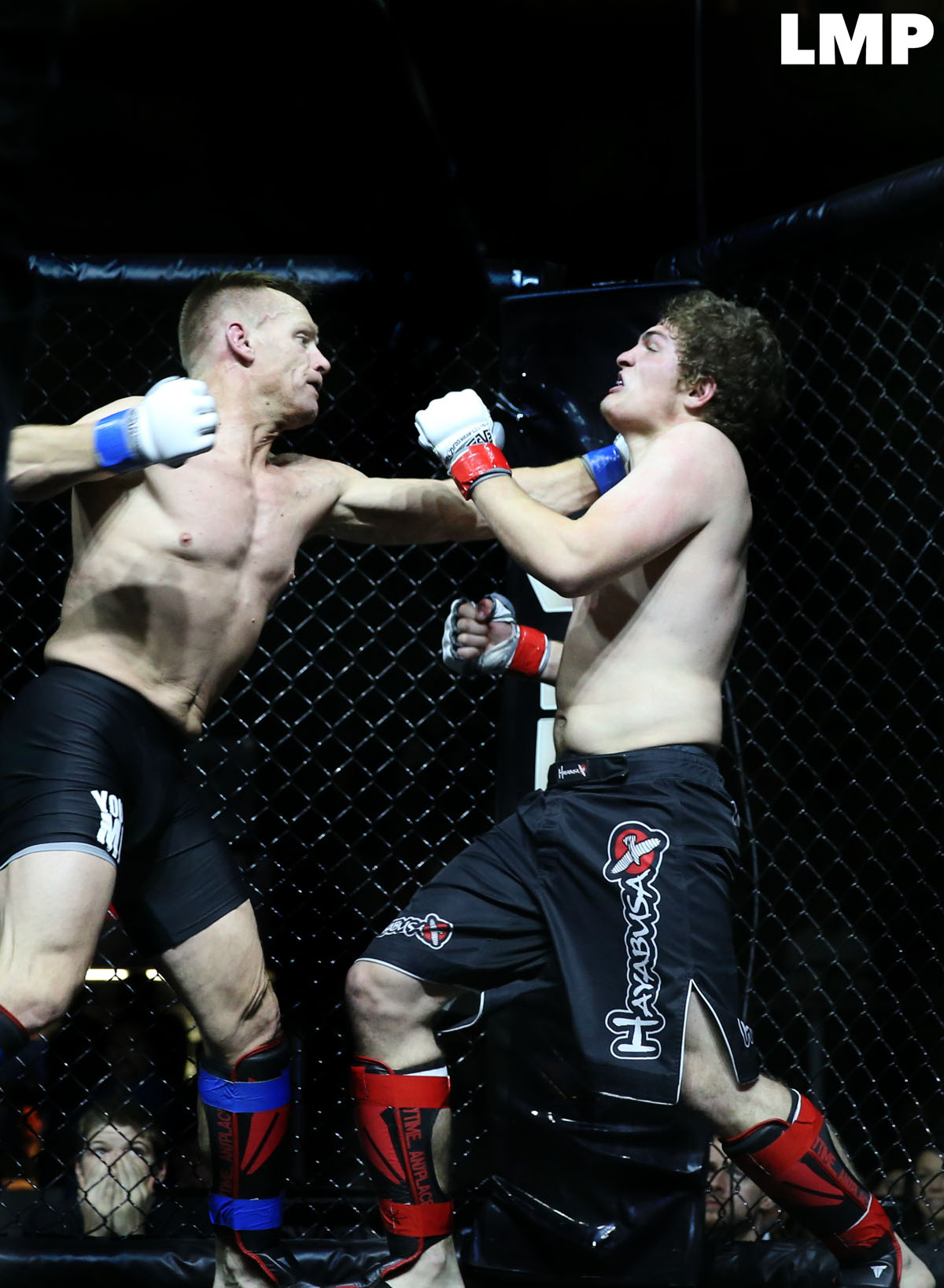 As a proactive father, he is avenging his son’s loss.

"I had been chomping at the bit, waiting for the right time for everything to line up," says Dr. Bang, who in his daytime gig works as a bariatric surgeon. "All of a sudden I was watching that fight and I realized that right now is the right time, there won’t be any better time than now. I thought, what better than to enter the ring against the man who just beat my son? So as I was watching that fight I was thinking that. A couple of days later I contacted the promoter, Matt Peterson, and I said how about this -- father seeks to avenge son’s loss in the ring?"

And so here we are, with a fun little narrative about a father, a son and a man traipsing through their generational gap.

Dr. Bang, who turns 46 the Monday after his fight, has one amateur bout to his name. He won it, and it gave him a taste for more. He has four sons in various stages of their own MMA careers -- Steven Bang Jr. (whom he is avenging), Sheldon Bang (2-2), Shawn Bang (1-1), and Skylar Bang (the baby Bang who is about to get started). He is an endurance athlete on the side, who competes in the Ironman triathlon.

He’s not so much a middle-aged adventure seeker as he is a guy who is going back to his roots. Dr. Bang wrestled at Palm Springs High School back in the 1980s. He then walked on with the Brigham Young University wrestling team and enjoyed a fine run on the mats under the direction of Mark Schultz, who was an assistant coach at the time. After suffering a broken ankle, he left on a two-year mission.

Back in those days, wrestling was a dead-end sport. So he gave over to his studies, and ended up a respected surgeon in Lewiston, where every year at Christmas he turns his house into a psychedelic winter wonderland that draws thousands of spectators (and the ire of his neighbors).

"I often say on the night of the fight I put my Hippocratic Oath away," he says. "I just kind of file it away. Can’t have an oath to do no harm -- on fight night I’m looking to do some harm. At the same time, I don’t find it too much of a contrast. It’s all part of life, and it’s how I view life in general. And even getting into the ring and putting myself out there with the background I have and the education that I have and what I do for a living, it’s high risk. I don’t take that lightly. I am acutely aware of the stakes getting into the cage. I well past my years of perceived invincibility that usually accompanies youth."

What Dr. Bang will encounter on Saturday night is another former collegiate wrestler in Pat Kelly, a spry quinquagenarian whom Dr. Bang refers to as a "Goliath." Kelly wrestled at the University of Maine at Orono back when it had a Division 1 program. He’s a biology teacher these days at Camden Hills Regional High School in Rockport, Maine, where he’s also acted as the wrestling coach for the last two decades. It was Kelly who coached UFC veteran Tim Boetsch to four state championships at the school when it was known as Camden Rockport High School.

You wouldn’t know that Kelly was responsible for so much cauliflower ear to hear him talk, especially when he gets to remembering how asinine it actually is to fight in a locked cage at any age, much less the one attached to him.

"Sometimes I go, geez, I was locked in a cage with a guy who wanted to kick the crap out of me and it didn’t happen," Kelly says. "At my age I’m not worried about anybody. I’m just an amateur. It didn’t matter if it was against Dr. Bang or otherwise. I’m not one of the younger guys who wants to build an ammy record and then go pro. I just want to be an advocate for this sport and for the lifestyle behind it, and the focus within it, and the outcome of it. That’s my message. You can start wherever you’re at and start getting in shape." 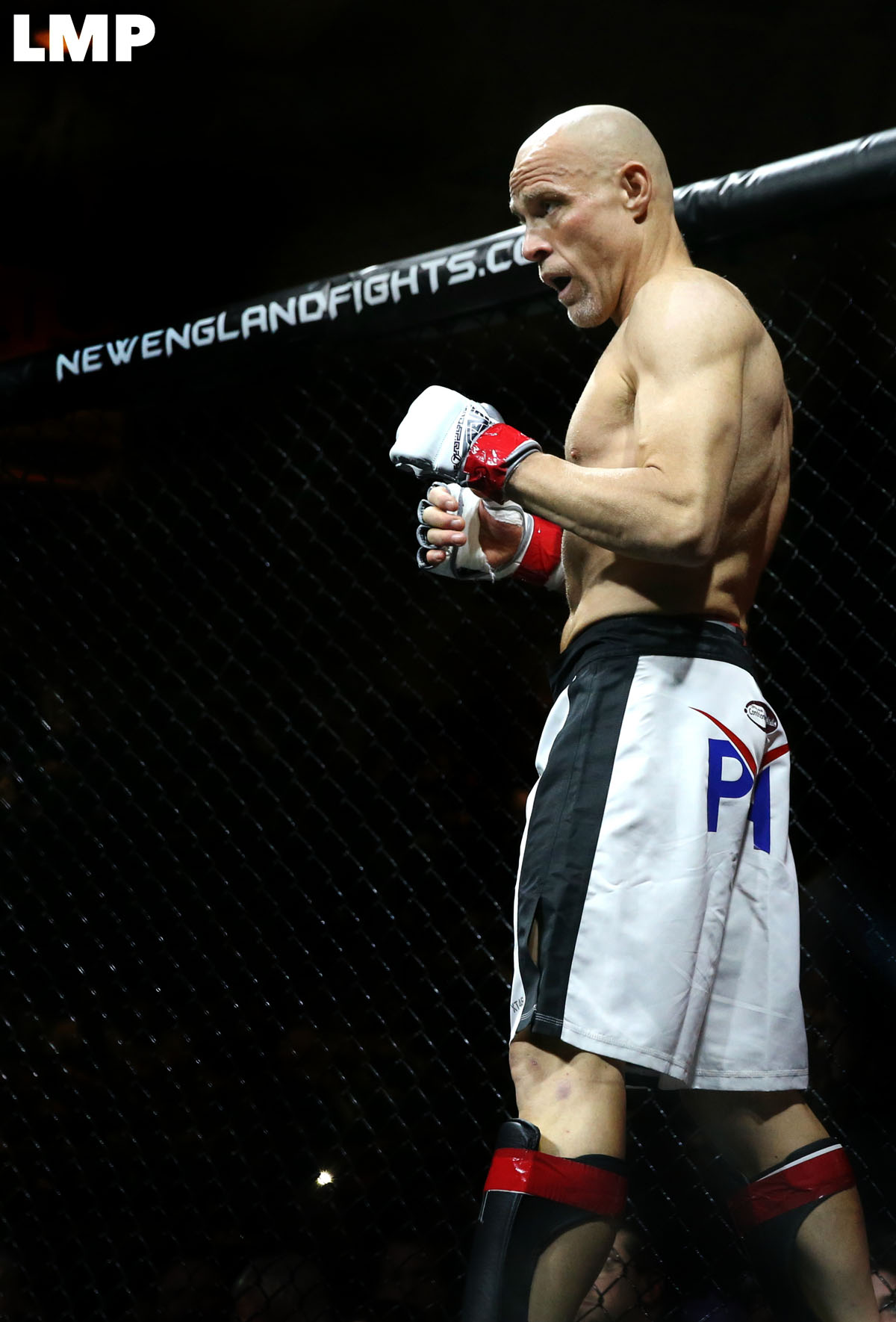 Both Dr. Bang and Kelly are in fantastic shape. Both are smart, well-respected men in their chosen fields. Yet for whatever reason the call of the cage became too strong for them to ignore. When most people feel like reclining into life’s soft middle, they felt like slugging it out in front of a paying audience.

"The way I look at it is…we’re two older guys trying to hang on with one hand, and let go with the other," Kelly says. "We can’t quite let go, we can’t quite hang on as far as the competitive aspect."

Kelly trains at Young’s MMA, which is an hour-and-a-half commute each way for him in Bangor. Dr. Bang trains at Central Maine Brazilian Jiu-Jitsu (CMBJJ). Kelly says MMA drives him "to the edge of his personality." Dr. Bang says fighting represents "the pinnacle of putting yourself out there." Kelly imparts wisdom ("Train smarter not harder at 51"), while Dr. Bang throws out parables ("The idea is to push the pace and wear him down; fatigue makes cowards of all men").

The trash talk between the two waffles between indifference and outright veneration.

The odd man out in the scenario is Bang Jr., who -- on the surface, anyway -- has the dubious distinction of having to have his father come in and settle a score for him. A loss to 50-year-old man is one hell of a thing to build hype around. But Dr. Bang raised his kids to be humble competitors. Bang Jr. doesn’t mind the set-up.

"I’m definitely down for it," says the junior Bang. "Obviously the ‘avenge my loss’ thing publicizes the loss. But I have a level head, and I know people embellish a bit. I know what happened in that fight, and I did lose. I don’t take it personally, and I think it’s awesome that dad wanted to step in with a guy with a similar background as him, and an older guy. I think it’s a perfect fight for him."

Kelly, who is anything but braggadocio, says he thinks Bang Jr. might have taken too much for granted heading into their big showcase fight in November, and that he doesn’t mind facing back-to-back Bangs.

"I love it," he says. "Why wouldn’t he want to avenge his son’s loss? I’m a father of four, I can imagine sitting ringside and being a dad and watching my little boy wrestle and lose. You’ve got to find a motivation…if I didn’t beat his son, I’m just another old guy. To be honest, his son probably came in a little underestimating me, a little soft. I don’t look at this as if I win I’m better. I look at this is, thank you for the opportunity."

There’s a lot of mutual respect heading into "NEF XVIII: Made in America" by the principals in play. Ninety-seven years of back-story go into a fight that won’t count on anybody’s record. It’s a family thing. It’s a pride thing. It’s an act of defiance by two guys who still have something in them to prove.

"It wasn’t like, ‘that guy’s beating my son, I’m going to kill him!’" Dr. Bang insists. "It wasn’t that by any means. More so it was I could see what Steven needed to do to beat him and I think that he should have.