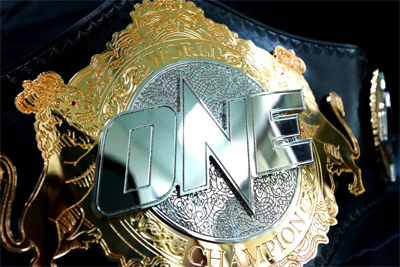 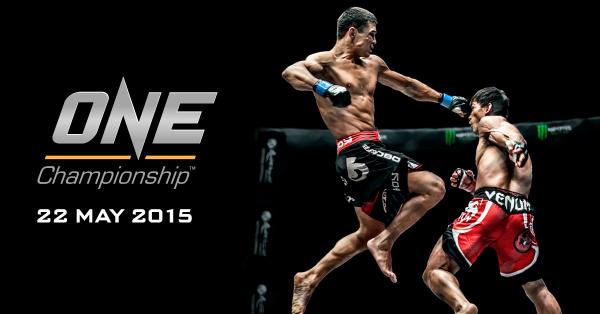 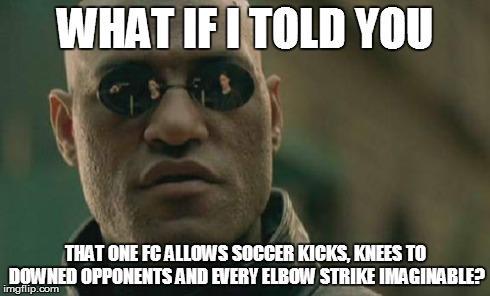 Man am I excited to tell you about this ONE Championship: Warrior's Quest matchup! It has one of my personal favorite prospects in the entire world on it! Featured on a card absolutely chalked full of elite up & coming talent! SO PUMPED for this Card of the Year Candidate!

Timofey Nastyukhin (8-1 MMA, 1-0 ONE) is a sensational 25 year old Russian MMA prospect on an 8 Fight FIRST Round Finishing STREAK culminating in 2014's KTFO of the Year!

^ was that AWESOME or what!

*NOTE: The fighter who got KTFO'd there was ok. After he woke up he was fine & walking around minutes later believe it or not. It's WAY less damage than Hunt/Miocic, Cain/JDS, Munoz/Weidman, etc.

Check out this awesome ONE Championship produced highlight vid that has some of the commentary from Steve Dawson & UFC Top10 Josh Thomson included in it! You can tell Josh sure did enjoy it!

"I just entered the cage and followed my gameplan. I did not plan this knee, but I noticed some defensive movements of my opponent and try to catch him with knee. As you see it was a good action."

Nastyukhin scored that 2014 KO of the Year over Wushu Gold Medalist striker & fan favorite Eduard Folayang (14-5 MMA), a tough & respected Team Lakay veteran. It was a bigtime upset victory because Folayang had just defeated the former ONE champ & many alluded to Folayang being given the next ONE Title shot had he won. 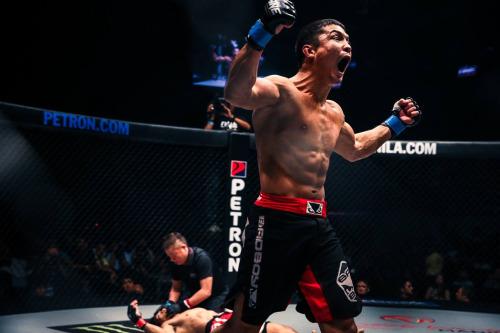 "I am happy that my fight was highly regarded by the MMA world and I will continue to delight my fans with spectacular fights because I love the ONE FC rule set."

Will he continue his impressive 1st Round Finishing streak at ONE: Warrior's Quest?

Achieving a winning streak of finishes is impressive in & of itself, but to have a 1st Round Finishing Streak (including 4 being under a minute!) is just BEYOND impressive! It's why I'm so hyped about this fighter. ONE FC could have a potential STAR on their hands here. I remember another Russian fighter who had a penchant for 1st Round finishes: Fedor Emelianenko. Could we be witnessing a mini-Fedor budding right before our eyes? 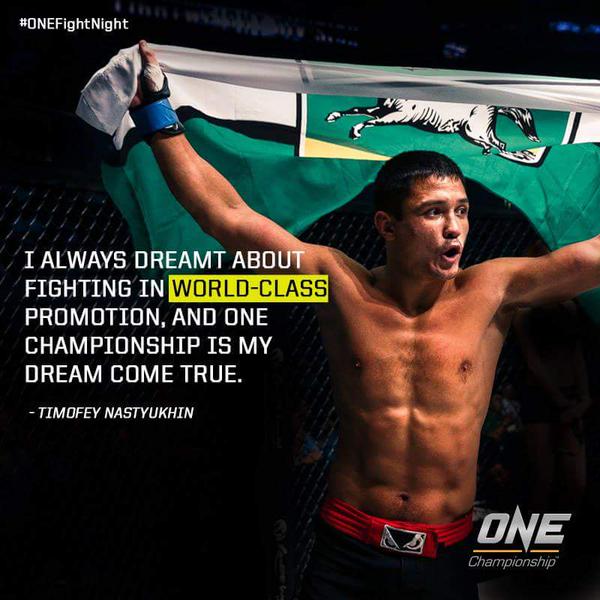 Timofey Nastyukhin is quite simply one of the most exciting MMA prospects in the entire world. He is one of the fighters I wanted on the Askren/Santos card so USA fans & media would get to see him perform; and if he performs well at Warrior's Quest on Friday I'm going to pretty much beg for him to be on the upcoming Askren/Santos Rematch card because this kid deserves some attention & recognition!

Nastyukhin is a Russian Top Team fighter from Novokuznetsk, Russia, and was a Pankration Champion that had already competed numerous times under the amateur style ruleset before going pro in MMA full time.

"I had been training Pankration for eight years with my coach Ivan Ryabtsev, this is the same sport with MMA."

Tim's MMA career got off to a rocky start when he lost his pro debut in 2010. He then decided to take 3 years off to sharpen his MMA skills before returning to the cage in 2013 to start the sensational run he's currently on!

"This break was important for me to change my training and way of fight for professional MMA. We changed a lot and I came back stronger and after that did not lose any fight."

ONE Championship is matching Tim up with an Aussie slugger that will possibly look to strike with him! So we could be in for some real fireworks here folks! 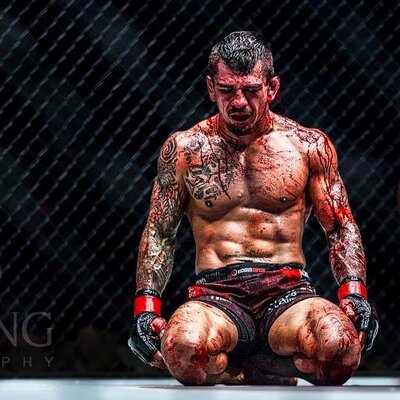 "Ruthless" Rob Lisita (14-7 MMA, 1-2 ONE) is another fan favorite fighter. Lisita is an exciting fighter from Phuket Top Team & is one of the top Australian featherweights in the world today. He was actually offered a contract by both the UFC & Bellator, but chose ONE Championship for a number of reasons including ONE's superior ruleset.

"The ONE FC rule set is great & is truly as real as it gets. Matt Hume is a former fighter with a great wealth of MMA experience so the match ups he makes are always exciting and Victor Cui is a great guy, they both show a sense of understanding that we are in this together. Since joining ONE FC I've been made to feel I joined a family." 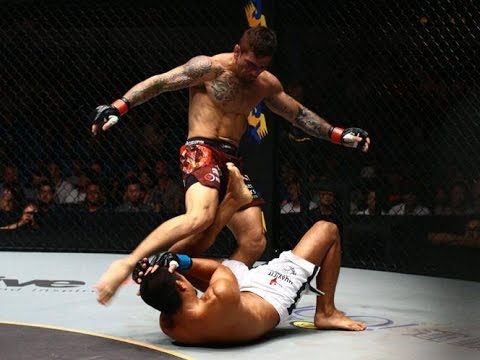 Lisita's ONE Championship bouts to date have been memorable as he knocked out former Legend FC champ Yusuke Kawanago in under 30 seconds in their rematch for his ONE debut, & then took part in the 2014 Fight of the Year Candidate against former URCC champ Kelly before next getting choked out by M-1 champ Marat Gafurov in another exciting fight.

Win or lose, you can always count on Ruthless Rob Lisita to BRING IT!

Check out the full fight slugfest of Lisita's awesome KO of Kawanago:

An owner of 6 first round finishes himself, Lisita promises to bring the fight to Nastyukhin in what could possibly be one of the most explosive & exciting bouts on ONE Championship: Warrior's Quest in Kallang, Singapore on May 22.

ONE Championship sure is going big for Memorial Day Weekend! The card is chalked full of amazing fights! Prelims are now FREE on Facebook too! 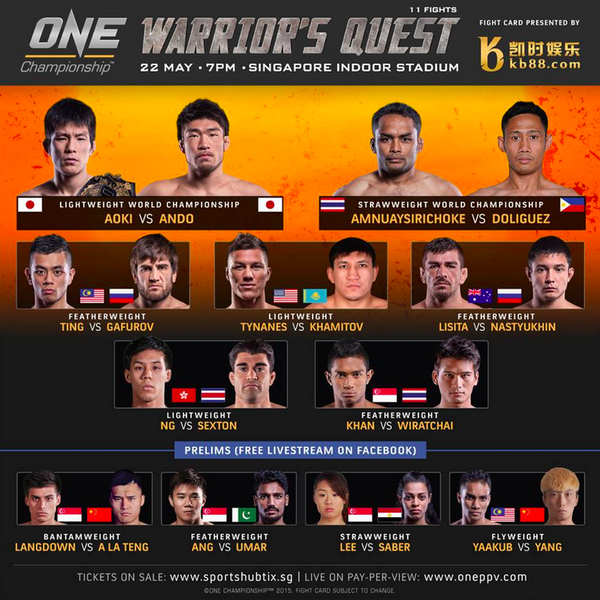 ^ Such a FANTASTIC & UNDERRATED Card! If you've been watching ONE Championship then you know a lot of those fighters, and if not don't even trip! I'll have you covered this week with my fightweek articles of all my favorite matchups!

As always, THANKS for reading & ENJOY the fights!

p.s. The quotes were from James Goyder's excellent articles on Nastyukhin (link) & Lisita (link). Also, all gifs courtesy of @ZProphet_MMA