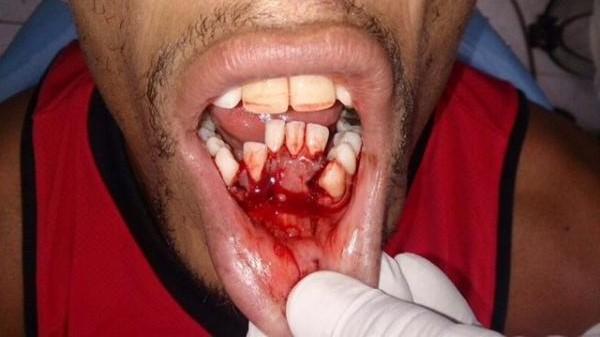 On April 10th, the story broke: Yoel Romero was out of his eagerly-anticipated UFC on Fox 15 fight with Jacare Souza due to an injury suffered in training. A palpable lamentation befell the MMAspehere, even as a sense of resignation mitigated the agony. Such announcements have become so commonplace, they are rarely surprising and even expected. When journeyman Chris Camozzi was fed to Jacare instead as a sop to the expectant fans, it embodied the essence of the UFC's training injury problem, and raised the obvious question: why doesn't the UFC do more to stem this epidemic, this noxious 'injury bug'?

Few scourges wreak as much havoc on the business of the UFC as fighter injuries. Few scourges aggravate fans so bitterly as having fight cards altered- and often diluted- after tickets have been bought, than the dreaded announcement that Fighter X has been pulled from a much-anticipated card due to injury. This scourge also threatens fighters' short-and long-term health. It is a major business risk as defined by its frequency and impact, and best practice in corporate risk management requires that the UFC be more proactive in tackling this plague.

Corporate risks that occur frequently and which have a devastating impact when they do occur, are the most crucial and urgent risks to address. So just how common are injuries in the UFC, and what is their impact?

These statistics show that not only is the percentage of fights bedeviled by injury unacceptably high, the frequency of injuries in percentage terms is not declining. And what is the cost of these injuries? Only the UFC can precisely estimate the financial costs, but they would certainly include:

1. The Opportunity cost of lost big fights: When big name fighters like Jon Jones, Cain Velazquez, Dominic Cruz, Yoel Romero, Chris Weidman, Rashad Evans, TJ Dillashaw, etc, are pulled from major fight cards and deposited on the shelf for extended durations, the revenue they would have generated for the UFC during their hiatus is gone forever. The lost time, lost fights, and lost money will never be regained.

2. Medical and Insurance Costs: The UFC indemnifies fighters against injuries suffered in training. The more frequently fighters get injured, the higher the UFC's insurance premiums and out-of-pocket medical costs. This is a real, onerously high cost that must run into the millions of dollars annually.

3. Marketing and Administrative Costs: When a fight is cancelled due to injury, promotional posters need to be reprinted, promo videos re-shot, and logistic arrangements changed as the UFC scrambles to find, medically clear, transport and promote short-notice replacements.

4. Lost Ticket and PPV Revenue: Many fans, when faced with a stacked UFC card, now believe them to be too good to be true. Many are wary on splurging on expensive tickets and travel costs, in the expectation that the card composition will be changed and diluted before fight night, replacing headlining stars with hapless journeymen meekly and gamely going to their sacrificial immolation (something Patrick Cummins and Chris Camozzi can identify with). Over time, as fans have less faith in the UFC's ability to deliver on promised cards, this will have a chilling effect on ticket sales. Plans to buy PPVs will be cancelled at the last minute, meaning revenues will be lost.

5. Intangible Costs: These financial costs exclude other real, but hard to quantify costs as fan disillusionment, long-term impact on fighters health, demotivation of fighters and reputational damage to the UFC.

Despite these obvious and massive inimical effects on business, there is still an insouciant attitude amongst MMA coaches and UFC executives towards the problem. When Jon Jones was pulled from UFC 178 due to a training injury, his coach Greg Jackson, who must bear at least some responsibility for the tragedy, basically shrugged his shoulders and said 'shit happens'. When UFC President Dana White, finally realising something must be done, recently called out the AKA gym for its 'stone age training practices, some of the fighters, including the perennially-injured heavyweight champion, Cain Velazquez, defiantly promised to continue their perilous training practices.

Clearly, something must be done. But what? Injuries are inevitable in martial arts gyms: the entire purpose of martial arts training is to inflict injury on an opponent. However, will a zero injury rate is impossible, there are measures that can be taken to significantly reduce the injury rate. And considering the costs outlined above, even a 10% reduction in injuries would have massive salubrious effect on the UFC's business and the fan experience. Here's what should be done:

1. Collect, Analyse and Publish Data: There's a dictum in management that what gets measured gets managed. To tackle this problem, the UFC must first fully understand it. Every time a fighter is pulled from a fight due to a training injury, the UFC must dispatch a team of investigators to the gym and make the fighter and his coaches complete a questionnaire explaining the circumstances that led to the injury. These should then be compiled in an official UFC database, and the results published regularly on the UFC website. At a minumum, the database and reports should show:

The results should then be analysed vertically and horizontally, to identify root causes and trends. The data will tell us what kinds of injuries are most common (anecdotally, knee injuries seem to be most prevalent, but hard data is better than anecdotes), what kinds of fighters are most at risk (e.g. how does the age, weight or sex of the fighter affect their injury risk), what training practices are most dangerous (anecdotally, wrestling practice seems to be the primary evil, but again data speaks louder than anecdote), and which gyms are the most destructive of fighters' health.

The data should then be published officially on the UFC's web site, with a view to being widely discussed among the MMA media, fans and gyms.

2. Constructive Engagement: On the strength of the data, the UFC should then meet with, encourage, cajole and educate MMA gyms and fighters on best practices in training methods. Sports scientists can advise on why certain training methods are inherently dangerous. Experienced coaches from traditional martial arts and other sports can be encouraged to mentor MMA coaches on safe drilling and modern training techniques. Seminars can be organised to encourage sharing of ideas, practical lessons and best practices. Simply by raising the profile of the issue and fostering discussion and knowledge-sharing, a culture of safe training can be embedded in MMA gyms.

3. Naming and Shaming: An excellent analysis was done of the injury rates per UFC gyms in 2014. The results were fascinating: the most dangerous gyms for a fighter to train in according to the report, are Roufusport and Novo Uniao. The safest are (ironically) AKA and team Alpha Male.

Publishing these statistics regularly on the UFC websites and publicly shaming the most career-destroying coaches, will immediately give them a strong incentive to review their training practices. The very act of publishing these figures will spur action because nobody wants to be bottom of the class. Coaches will immediately start benchmarking versus the best gyms, learning more modern training methods, and cross-pollinating best-practices and training tips. This would accelerate MMA training's emergence out of the stone age mentality which erroneously believes that hard, brutal training is somehow the only way to prepare fighters for combat.

4. Brandish The Big Stick at Fighters: In the insurance industry, there's a concept known as 'moral hazard'. It refers to the fact that people who say, have their bicycles insured against theft, are more likely to leave their bicycles unlocked- which increases the cost for the insurance company. Insurance companies therefore try to work clauses into their contracts denying coverage to clients who are willfully negligent, to incentivise more responsible behaviour.

Moral hazard in MMA logically suggests that fighters who know the UFC will cover their medical costs are marginally less careful in training. If the UFC threatens to withhold coverage for fighters whose injuries are found to be the result of reckless, excessively violent or irresponsible training, a few would be a little more careful.

Of course, the UFC would need to be careful of the reputational risk involved in not paying for fighters' injuries. This means this threat would very rarely be carried out. But making injured fighters jump through hoops to prove why they were NOT training recklessly, and brandishing the threat of withholding coverage over their heads, should reinforce the fact that having a fighter's medical costs paid for is a conditional benefit, not an absolute right. This should motivate the more reckless fighters to train a little more carefully.

5. Brandishing The Big Stick at Coaches: The second threat the UFC can use is legal action against the most culpable gyms. The UFC has legal standing to claim that by recklessly damaging fighters during training, the most culpable coaches are causing the UFC a direct financial loss. The UFC can then threaten to sue for damages if these gyms don't reduce their injury rate to something closer to that of the safest gyms.

Again, the UFC doesn't need to actually sue Novo Uniao or Roufusport, or even to have a clear legal right to do so. It just needs to make it clear that it reserves the right to protect the safety of its fighters and its revenue from reckless coaches, and that if forced to, it will sue. No gym owner wants to incur legal fees in a fight with the UFC. So the likes of Javier Mendez, Duke Roufus and Greg Jackson would be a little less cavalier about fighter injuries after the first time they get a threatening letter from the UFC's legal department.

In conclusion, gym injuries are an inevitable consequence of martial arts training. Combat sports are designed to damage bodies, so damaged bodies are inherent in the nature of the beast. But there are acceptable parameters to every sort of risk, and the UFC's current injury rates are far above what is tolerable.

The UFC brass therefore needs to proactively own the problem, take the measures outlined above, and significantly dent the injury rate. The resulting positive multiplier effect on fan satisfaction, fighter earnings, fighter health and the UFC's own bottom line, are more than reason enough to take this tiger by the tail.