The bell sounded to end the round. But both men didn't turn toward their corners. They stayed near the middle of the Octagon, facing one another.

Robbie Lawler leaned his head to the left to spit out some blood -- and possibly a chunk of his lip. Rory MacDonald kept his gaze squarely into Lawler's eyes. Referee John McCarthy got between the two to make sure they didn't continue throwing blows.

There didn't seem to be any intentions of doing that from either Lawler or MacDonald. The staredown was more of an acknowledgement, of each other and the impossibly violent fight that they were participating in.

Not long after, Lawler landed a clean left hand to MacDonald's nose. The challenger crumpled to the floor, ending the fight. Lawler had retained his welterweight title at UFC 189 on July 11 in Las Vegas.

It was then and it remains now the best MMA fight of 2015.

What many people forget is that MacDonald was winning the fight heading into the final round. It was surely close, but all three judges had the Canadian up 39-37. Lawler needed to finish and finish he did. It wasn't just the straight left that ended MacDonald's night, more the accumulation of hard blow after hard blow from all angles.

The two were cautious in the first round. MacDonald barely squeaked it out. The violence had not yet begun. In the second, MacDonald gets in a head kick and works a beautiful jab, but Lawler bloodies his opponent with one-two combinations, his left hand thudding against MacDonald's head over and over.

The tide turns back toward MacDonald in the third. But not before Lawler gets in big blows at the start. MacDonald seals the round in the final minute with a head kick that staggers Lawler followed by knees and elbows -- and more elbows. MacDonald nearly finished.

MacDonald uses that same head kick to crush Lawler again in the fourth. Lawler was in big trouble, but told McCarthy multiple times he was OK. MacDonald poured it on, but could not take the champion out. Lawler rallied a bit at the end of the round with those left hands. MacDonald's face was a bloody mess -- but he was five minutes away from becoming the UFC welterweight champion. And, perhaps knowing that, stayed extra long in the center of the cage and stared Lawler down.

MacDonald, though, couldn't help himself. He got into a firefight with Lawler early in the fifth and very few can make it out of those with "Ruthless" and fight on. Lawler lands the crushing blow to MacDonald's nose to end the night and make sure the bloody MacDonald lives up to his own nickname, "The Red King." The TKO came at 1:00 of the fifth round.

There are an incredible level of high-level fights this year in MMA -- perhaps more than any other year ever. But Lawler-MacDonald was a step above, the kind of visceral, back-and-forth affair we'll be talking about for years to come. 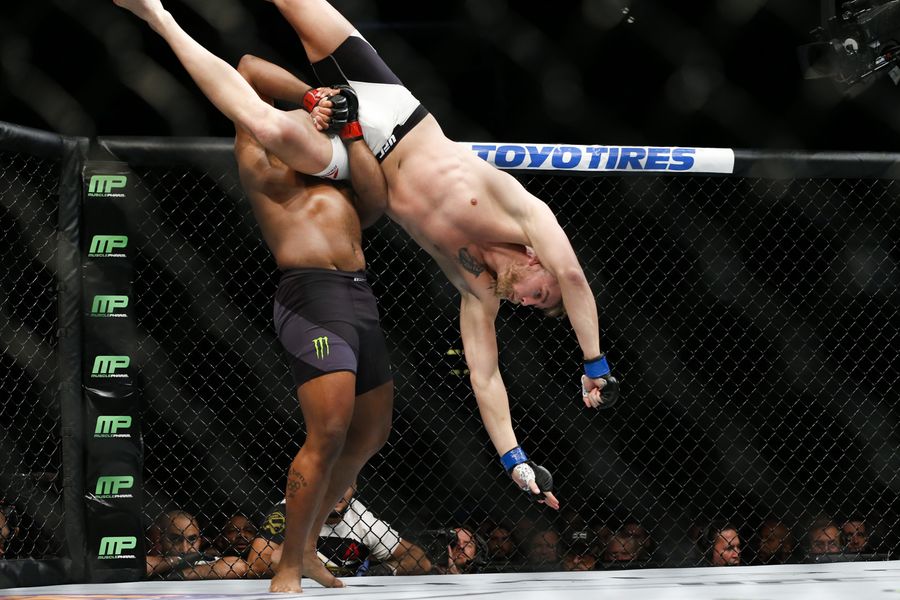 Gustafsson always comes so close, doesn't he? He almost took the light heavyweight title from Jon Jones at UFC 165 in September 2013. And was within a few hairs of beating Cormier here in the third round after a big knee. But Cormier came back and, after winning the first two rounds, gutted out at least one of the next two to earn a split decision victory. Both men took a huge beating. Gustafsson was a bloody mess afterward, but reminded everyone his place as an elite light heavyweight. Cormier, meanwhile, cemented himself as the light heavyweight champ with his first title defense. 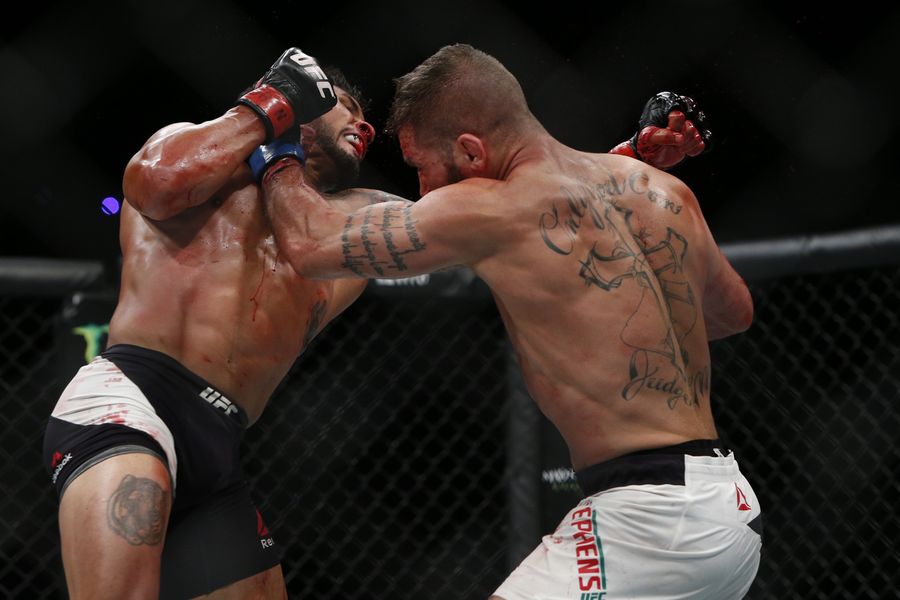 In some years, Stephens vs. Bermudez would have topped this list. However in 2015, it wasn't even the best fight on the card. That's how good UFC 189 was, with Robbie Lawler vs. Rory MacDonald in the co-main event. Stephens-Bermudez was an incredible back-and-forth affair. Both men got dropped repeatedly. Stephens was left bloody in the first round, but came back to land big bombs on Bermudez in the second. A jumping knee -- straight up as Bermudez came in -- finished the deal at 0:32 of the third for Stephens. An action fight with a sudden, out-of-nowhere finish. Incredible.

Defense was merely a rumor in this fight -- as it was in the rematch six months later. Gaethje is an all-action fighter who pushes a ridiculous pace and throws nothing but power punches. Palomino, with an iron chin and big power in both hands, was the perfect matchup for a classic fight, which is why World Series of Fighting did it all over at WSOF 23. The rematch was great; the first fight was incredible. Gaethje won both, here via TKO in the third round with leg kicks, of all things.

No, this fight didn't exceed the length of one round. It doesn't matter. There wasn't a more exciting 4:40 in all of MMA this year. Arlovski rocked Browne with a right hand and flurry in the first minute. In the second minute, Arlovski landed a back fist and hard right against the cage. Arlovski hit another back fist and combination with 90 seconds left in the round. Browne was in all kinds of trouble, but dropped Arlovski with a massive right hook with a minute to go. Arlovski gets up, lands a knee and second later lands an uppercut that sends Browne limp against the fence. Referee Mark Smith steps in with 24 seconds left in the best round of 2015.