I am a 'Just Bleed' fan. The thought of Melvin Manhoef fighting Doug Marshall this Friday on Bellator has gotten me giddy like a school girl at a One Direction concert. On Meth.

It is difficult to find two men who embody the spirit of a brawler more. As a matter of fact, if that fight lasts longer than one round I will change my username to Mrs. Douchetality. The potential for swift violence is staggering. There is no such thing as a guaranteed barn-burner, but when one does occur there is no spectacle quite like a high octane, no-fucks-given MMA brawl. My favorite fight of the last five years was Brian Stann vs. Wanderlei Silva. Before that? Don Frye vs. Takayama, of course.

The brawler is fun and flawed. Most brawlers are unlikely to challenge the top echelons of the sport, unless they evolve their style to the highest level, such as Robbie Lawler. Hyper-aggressiveness is an asset that should not be overlooked. When combined with good technique and a solid athletic base, a brawler is a scary opponent to stare at across the ring. Wanderlei during Pride was terrifying. Shane Carwin simply steamrolled his way to a title shot. I have a true love for the fighter who stops at nothing to destroy their enemy, even to their own detriment.

There seems to be some consensus amongst fans that if you enjoy wild brawls over 'high-level MMA', that you are misguided. However, do not mistake me for the dreaded casual fan. You know, the ones who have TapouT stickers on their trucks, and shout profanities during shows while drooling Busch Light down their Affliction T-shirts. The guys who can't name a single submission other than a guillotine choke, and think every fighter below lightweight is a 'pussy'.

It's not that I don't respect the fighters who "fight smart": those that compete with a tactical mind using a diverse skill set. I still watch Machida's in-and-out striking displays closely, I admire Ben Askren's relentless wrestling style, and I fully realize how skilled Demetrious Johnson is at transitioning between every aspect of MMA. Hell, I even get impressed with Bryan Caraway's submission grappling.

But nothing can top a true brawl. Few things get spectators more excited – even the fans who claim to enjoy the purely technical aspects of martial arts. That special moment when two guys just decide, "Fuck it. I am not taking a step backwards, and I am going to keep swinging until the other guy falls." Try to watch one of the classic brawls without your heart rate speeding up. The fanatical hurricane of testosterone, blood, and hay-makers is truly a sight to behold.

So here's to the brawlers. You have a special place in my heart, and a favoured seat at the table of the MMA Gods of Violence. This weekend, may we receive more blood for our chalice, when Manhoef, Marshall, Hunt, and Nelson all make their sacrifices to inject some more brutal entertainment into our lives. 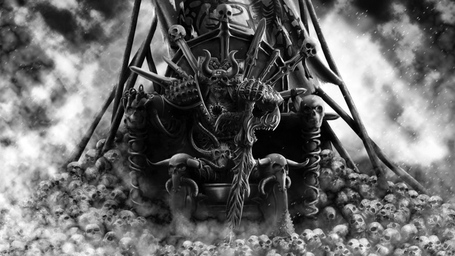