Jon Jones on Daniel Cormier's fitness: 'I mean, we all see what he looks like'

Daniel Cormier postponed a knee surgery in order to get his shot at Jon Jones' UFC light heavyweight championship.

And the champion is first and foremost among those who wonder if Cormier, who has spent the bulk of his MMA career at heavyweight, will be able to get into proper condition for a five-round main event come Sept. 27.

"As far being fit, I mean, we all see what he looks like," Jones said on Monday's edition of The MMA Hour.

Cormier took the UFC 178 opportunity on two months' notice when Jones' original opponent, Alexander Gustafsson, had to drop out of the bout due to a knee injury. While Jones tried to soften his words, it's clear he feels he'll have the edge in conditioning when the two get into the Octagon in Las Vegas. 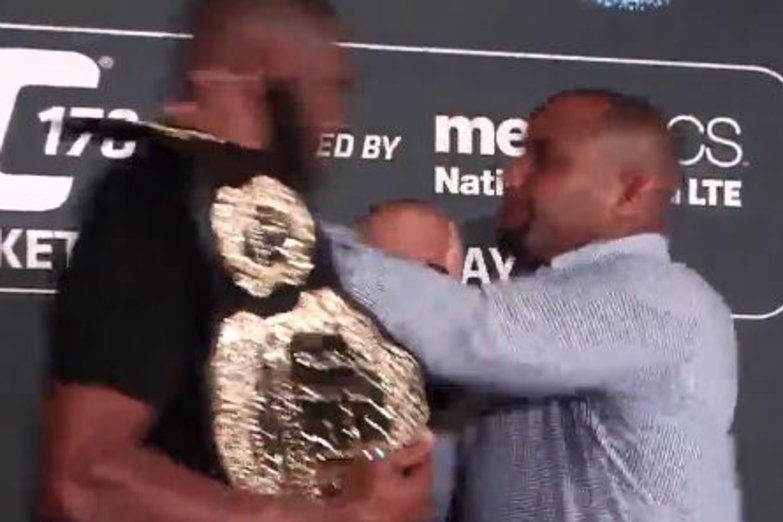 "Maybe I should have had a better choice of words," Jones said. "I don't think he's in the greatest shape. Not only does he have to lose weight to get in shape, but he's going to have to focus on his tactics to beat me. I just think that's a tall order."

The animosity between Jones and Cormier has exploded on social media since the bout was announced, with the two taking swipes at one another on Twitter. But the tension simmered long before the bout was announced. According to Jones, the bad blood started when the pair were introduced backstage at UFC 121 in Anaheim in 2010.

Jones claims he wasn't aware of Cormier's Olympic wrestling pedigree, and that Cormier took it to heart.

"The whole backstory between me and Daniel Cormier, it's really ridiculous," Jones said. "Its basically, I ran into the guy behind the stage at the Brock Lesnar-Cain Velasquez fight. I think he approached me, or I approached his group, I'm not sure. He introduced himself, so I sarcastically said to him, ‘So you're a wrestler,' he was like ‘yeah, I'm a wrestler blah blah blah.' I was like ‘dude, I bet I could take you down.' It was me trying to be personal, it was me trying to be friendly, it was me trying to have an inside joke with someone I didn't know.

"I had no clue he was such a prideful person, and at the moment I guess he just got really offended, which was very immature on his part," Jones continued. "He decided I had disrespected his great name he decided he didn't like me and had some sort of personal vendetta against me. I think the whole thing's silly."

Of course, that's only one side of the story. But either way, Jones says he has no hate for his opponent on Sept. 27.