SACRAMENTO, Calif. - T.J. Dillashaw was put in a no-win situation and still came out a winner.

He didn't want to give Renan Barao a rematch at UFC 177 just three months after kicking Barao's tail all over the Octagon. He still took the fight.

It wasn't Dillashaw's fault that Barao dropped out the day before the card. Offered a dangerous opponent on one day's notice in Joe Soto, Dillashaw accepted the bout and proclaimed "I don't want to be a diva champion."

Even getting past those hurdles, there were still plenty remaining in his path.

Fortunes changed for five at UFC 177 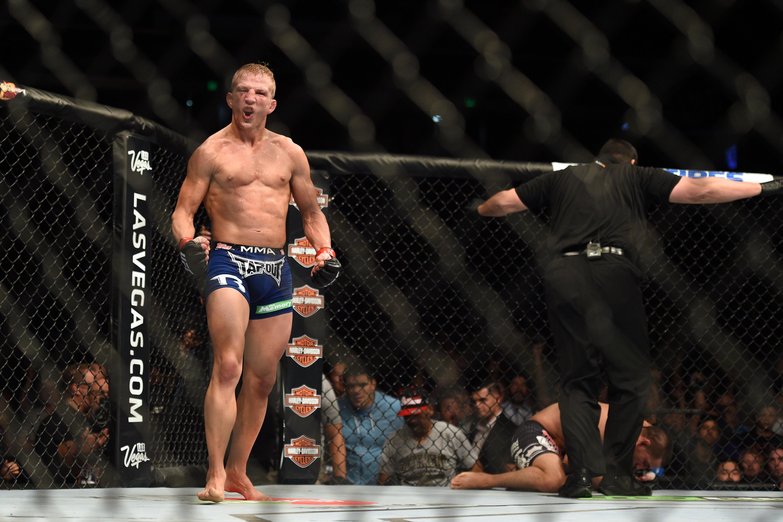 The pay-per-view show, while limited in names, was strong in action with a number of fighters making strides in their careers.

What if Soto had pulled off the upset in front of Dillashaw's hometown crowd at Sleep Train Arena?

What if Dillashaw did to Soto what Daniel Cormier did to Patrick Cummins and finished him in short order? Soto would have been dismissed as a fraud.

What if Soto went the distance? It would have been considered a lackluster performance on Dillashaw's part.

Instead, Dillashaw managed to shine. Many a fighter would have coasted in the closing moments, knowing they were way ahead on the scorecards. Maybe Dillashaw had been stung by one too many of Soto's sizzling counters and didn't want to leave anything to chance. Either way, with his spectacular head-kick finish, Dillashaw became the first fighter in UFC history to record back-to-back fifth round finishes, showing the heart of a champion an a killer's finishing instincts.

"I knew Joe Soto was a tough fight, I've practiced with him," Dillashaw said. "It was a tough one, to switch opponents at the last minute was stressful."

No doubt. Dillashaw didn't deserve what he was put through on Friday - and let's be clear, the UFC should not be putting headliners in this position by running too many shows and leaving their cards susceptible to such mishaps - but there's no doubt, on a visceral level, people still love fighting champions. Dillashaw passed all his tests with flying colors.

"I want a legacy as a champ who takes opponents on one day's notice," Dillashaw said.

He's well on his way.

"A lot of people was saying that I fight for points. But I wanted to go in there and I wanted to show that I can finish fights and I can't leave it all in the hands of the judges." - Bethe Correia, on her finish of Shayna Baszler.

"I controlled a grown man and he couldn't do anything. If we were in jail, he'd be in trouble." - Danny Castillo making an, umm, interesting analogy about his fight with Tony Ferguson.

"I have always been confident in myself, that's why I took the challenge. I was having fun in there. When you get in the Octagon, that fighting warrior spirit comes out. I was enjoying it." - Joe Soto.

Up: Joe Soto Sometimes, even the guy who doesn't get his hand raised at the end goes home a winner. That was the case for Soto, the former Bellator featherweight champ. Very few outside of California knew of Soto's capabilities before last night, and falsely assumed the UFC just tossed a scrub into a title fight. Dillashaw, who had trained with Soto, understood he was in for a battle. Soto went for broke and justified his spot. Over the first half of the fight, sure, Dillashaw was racking up lopsided punch stats, but Soto fearlessly stood in the pocket and answered the champ's bunches of punches with hard counters that landed. By the second half of the fight, the fact Soto had trained for a three-round fight became apparent, as he slowed considerably, and Dillashaw, to his credit, finally caught him in the fifth. But the bottom line is, 72 hours ago, Joe Soto was an unknown; today, he's a fighter whose next fight will be one to circle on the calendar. That's winning the war even when you lose the battle.

Down: Nova Unaio. Everyone has lined up and taken their kicks at Barao, so let's step back a little bit and look at the bigger picture. For years, Jose Aldo has gone through difficult weight cuts, most notably at UFC 129. Now they're responsible for the first UFC title fight weight-cutting mishap since Travis Lutter missed at UFC 67 on Super Bowl weekend in 2007. And even Lutter still managed to get in the cage for a non-title fight. And, someone has to point this out: Nova Uniao already has a weight-cutting death on its watch in Leandro Souza. And they're insisting on keeping Barao at 135? This is jaw-dropping irresponsibility. This is where MMA being such a decentralized sport hurts, because in a more organized system, a camp with such an egregious and cavalier track record toward fighter safety would be suspended until it got its act together.

Up: Carlos Diego Ferreira. A Brazilian who is an ace on the ground, can brawl on his feet, and speaks fluent English, to boot? Yes, please. the 11-0 Ferreira's Fight of the Night bonus for his finish of Ramsey Nijem was well-earned.

Down: Henry Cejudo. It feels wrong to question the commitment of someone who won an Olympic wrestling gold medal, which requires sacrifice to a degree few of us will ever know. But there have simply been too many whispers around the sport about whether MMA is something Cejudo really has his heart into, and this is the wrong sport to do half-assed. Cejudo really needs to think about whether this is for him, and if so, dedicate himself to going up to 135, because he's clearly no flyweight.

Up: Bethe Correia. Heading into Saturday night, Correia was undefeated, and had stirred up controversy by mocking the Four Horsewomen ... but her actual fights were far from exciting experiences. Boy, did that change on Saturday night. Correia shook off a slow start against a crafty veteran in Shayna Baszler, then unleashed a ferocious striking display, a masterful blend of precision, positioning, and power. The rivalry with Ronda Rousey's crew would certainly help sell a title fight. But Correia did pushed her way into the title picture the best way possible, by earning it in the cage.

There isn't a heck of a lot to nitpick in terms of judging and officiating last night. I had Danny Castillo 29-28 over Tony Ferguson; two of three judges saw the fight 29-28 Ferguson. But I think most are in agreement that Ferguson clearly won round one; Castillo round three, and round two was close, so there's no robbery.

You know what isn't a great call? Using your television time to blast reporters when you've got a pay-per-view to sell. So White, who didn't show up in Sacramento until Friday, was mad at Dave Meltzer. Great. How is ripping into him on national television in the moments leading up to your big event going to get even one more person to buy a pay-per-view? By the way, that $700,000 disclosed gate at Sleep Train Arena was the second-worst out of eight Zuffa shows in Sacramento going back to 2006, including the WEC. The only one with a lower gate was WEC 46, which did $550,000. Is that Meltzer's fault, too?

Fight I Want to See Next: T.J. Dillashaw vs. Dominick Cruz

Don't get me wrong here: On some level I know that Raphael Assuncao has the best case for the next shot at Dillashaw's title. If he beats Bryan Caraway in October, than that's seven wins in a row for Assuncao, including one over the champ. Still, if Cruz returns to form against Takeya Mizugaki next month - and that's a big if - I simply want to see this fight more. Let's not forget Cruz is still 20-1, he was considered among the top pound-for-pound fighters when he was first hurt, and he never actually lost the title in the ring. If both Assuncao and Cruz shine in their upcoming fights and it comes down to a coin flip on who should get the crack at the gold, I say give the former champ his chance.