Sometimes, a fight occurs which shakes up a division's foundations. Other times, the bout confirms what most people suspected they already knew.

Such was the latter on July 26, when "Ruthless" Robbie Lawler and "The Immortal" Matt Brown went toe-to-toe in the main event of UFC on FOX 12 in San Jose.

We had a pretty good idea that Lawler, who came into the bout the winner of four of his past five fights, was well on his way to a rematch of the only loss in the bunch, his narrow decision loss to Johny Hendricks in the bout to fill the welterweight title in March.

We also knew that Brown, while having his work cut out for him, was a live underdog who at best was plenty capable of pulling off the upset and at worst would make Lawler work for his win.

The latter was exactly how things panned out. Sometime early in the fight. Brown suffered a hand injury which sent him to the hospital, but that didn't stop him from going all-out in a frantic fifth round which ranked among the most frenzied five minutes of fighting seen in the sport this year.

Lawler held on for the unanimous decision, and cemented his spot as the next challenger to Hendricks' title. Brown had one of those performances in which the fighter gains esteem even in defeat. And that was reflected in the latest edition of the SB Nation welterweight rankings.

Lawler retained his No. 2 spot in the rankings behind Hendricks, earning all six second-place votes. Brown, for his part, stayed No. 6 in the rankings. And with that as the only divisional bout of note since the last time we compiled the rankings, that's about a wrap on things, save some minor tweaks here and there. Hendricks, Lawler, and Rory MacDonald were unanimous picks for the top three positions, respectively.

Of note: Nick Diaz is out of retirement, and once again eligible to be ranked. He did not receive a vote, from reasons ranking from inactivity to being three years removed from his last victory to the fact his next fight is at middleweight.

(Scoring: Fighters are given 10 points for a first-place vote, nine points for a second, etc., down to one point for 10th place. The results are then tallied up and presented here. Official SB Nation rankings policy: Fighters under commission suspension are ineligible to be ranked during the duration of their suspension or if they have licensing issues. As of this writing, this does not affect any welterweights of note. Also, since St-Pierre relinquished his title and walked away from the sport without any guarantee of returning, he will be regarded as a retired fighter for rankings purposes and is ineligible). 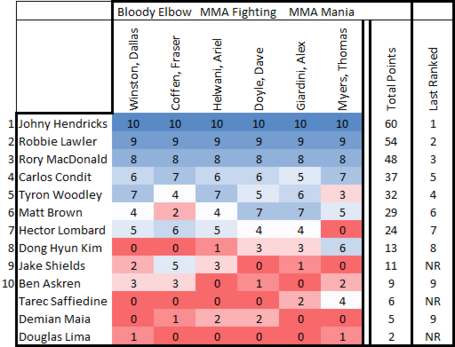 1. Johny Hendricks (16-2, 60 points): The champ is still waiting on a doctor's clearance before he can resume to all-out training as his biceps injury heals.

3. Rory MacDonald (17-2, 48 points): MacDonald has more to lose than gain when he meets 11th-ranked and oft-injured Tarec Saffiedine in the main over of October's UFC Fight Night card in Halifax, Canada.

4. Carlos Condit (29-8, 37 points): While there's no timetable yet for his next fight, Condit recently posted video of his first bag training session since his ACL injury in March.

5. Tyron Woodley (13-3, 32 points): After looking bad in a loss to MacDonald in June, Woodley got right back on the horse and stepped in for Hector Lombard against Dong Hyun Kim on Aug. 23.

6. Matt Brown (19-11, 29 points): No point in speculating on what might be next for Brown, since much is likely to change in the time it takes his hand to heal.

7. Hector Lombard (34-4-1, 1 NC, 24 points): Tough break for Lombard, who suffered a herniated disc just as his UFC career was beginning to pick up real steam.

8. Dong Hyun Kim (19-2-1, 1 NC, 13 points): A solid competitor who has long been just outside the big boys of the division, Kim has his best chance to seize the spotlight with his fight against Woodley.

9. Jake Shields (29-7-1 1 NC, 11 points): Shields, who was cut from the UFC after winning three of his past four fights, had to pull out of his WSOF debut against Jon Fitch due to a shoulder injury.

10. Ben Askren (13-0, 9 points): The undefeated former Bellator champ looks to add OneFC gold to his collection when he meets champion Nobutatsu Suzuki on Aug. 29 in Dubai.