Morning Report: Michael Bisping and Luke Rockhold up the ante with purse wagers and fatherly abuse

Luke Rockhold is reportedly in talks to face Lyoto Machida later this year, but you'd never know it hearing his back and forth with Michael Bisping. 'The Count' had barely been rid of Cung Le long enough to put on a shirt before picking up his campaign to face Rockhold, who also happened to be cageside for the event in Macao.

"There's an idiot called Luke Rockhold who doesn't stop talking about me," Bisping told Kenny Florian in the Octagon. "I think he has the hots for me, to be honest. Luke Rockhold, you're calling me out. If you want to do it, let's dance. Here I am. I'm going to beat Luke Rockhold and then I'm taking the title. Make no mistake."

Referred to as a 'lanky streak of piss' by Bisping at the event's post fight press conference, Rockhold stoked the fire of the rivalry earlier in the week by offering a friendly wager.

The feud became a family affair the morning after at breakfast, but the details remain sketchy.

@LukeRockhold just caused a scene while I was having coffee with my father. #classless

@bisping your father and his little friend have been giving me shit all weekend. You have no room to talk about class

Has the job of a UFC matchmaker ever been so easy? Let the 'Vitor Belfort Fan Club' work this thing out.

O by the way people @Bisping wouldn't take my bet.

'Rough night.' Dana White says he and Nate Diaz starting talking again during a night on the town with the cast of TUF 20. 'We got together in a room, and where he is and where we are, we're not even close.'

UFC 178 is special. Dave Meltzer explains how to market around the weird situation where a card's headliner isn't really its main event, maybe not even co-main. 'It is unheard of in UFC history to have a television undercard fight (Cruz vs. Mizugaki right now is scheduled for the FS 1 prelims, not the pay-per-view), to have equal interest in the pay-per-view main event.'

'A potluck of would-be contenders.' Chuck Mindenhall tries to sort out the UFC's mess of a lightweight division and pick Rafael dos Anjos' next opponent.

'Sucking a little less.' Anthony Bourdain explains how training in Brazilian Jiu Jitsu along with his wife and daughter has changed his life. "You asked me a couple years back if I would ever train, and I said to you, "Hell no!'" Now, I'm like all of these other sick f**ks out there. If I don't train, I'm like going through drug withdrawal."

Presser highlights from Tulsa and Macao.

Hector Lombard trying to explain what the hell 'Showeather' is all about.

Countdown to UFC 177: Dillashaw vs Barao

@BlessedMMA @FOXSports1 u always deliver. I'm sure ur gonna do just fine

Woke up feeling like a truck hit me! Thanks @ufc and to all my friends and family and the great fan's here in Tulsa! #livinthedream

With my crew after the win! @dethrone pic.twitter.com/aDr8i692f3

I just wanted to take a moment and thank my great team. I had great training, amazing energy, and so... http://t.co/TbStb3OTy0

Thank you guys so much! You all make my job so awesome! Big thank you @ufc @danawhite @lorenzofertitta & Joe Silva... http://t.co/BRyzG7Jy1a

The place where i took the next step towards the belt. http://t.co/ttZUut9KqO pic.twitter.com/7v0pummfWW

Work is done! I'm back to take my city back! #ferguson #stl #ufc" @ufc pic.twitter.com/LuDMGOx9hR

(Each climb there is a descent, the climb is difficult :( Thanks for all the support.)

I'm a little bumped and bruised. And a little tired.. but I'm happy for the opportunity thanks #UFCTulsa #UFCFightNight I'll be back..

Thank you to everyone for your support leading up to tonight, it means everything to me. I can't wait to bring you another victory.

Thanks for all of the support. I will be back to the drawing board and figure out my cardio issues. Not the last of me. @ufc #cardio

Tulsa its been a fun life experience. Back in the gym Monday waiting on that call I was hngry now im starving@IridiumSports @ufc @danawhite

Think I may have accidentally spat blood on @danawhite mid fight last night. There was enough to go around. Sorry mate!

Thought i had nicked it on points after nearly knocking him out but judges didnt agree. Thanks for all the support, im guna get fat now! 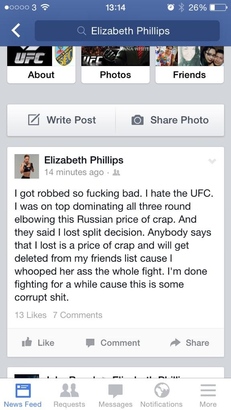 This is MMA @ufc pic.twitter.com/Gsfl6hHEr3

"@deanahall67: @Cowboycerrone @Budweiser should pay you for that endorsement..." They keep the lake house stocked pic.twitter.com/ZuyrS0Jpms

I think she got her.

Today's Fanpost of the Day comes via Sashimi90210.

The Post-Ben Henderson is greater than the sum of the Lightweight Divisions parts save Anthony Pettis is upon us.

Finally, after a continuous onslaught of truly deplorable criminal allegations and a constant stream of steroid outings, a high level MMA bout was contested on FS1 where the chaotic nature of cage fighting stole the limelight back away from the darkest corners of sports culture. Amidst real and perceived over-saturation, watered down cards, and a seemingly endless army of armchair Bocek's declaring the sport so dirty that we should just accept the 90% and move on, the UFC was able to give us a fight of consequence.

Recently, there has been a lot of stories that have continuously ask us, as fans, why we watch. A steady stream of ammunition delivered to those whose only aim is to dig deep enough to cover the sports detractors has littered sites like this one, and, finally, finally we have a result to point to that says, "this is why we watch". Henderson, one of the sports premier athletes (whether you like it or not), entered the fight with, according to many, multiple routes to victory before being led astray by a knee and a left. Then, even after such a surprising defeat, Bendo sums up the last few weeks for us fans in one simple statement, "You have the ups and downs. You have to take the good with the bad. That's the way it goes sometimes."