UFC 178 will be like no UFC show in history

UFC 178 has the unique distinction of having a championship fight and main event, that, at best, is the fifth on the list of the fights the public will most care about on the show. Given that, it creates some interesting questions regarding both match order and preshow promotion, because the usual tradition of building around and emphasizing the title fight will pay minimal dividends.

With the signing of Eddie Alvarez and his debut fight with Donald Cerrone, UFC 178 will be a unique event, both in promotion and presentation.

UFC has a rule of thumb that if there is a championship fight on a card, it is the fight promoted the hardest, it is the fight the show is pushed synonymous with, and it goes on last, in the main event position. Most often, that's simply logic. The title fight is, more than 90 percent of the time, going to draw the buyers and have the most interest. While there are outliers, like big grudge matches that can garner more interest than a title match, they are rare. In those cases, UFC has almost always gone with the idea of sticking to tradition and presenting the title match as the main event.

And UFC's biggest fights, historically, have been a combination of title match and grudge match, whether it's Brock Lesnar vs. Frank Mir or Randy Couture, Tito Ortiz vs. Chuck Liddell, Georges St-Pierre vs. B.J. Penn or Nick Diaz, or Anderson Silva vs. Chael Sonnen.

There have been some rare cases of shows where a non-championship match is bigger than the championship fight on the same show. Some examples were Tito Ortiz vs. Ken Shamrock in 2006 being far bigger than Tim Sylvia vs. Andrei Arlovski for the heavyweight title. Chuck Liddell vs. Wanderlei Silva in 2007 was bigger than the St-Pierre vs. Matt Hughes welterweight title match the same night, although either could have been pushed as the main event. Brock Lesnar vs. Frank Mir I in 2008 was significantly bigger than Sylvia vs. Antonio Rodrigo Nogueira for the heavyweight title. Chuck Liddell vs Shogun Rua in 2009 was far bigger than the Anderson Silva vs. Thales Leites middleweight title fight that night. A non-title light heavyweight fight with Anderson Silva vs. Forrest Griffin in 2009 was a bigger fight than B.J. Penn vs. Kenny Florian for the lightweight title.

A look back at the biggest night in UFC history 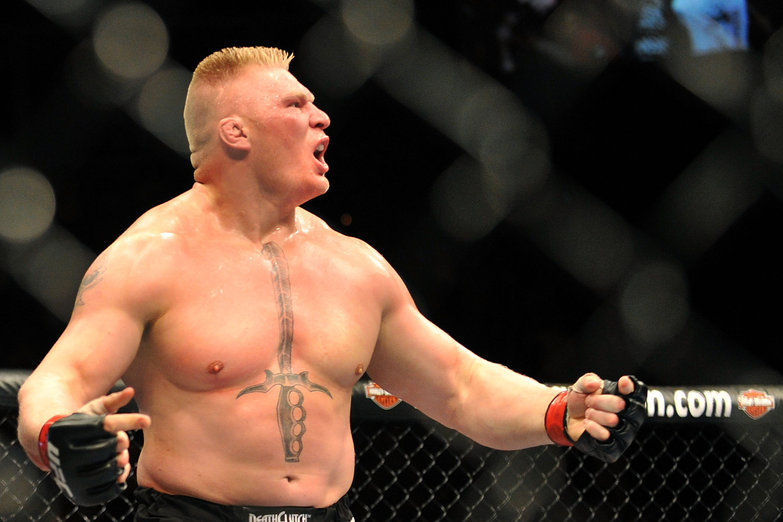 Five years ago, the UFC's interest level in the U.S. hit its highest point ever with UFC 100.

In all cases, the title fight went on last and in the main event spot. UFC didn't fool themselves in most of those cases. When the non-title match had more public appeal than the title fight, the preshow promotion focused more extensively on the non-title match. In most of those cases, there was no question in fans' eyes what the real main event was, even if it didn't go on last.

Really, there very much a question at UFC 178 as to what the real main event is. But the title fight, with Demetrious Johnson vs. Chris Cariaso for the flyweight title is not any part of the answer.

The show has no blockbuster fight, but it has a few solid contenders for the match people have the most interest in. Cerrone is a charismatic lightweight who is always not far from the title picture but has never gotten a shot at the UFC title, always falling short in the big one. Alvarez is a two-time Bellator lightweight champion who is one of the two best lightweights of the modern era who has never been under a Zuffa contract.

However, the biggest star on the show is Conor McGregor, a rising featherweight with world-class charisma. If McGregor could rise to championship level, he will likely be the biggest drawing card - with the exception of a peak B.J. Penn - under 170 pounds, in UFC history. That requires McGregor to be good enough to be in championship contention, a level he's completely untested at. This is a fight that will help answer that question.

Both fights would be solid No. 2 fights on any pay-per-view show, and either could headline a television card. Neither fight, at least today, is anywhere close to the caliber of pay-per-view main as the aforementioned non-title fights were at the time.

In looking at a marketability quotient, using U.S. Google search interest in the names over the past year, which, historically correlates extremely well to not just public interest but importantly, to eventual pay-per-view buys, UFC 178 is different from any show to date.

McGregor vs. Poirier and Alvarez vs. Cerrone both score 12s. Tim Kennedy vs. Yoel Romero is a 10. Cat Zingano vs. Amanda Nunes is a nine. Both Dominick Cruz vs. Takeya Mizugaki and Johnson vs. Cariaso score fives. It is unheard of in UFC history to have a television undercard fight (Cruz vs. Mizugaki right now is scheduled for the FS 1 prelims, not the pay-per-view), to have equal interest in the pay-per-view main event.

For a comparison, the T.J. Dillashaw vs. Renan Barao main event of UFC 177, which is not likely to do strong pay-per-view business, is a 21. Chris Weidman vs. Lyoto Machida, the last pay-per-view main event, and the most successful headline match this year, was a 99.  The UFC 168 double headliner saw Weidman vs. Anderson Silva score a 250 and Ronda Rousey vs. Miesha Tate score a 300. And that's why that show topped 1 million buys.

What does all this mean?

It means that if UFC builds the show around Johnson vs. Cariaso, they are minimizing the potential audience to a scary degree, and this show at best is going to struggle.

The reality is, almost nobody cares about this fight, and barring something unforeseen, nobody will, no matter how hard it's pushed. Johnson is super skilled, lightning fast, and pound-for-pound one of the best in the sport. But when he fought earlier this year in Vancouver against Ali Bagautinov, people were walking out during his fight, because, like it or not, Rory MacDonald vs. Tyron Woodley was the main event that night. Given that Vancouver rarely gets big shows and Las Vegas gets them all the time, the odds of this same thing happening if Johnson vs. Cariaso goes on  last is even larger.

And that show was the worst-performing pay-per-view of the last nine years.

This is not like any of the aforementioned shows, where even if it wasn't the true main event, the title fight went on last and there was no issue with that. And on those shows, maybe it was promoted equally to the real main event, or even less than equally. But this show is a different animal.

The title match isn't a distant No. 2. It is at best No. 5,and more likely No. 6, in terms of public interest. It has so little interest that you could make an argument that as far as business goes, the right move could be to put it as the main event on FS 1 and ignore it completely in the buildup.

Still, it's surely going on last and match order is not really that big of a deal. However, marketing the show is a huge deal.

In that arena, the keys should be to push McGregor as the star with Poirier as his "B" side, and Alvarez vs. Cerrone as the gun fight. If anything, the return of Cruz is the next most important thing, even though Mizugaki has no name as his opponent. Even Zingano, a potential next opponent for Ronda Rousey with a heartbreaking story, should be strongly built up. And Kennedy, who likes to talk and is coming off a win over Michael Bisping in a TV main event, is facing an incredible wrestler and freak athlete in Romero.

The show isn't going to draw big on pay-per-view given there is no pay-per-view quality main event. Live, the ticket sales are very strong, with more than 7,000 tickets sold to the public for $2 million, not including casino buys. But that's because the tickets were purchased to see Jon Jones vs. Daniel Cormier,and of the people who bought tickets right away, at this point the number asking for refunds is not that large.

So at best, the goal of the show is to focus on and try to build bigger names of those who can make a difference down the road. In that sense, McGregor, should he win, has superstar potential. The Alvarez vs. Cerrone winner could easily get the next lightweight title shot at the Anthony Pettis vs. Gilbert Melendez winner. The Nunes vs. Zingano winner is the best bet to face Rousey in the next women's bantamweight title fight, with only a Gina Carano signing likely getting in the way. Given Rousey's involvement, that's a high profile fight. Cruz, if he looks like the Cruz of old, would likely face either whoever the bantamweight champion is next, or face rival Urijah Faber, either of which will be bigger fights than anything in the flyweight division.

The winner of Johnson vs. Cariaso does what?  Maybe he faces John Lineker. It's a title match, but it would be best served on television or underneath another title fight, or on a show that has a real main event out there with it.