In the battle of who could return to form in the middleweight division between Cung Le and Michael Bisping in Macau, China, it'd be the British-born volume puncher in Bisping who managed to get the job done as he used his patented style of slowly chipping away at opposition to take a stoppage victory in the main event of UFC Fight Night 48.

The first round was a largely even affair and showcase of individual striking styles. Le used his rangey kicks and outside hooks to score to the head and body while Bisping was fleet of foot and more focused on hand combinations. By the second round, however, things turned a bit ugly, both figuratively and literally.

On what Le believed was a poke, but the replay showed to be a legitimate punch, Le's right eye was essentially closed as he squinted in pain. His left eye was soon damaged, too, leaving him with almost no ability to see. The ringside physician was called in to evaluate the cut, but decided Le could continue. The round was halted twice due to Le inadvertently groin kicking Bisping, but no points were taken away.

By the third frame, it became a more even round with Le landing hard kicks to the body and counter hooks and Bisping applying consitent pressure and slowly warming up with his patented hand combinations. 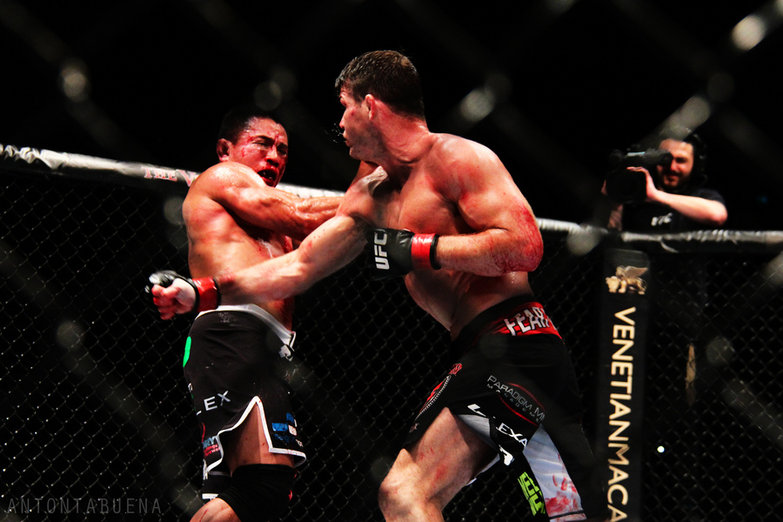 The fourth round, however, wasn't much of a round. Bisping unloaded on Le, backing him up with hand and foot combinations before securing the clinch close to the fence. A well-placed knee from Bisping to Le's face sent him falling backwards. Realizing the bout was seconds away from being stopped, Bisping pounced on his opponent. After a perfunctory shot or two, the referee had no choice but to stop the action. The TKO finish came officially at :57 of round 4.

"Did you like that fight?," Bisping asked the crowed when being interviewed post-fight by commentator Kenny Florian. "I took some time off. I had some problems. Came back, didn't go well. This is what I'm capable of and believe me, I'm capable of better. I've had the best camp ever. I want to be world champion. I know I have the tools, but you have to back it up. This is the start of backing it up.

"The first fifteen fights of my career, I stopped everybody in the first round. If you think I haven't got knockout power, you're a fool."

When asked for what he'd like to do next in his career, Bisping was unequivocal in calling out a rival.

"What do I want? I want the title," he said. "There's an idiot called Luke Rockhold who doesn't stop talking about me. I think he has the hots for me, to be honest. Luke Rockhold, you called me out. If you want to do it, let's dance. Here I am. I'm going to beat Luke Rockhold and then I'm taking the title. Make no mistake.

In the co-main event. top welterweights Tyron Woodley and Dong Hyun Kim looked to climb the rankings into the top five, but it wasn't to be for the Korean. 'Stun Gun' lasted a little more than a minute after being rocked early and clinched, the two separated. Woodley slowly backpedaled toward the fence, which prompted Kim to throw a spinning back fist. Woddley, though, timed it and landed a right hand that sent Kim collapsing to the canvas. Kim hung on for a brief moment and even attempted an upkick to keep Woodley off, but the American dove around his opponent's legs, thereby landing a series of blows that forced a referee stoppage.

Lipeng improves to 8-7-1 while O'Reily takes the first defeat of his career, dropping him to 5-1.

The main card was opened by the featherweight finals of the The Ultimate Fighter: China, a bout that was originally set to take place in March, but was delayed due to competitor injury. The bout, however, was a lackluster affair without much action as Ning Guangyou took a unanimous decision over Yang Jiangping, claiming 29-28 on all three judges' scorecards.

Guangyou was relatively more proactive on offense, pushing Yang back and scoring with takedowns in the first and second rounds. By the third, Yang's inside leg kicks took over, but it was too little, too late. Guangyou earned a unanimous decision victory with 29-28, 29-28, and 29-28 on all three judges' scorecards.