If this was a list ranking mixed martial arts' top pound-for-pound self-promoters, we'd likely talk about how Irish featherweight Conor McGregor has taken over the top spot in the wake of Chael Sonnen's retirement.

But rather, this is a compilation of the current top 10 featherweights in the sport, as determined by the SB Nation panel. And as of now, the bombastic McGregor doesn't yet make the cut.

McGregor finished Diego Brandao in the first round of their July 19 bout in Dublin, capping one of the most memorable UFC events in recent years.

The majority of pollsters, however, are taking a wait-and-see approach before ranking him.

McGregor placed 13th in this month's poll with two points, receiving 10th-place votes from both this reporter and my MMAFighting.com colleague, Ariel Helwani. McGregor went unranked on the other four ballots.

Speaking for my vote: The only fighter in the current top 10 for whom I didn't cast a vote was No. 9 Chan Sung Jung. As I see it, Jung has not won a fight in 27 months; has fought only once since; and there is no timetable set for his return. I'm as big a "Korean Zombie" admirer as anyone, but he's simply been too inactive to rank at the moment. Given the remaining options, I believe McGregor, at 3-0 in the UFC, is the best available choice among those not ranked.

Whether you agree or disagree, of course, McGregor has his opportunity to prove his worth beyond a shadow of a doubt on Sept. 27. That's when he meets No. 6 Dustin Poirier in the highly anticipated UFC 178.

As for the top of the poll, the faces are familiar. Jose Aldo and Chad Mendes, who were supposed to meet for the UFC featherweight title on Aug. 2 but will instead fight in October, are the unanimous top two picks in this month's poll. Cub Swanson, with four third-place votes, and Frankie Edgar, with four fourths, were locks for those respective positions.

And among other fighters of note, Dennis Bermudez has scrapped his way into contention and makes his debut at No. 8 after his finish of Clay Guida.

(Scoring: Fighters are given 10 points for a first-place vote, nine points for a second, etc., down to one point for 10th place. The results are then tallied up and presented here. Official SB Nation rankings policy: Fighters under commission suspension are ineligible to be ranked during the duration of their suspension or if they have licensing issues. Among fighters generally considered top-10 worthy at featherweight, this presently affects Dennis Siver, who is suspended by Nevada through Sept. 28 due to a post-fight test failure). 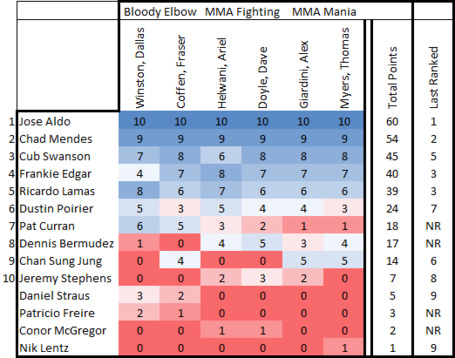 1. Jose Aldo (24-1, 60 points): With a win over Chad Mendes at UFC 179, Aldo would have his ninth successful WEC/UFC title defense, which would put him one short of Anderson Silva's Zuffa record.

2. Chad Mendes (16-1, 54 points): Mendes got no favors from the UFC in rescheduling the title fight, as it moves from his California home court back to the city where Aldo knocked him out the first time they met.

3. Cub Swanson (21-5, 45 points): Victory over a tough Jeremy Stephens ran his win streak to six and put him next in line for a title shot.

4. Frankie Edgar (17-4-1, 40 points): Edgar's ready for a fight of divisional consequence after the sad spectacle of his third bout with B.J. Penn.

5. Ricardo Lamas (14-3, 39 points): Bounced back from loss to Aldo with a win over Hacran Dias, his fifth in his past six fights.

6. Dustin Poirier (16-3, 24 points): Poirier, on a three-fight win streak, has faced higher-ranked competition than Conor McGregor. But UFC 178 will be by far his biggest spotlight.

7. Pat Curran (20-5, 18 points): Miracle finish over Daniel Straus returned Curran atop the Bellator featherweight division and put him back into the rankings.

9. Chan Sung Jung (13-4, 14 points): No timetable yet set for Jung, who injured his shoulder in a title challenge to Aldo last summer.

10. Jeremy Stephens (23-10, 7 points): Can't get too down on Stephens, who toughed it out and went the distance against Swanson on Jun. 28 despite a broken hand.