Nogueiras searching for new talent, from Rio to the Amazon rainforest

RIO DE JANEIRO -- The Ultimate Fighter tests new talents before bringing them to the Octagon, and MMA legends Antonio Rodrigo Nogueira and Antonio Rogerio Nogueira decided to do the same in the search for new prospects in Brazil.

The Nogueira brothers started their own gym in 2008, right after "Minotauro" won the UFC interim heavyweight title with a win over Tim Sylvia. Since then, the twin brothers have become huge attractions in Rio de Janeiro. Dozens of fighters have traveled to the city for an opportunity to train with the Nogueiras, and for some of them, it has paid off.

Six years later, Team Nogueira has 30 affiliate academies around the country –- and around the world, including San Diego and Abu Dhabi –- so they came up with an idea to start their own MMA promotion. They've done so with Face to Face and Team Nogueira MMA Circuit. Now, a new project is around the corner.

"One day a little boy came here to the gym asking to train with us. He was 12 years old, and he ran away from home in Recife and travelled 1,100 miles to get here in Rio," "Minotauro" told MMAFighting.com. "There’s no way we’d let him stay, and justice took 20 days to find his family because he declined to tell us his parents’ names. When he turned 18, he came back to the gym saying he wanted to train with us. That was crazy.

"It happens all the time, man. We have guys from all over the country coming to train with us, so we decided to do something about it."

Young prospects have to do some grappling and standup training to convince Joe Silva they deserve to be part of The Ultimate Fighter reality show, and that’s exactly what "Minotauro" does with the talent that shows up at his gym.

"We let them train jiu-jitsu, boxing and then spar. If they’re good, the coaches let me know and I’ll come watch another sparring session so we can decide if they stay or not," he said. "I’ll tell you what, there are some great guys showing up here. We’ll start a project called Team Nogueira Recruitment. Every Thursday, we’ll do a small event to test these guys. Two professional fights and three amateur bouts. Announcers, judges, everything, and we test them."

That’s how the Nogueira brothers met Francisco "de Assis" de Lima Maciel. His manager paid for his flight and he traveled from Coari, a small town in Amazonas, to Rio de Janeiro to fight at the third edition of Team Nogueira MMA Circuit in 2013. He submitted his opponent and impressed "Minotauro."

"I asked him ‘is there more like you back in Coari, my friend?’ and he started showing his project to me," Nogueira recalls. "He had like 20 young kids, really talented kids, so we’re bringing the whole city to Rio [laughs].

"The city is so far away from everything that they need one day and a half on a boat to get to Manaus, and then they fly to Rio. There’s no structure at all there, but these kids are monsters."

"I did a test, won a fight and they liked me," de Assis said. "A lot of fighters want an opportunity like this, so I train hard and do my best to help my family in Coari. I won the Coliseu EF title in May and bought a piece of land in for my wife, and I’m building my house now.

"I’ve always admired them for fighting in the UFC, and now I have them close to me. ‘Minotauro’, Anderson Silva, ‘Minotouro’," he added. "They all talk to me, give me advice and help." 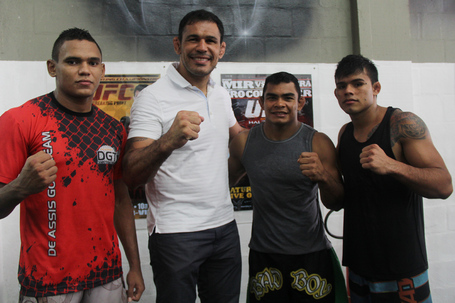 Nogueira expects de Assis (9-2-1) to sign with an "international promotion" later this year, and he sees a bright future for de Assis’ protégés, Herdeson "Capoeira" Batista (7-0) and Rodrigo Praia (5-1). The young talents also moved to Rio for a chance at Team Nogueira’s recruitment events, and they want more.

"I came to Rio to keep training, get more wins and be the best fighter in my weight class," Batista said. "I have this goal, and I want to give my family a better life. I fought here and they liked my fight, so they gave me a contract and now I’m a Team Nogueira fighter."

Batista feels ready enough to be in the big stage and welcomes a fight in the UFC already, but the 19-year-old Praia takes things step by step.

"I still have to learn a bit more. Everybody does," he said. "I have to evolve, learn new techniques, to get there and do a good job. I’m on the right way to be in the UFC one day. Team Nogueira gives me the best structure in the world, so I believe I will be in the UFC next year of in 2016."

"Minotauro" owns a few apartments close to the gym, where these young prospects live. It’s his reality show and their TUF house, but the next step could be anywhere.

"They all want to sign with an international promotion, so that’s our goal," Nogueira said. "We give them training structure and everything, and we want them fighting their best to get them fighting overseas. We need new talent, we need new idols, and that’s Team Nogueira’s plans."