The last chapter of Jason Day's athletic career unexpectedly slammed shut on August 4, 2011. An ex-UFC middleweight who once battered Alan Belcher in his Octagon debut, the previous year had not been kind to Day. Just two months prior, he lost his third fight in as many tries, succumbing to a two-minute mugging at the hands of Francis Carmont at some small show in Ontario, Canada. His head wasn't in that one, he'd admit years later, but at least on this bright Vancouver afternoon, he was back home, the air was crisp, and the road was all that mattered.

Day pedaled his Bianchi three-speed towards his cousin's house, while miles away a newly pregnant Zichau Wang finished up her prenatal massage and climbed into her Range Rover. The two's paths would collide at Oak Street and 10th Avenue. Neither would forget the moment.

Day urged his bike eastbound as Wang rolled up to the intersection. The light turned yellow and Wang gunned it to try get through, oblivious to the professional fighter with the right of way.

Day would later recount in court that everything from that point on felt like slow-motion.

Wang's Range Rover collided into the left side of Day's body, metal and plastic and rubber grinding into flesh and bone. Day careened over the top of the vehicle, then smashed hard onto the concrete, crushing his right knee and ankle, while Wang barreled to a screeching stop. The entire scene took only a few seconds.

When Day came to, numb and disorientated, the seat of his three-speed remained fixed between his legs, while the rest of the commuter bike settled in a mangled heap across the intersection next to his sandals. He was understandably terrified.

A little over a year later, a man who vaguely resembled the fighter who had once stood so proud inside the Octagon gingerly eased himself against the outer wall of a bar in Calgary, watching some junkie strung out on bath salts molest a tree. It was past midnight, nearly 3 a.m., and Day's life had fallen apart.

In the initial weeks after the accident, Jason Day was thought to be lucky. He implausibly limped away without a single broken bone, requiring only a cane to navigate the soft tissue damage in both of his knees and ankles. At the time he didn't think too much of it, and within two months he was back in the gym. But no matter how hard he tried, things weren't the same. He couldn't withstand any impact on his ankles. Kicking was a no-go and any side-to-side mobility drills were only trials in frustration.

He began attending physical therapy, but quickly the therapists referred him to a specialist. That road led to a cold declaration of how there wasn't much to be done without surgery, but surgery wasn't an option either; once the swelling subsided, doctors realized there was only a five-percent chance of repairing the scarring and tearing in the cartilage of his left knee and ankle joints, and a much larger chance of making the damage worse. Day held out hope, doctor after doctor, MRI after MRI, but ultimately each avenue ended in exasperation. Canadian insurance giant ICBC draped his case in red tape, and slowly Day drifted to the background, stuck in limbo, a fighter-no-more clawing for some semblance of an answer. 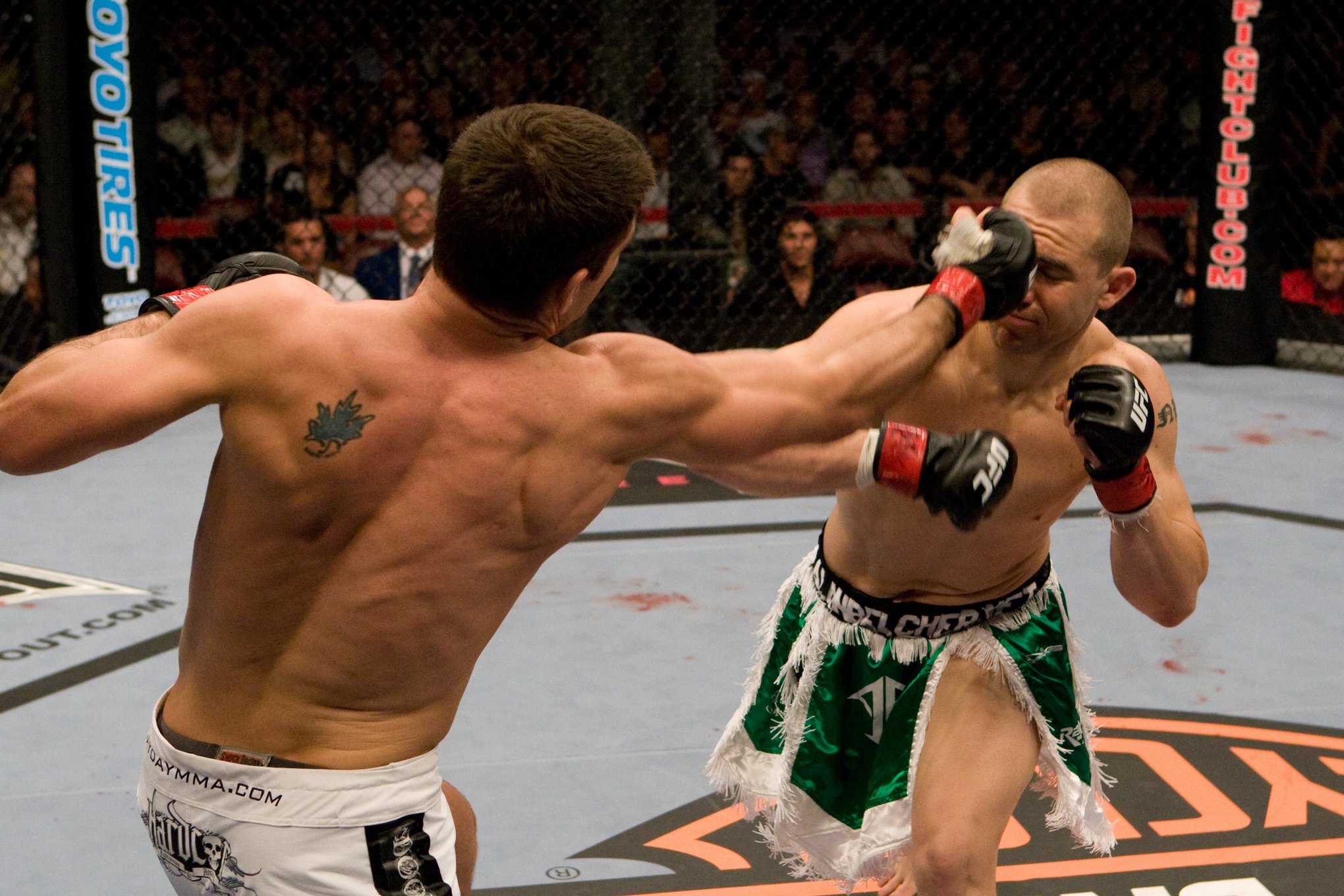 Finally, he left it all.

MMA was too painful, Day says now. The gym was no longer a place of joy and solace, but one crowded with resentment.

So he discarded everything, moved away to Calgary and got a job managing that local tavern. For a year, he fooled even himself. He abandoned anything to do with the sport that raised him, shying away from blockbuster UFC events when they popped up on the big screen. But it was all an act. His ankles still ached, and he fell into a deep depression.

Until the night everything became too much.

"I was standing outside of the bar at like 3 a.m., and there was a guy hugging a tree, convulsing," he says. "It was at the time when bath salts were a huge thing. It was ugly. I thought he was going to die. And there was a gang squad of police officers out in full gear, six of them standing there, and then another Asian gang in the street. And then we had another gang inside, they were held up in there.

"And that was it. It was like, what am I doing here? F--k man, I don't need to be around this. It was one of those moments of clarity, like you have to pull your head out of your ass."

He moved back to Vancouver, took up coaching again, and began to pick up the pieces of his life. For two more years, he slowly reintegrated himself into the sport that became his first love. It wasn't the idyllic lifestyle he'd daydreamed of back when those four-ounce gloves crashed against Belcher's chin and the future looked so bright, but it was respectable nonetheless. And hey, at least it paid the bills.

So how much is a dream worth? It's a bizarre question to ask, but for Jason Day, a dream cut short ended up being worth six figures.

Earlier this month, a jury composed of eight relative strangers to MMA ruled that Zhang was 90-percent at fault for the accident that forever changed the course of Day's life. The judgment awarded the former fighter $375,000 in damages due to any potential lost earnings and emotional suffering that came with a premature end to his athletic career, from which he was granted $340,000 as the collision was ruled 10-percent his fault.

In all, Day's case took nearly three years to reach the courtrooms, most of which was spent with the ICBC tying up the process in claim disputes and pointless litigation in the hopes of waiting Day out. Their ploy may have worked, too, if not for the 2013 case that saw Nigerian-born cruiserweight boxing prospect Jegbefumere Albert awarded $1 million in potential earning losses following the 2008 car crash that ended his own career.

Former police officer John Cameron was the lawyer who represented Albert in that case, and once Day heard the verdict, he jumped to secure Cameron's services. A few weeks before Day's trial, with the anniversary approaching of the day Zhang plowed her Range Rover into the fighter on Oak Street and 10th Avenue, the ICBC offered Day a $25,000 settlement. It was the first scrap of contrition from the insurance giant.

The following week, the ICBC upped that offer to $50,000. Two days later, it vaulted to $100,000. The desperation was palpable and long-deserved. But Day wanted justice.

"The day after that, they called to negotiate," he says. "It was too late. We were going to trial. I wanted to be able to at least tell my story, talk to a jury and say this is what happened to me and have them decide what's right. Out here in B.C., the ICBC is a province-wide insurance corporation. They're the giant, and they're trying to tell me that my career was worth this much?

The trial was surprisingly emotional. A litany of former coaches and training partners testified to Day's ability as a fighter. Patrick Cote gushed over video from Montreal, while World Series of Fighting Canada president Darren Owen spoke glowingly on Day's behalf. The jury even got a chance to watch Day's fight against Belcher, and the ex-UFC fighter couldn't help but get a little choked up.

"It's a completely bizarre thing," Day says. "You're telling me what my dream was worth. I lost a career. Your ego plays into it. The bigger that number was, the more reassurance or more reinforcement it was of how good my career was. And it's silly. It's so silly to put that on a group of eight jurors who don't really know anything about MMA. All they're getting is the short little snapshots of what it's all about. It's very strange."

Ultimately, the decision offered a sense of closure for Day, in addition to some much-needed financial stability, at least in the short term.

At 35 years old, Day has now turned his sights towards a career in acting and stunt work, and so far it seems to be going well. He recently served as a stunt double for Dean Cain of Superman fame... yet, he still finds it hard to shake the man he once was.

The three-fight losing streak that ended Day's career stings to no end. Blame it on that old competitive fire if you must, but against all reason, he can't help wondering what would have happened had he been given another chance.

"I'd like to say I've been able to reconcile it. But I mean, in my heart, for some reason I still believe I'll fight. I can't let go. I feel that, I don't know... everything says I can't. To try to make a comeback, even if I could, if I could go in and maybe there's some stem cell procedure, 35 is a tough age to come back to. But I get that feeling. It's in my blood. It's hard for me to discard and say, well that chapter is over. I went to the UFC here in Vancouver, and it was tough.

"To be honest, I'm very lucky. I get around okay. My ankles ache in the morning. If I sit too long they start to ache, any uneven surface bothers me. But I'm in the gym, I'm training. I don't do any pad stuff, I just do a lot of mobility and balance. I get to do a lot of jiu-jitsu. I tried a little sparring. That hurt, the side-to-side movement really bothers me. But I'm very fortunate that I came out of there as good as I did health-wise, even if there's a lot of things I can't do that I used to love."

Day pauses, then sighs at the memories.

"In a way, I hope it sets a precedent for any athlete," he finishes. "It's heart-breaking to get your dream and that ability taken away from you. So if there's any other guys out there in my situation, there's hope for you."