Mark Bocek on the number of PED users in MMA: '90 percent sounds about right'

This past week, when 32-year old Mark Bocek decided to announce his retirement from the UFC, it seemed like odd timing. Bocek is coming off of an April victory against Mike De La Torre, and had won three of four bouts in the lightweight division. To take the unusual step of retiring while still viable in the cage meant there might be more to the story.

Bocek has made more headlines in the first week of his retirement than perhaps he did in any one of his 13 UFC fights by airing his grievances with the sport’s PEDs problem. Bocek told UFC Tonight that he was tired of competing against guys who were using performance enhancing drugs, and was ready to move onto the next chapter of his life -- coaching, and perhaps even auto/go-card racing.

But the PEDs weren’t the only reason that the Canadian lightweight walked away. Bocek appeared on the Monday edition of The MMA Hour and listed a variety of reasons as to why he decided to hang up the four-ounce gloves, and the most basic one was a general lack of motivation.

"I kind of feel like [it began to happen], maybe leading up to that
[Raphael] Dos Anjos fight, when I was starting to lose a little bit of motivation," he told Ariel Helwani. "Any MMA fighter will tell you, if you lose motivation and you’re still trying to compete just to get another pay check -- especially at the UFC level -- it’s not a very intelligent decision, and you’re probably going to lose.

"But it’s not just that. Losing motivation was one thing. Weight cutting, there’s another thing. Other than that, to be honest, and something that I never really touched upon as much, brain damage. I don’t want to get brain damage. You’re going to need your brain for a long time."

Time to take a stand on positive PED tests 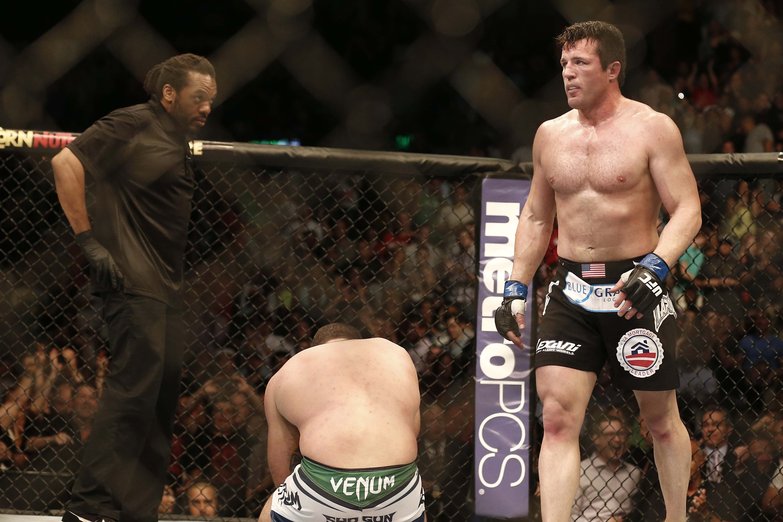 It's time for both the UFC and athletic commissions to take a stand that will garner the trust of the legitimately clean fighters.

Bocek said that he has experience a few small symptoms of damage, including light-headedness. The fear of ending up with long-term damage to his brain became another catalyst to get out of fighting. He said it’s not just brawlers who suffer from those effects, but anybody who sustains cumulative damage throughout a course of time in the gym and in the cage.

Bocek cited long-time welterweight champion Georges St-Pierre, who has gone on record of having memory loss from time-to-time, as an example.

"He’s one of the best, so that can obviously and clearly happen to anybody," he said. "And it’s a concern for me as well."

But the rampant presence of PEDs in the fight game contributed to Bocek’s decision to retire.

"But this is not just an MMA problem, this is a problem I’ve seen in my career for 17 years. Let’s forget MMA for a second and look at jiu-jitsu. What do you think happens at a high level in jiu-jitsu when testing is extremely lax?"

Bocek said that the incentives to do PEDs when testing in competition is as relaxed as it is becomes almost a no brainer. At least for those who have the means to not only take them, but to cover their tracks.

"What it comes down to is money, and fighters like me, who don’t have massive bank accounts, so it just becomes something that’s impossible to compete with any longer," he said. "So, I want to end this on a victory, and have a good memory of the sport rather than leave on a loss and being sour and thinking, ‘why did I take more fight, like Matt Hughes, Chuck Liddell, Randy Couture.’"

Asked when he noticed PEDs becoming a problem, Bocek said he’d recognize a difference in training partners in the gym and elsewhere.

"We all lift weights, and we know what weight-lifting does," he said. "Weight-lifting doesn’t turn one into a superhuman freak that doesn’t get tired. It doesn’t really work like that. [PEDs are] not a magic bullet, or anything. You still have to do the hard work. It’s not like you can give this to anyone and they’ll become the world champion. But when you have someone who is highly evolved, and highly trained, and highly motivated, and highly focused with training and work ethic and diet and big money on the line…of course it’s going to be an issue, unfortunately."

When brought up that one fighter estimated that 90 percent of MMA competitors are taking PEDs of one form or another, Bocek surprisingly didn’t balk.

"We can only speculate, we can’t put a number on it, but maybe someone like me can go further into this area than your average Joe," he said. "Maybe 90% sounds about right. You could say that, yeah."

"Let’s take the PEDs out for a second, let’s even forget about that as rampant as they are," he said. "With certain fights and certain fighters and certain people, you don’t even see who the best fighter is. Because you know if you take someone down, you’re probably going to end up on the undercard in your next fight, because they hate grappling. The UFC doesn’t even like grappling, because the uneducated fans don’t like grappling. So you start doing things like that, you end up on the undercard.

"If you stand in the middle and abandon strategy and just put on a slugfest and see who stays standing until the end, that’s what people want. That’s what they want to see, but now the chances of you winning the fight are much lower."

Bocek also spoke of other problems with the UFC and MMA that went into his decision to quit while he was ahead. He cited the sheer volume of fight cards as another misdirection -- "they are running three or four shows a month, I don’t even know what’s what anymore," he said -- as well as the spotlight given to women’s MMA even though there’s what he considers a dearth of experienced competitors.

Asked if the UFC was doing enough to stop the PED problem in the sport, Bocek said no.

"Let me put it this way, maybe if I’m the UFC, maybe I don’t want all this WADA and VADA and voluntary testing, right?" he said. "Because, if we start doing this type of testing, results come out before events come out, so we don’t really cash in on your PPV money. But if we deal with this lax commission testing, the results come out after PPV, so it’s a little more convenient."

Bocek insinuated he wouldn’t come back to fighting even if the sport were cleaned up, saying that he just didn’t want to absorb any more punishment.

"I’ll always be involved in martial arts in one way or another," he said. "Like jiu-jitsu and wrestling, I love that stuff, and I love striking too, don’t get me wrong. I just don’t want to get hit in the head anymore."