Two of WWE's leading officials, Paul "HHH" Levesque and wife Stephanie McMahon, promoted their product as superior to legitimate fighting sports claiming they guarantee you good matches and a good show, and have superior replay value.

Two of World Wrestling Entertainment's major executives and part of the company's ruling family, Paul "HHH" Levesque and wife Stephanie McMahon, spoke this past week about the Ultimate Fighting Championship at a fireside chat during the Needham Interconnect Conference in New York.

The discussion came when someone in the audience asked how the UFC had impacted the WWE's business.

Since 2005, the WWE and the UFC have had a unique dynamic. The two are, or at least were, competitors in pay-per-view, and have a crossover fan base. But circumstances dictate it being smart for both sides to claim that's not the case.

For the WWE, which always triumphs being No. 1 in its genre, admitting competition would have opened up comparisons in pay-per-view, where UFC started beating WWE's numbers in North America badly, particularly from 2006 to 2010. During some of that period, UFC's top pay-per-view draw was Brock Lesnar, whose star power was created from his 2002 to 2004 run as one of WWE's biggest names. Lesnar bringing in new fans would seem only logical to be predominately pro wrestling fans.

For the UFC, there are a number of more obvious reasons why it wouldn't want to be compared with WWE. The UFC exists based on being legitimate. The WWE is entertainment, not competitive sport, even though many of its performers are great athletes. But comparisons may cause the UFC to have the perception of not being legitimate sport, a tag it has had to fight for since the media perception from the so-called "human cockfight" era in the 90s.

Paul Heyman on
The MMA Hour 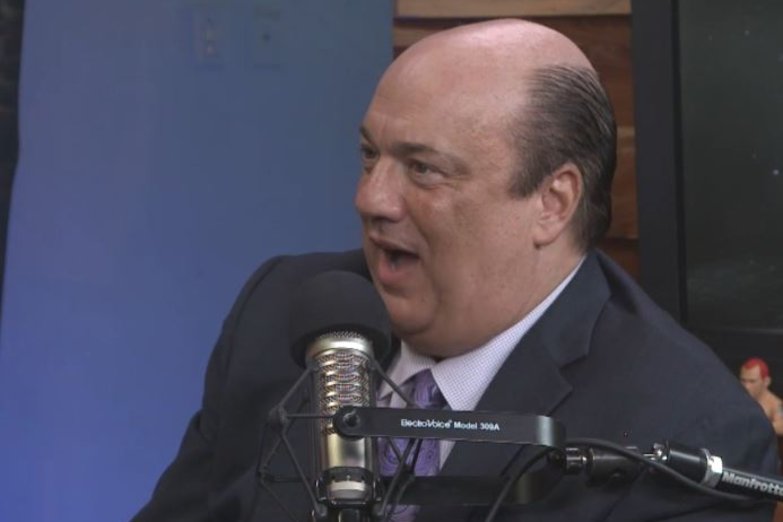 Yet the crossover, of both fans and performers at times has been huge. When the UFC went from being a money-losing business with a cult audience to being, at the time, the fastest-growing sport in North America in 2005. It did so based on attracting pro wrestling fans who watched Raw on Monday nights, and didn't change the channel when Ultimate Fighter or other UFC programming on Spike TV aired right after.

A little known fact is that Spike would not have put the UFC on its that time slot, the most beneficial to its growth, had Vince McMahon, the Chairman and CEO of WWE, given his okay. Because of that, Dana White, usually not known for holding back his emotions, will rarely if ever say anything negative about McMahon, even if McMahon or members of his family knock White's product. Plus, at its core, White has to admire someone who has successfully run a similar business for 32 years.

Whether the crossover is as significant today, when each genre seems to more have a niche audience and less casual audience than years ago, is a different question. But following pay-per-view patterns, until a few years ago, the WWE Sunday events usually took a significant hit if they came the day after a Saturday UFC show.

Vince McMahon has even acknowledged that, but the claim is that on a UFC week, the cable companies would put on more UFC commercials and thus WWE would get less, and that's the reason numbers declined, not that there is audience crossover.

There were also examples in markets where the UFC would run a major show on a Saturday and the WWE ran the same arena two nights late for Raw, its biggest event of the week. Numbers for the Monday show were often significantly down from usual.

Levesque, the Executive Vice President of Talent, Live Events and Creative, and one of pro wrestling's biggest stars of the past two decades, gave a long answer when asked about the comparisons. In reality, they are in some ways akin to comparing the NBA to the Harlem Globetrotters, except, and this was the case in the 50s with basketball, if the Globetrotters were still every bit as popular, and in many cases, more popular than the real version of what they do.

"They aren't really a competitor to us and I explain this to our talent in this way in the Performance Center and every time I say it people will say to me, oh, that made it very clear to me.  People like UFC.  They like boxing. But it's completely different from what we are. We are like the movie Rocky. We're a story. We're a great story that just happens to take place sometimes in the wrestling ring.

"So if you think about us less as Floyd Mayweather in a boxing match, which you'll watch one time and on pay-per-view, and then once that fight is over, it's kind of done, you know. And you're really not going to go back and watch it a bunch of times unless you're a connoisseur of boxing science. You're gonna watch it one time. But Rocky the movie you will watch over and over and over and over again.

"It's the story. It's the characters. Boxing is irrelevant to the movie, really. It's a triumph story. It's a love story. It's all those things and that's what we do. We create characters that you gravitate towards, thus you connect with, that you passionately engage with, you believe in on a visceral level, whether you hate them or love them.

"But our product is evergreen, because it's the characters and the stories that you engage in. That's what makes a passionate fan of the WWE. And it's lifelong, because even if you move away from it, even if you become a lapsed fan, you get out of college, you don't have a lot of free time anymore, you get a job, you have kids, you do all those things. And now all of a sudden, your kids start to watch."

Of course, there is an irony lost here. In reality, television stations, whether it be Spike, Versus, FS 1 or FS 2, replay old UFC and Pride matches to death. There are classic sports airing on television on a number of platforms. While WWE does have a streaming service, it has never been able to get its old footage broadcast on any kind of a regular basis on U.S. television. If anything, television of UFC, or other sports, from the past, is significantly greater than that of pro wrestling.

In addition, for those who have UFC Fight Pass, a similar service to the WWE Network, matches like Jon Jones vs. Alexander Gustafsson, and the entire UFC 168 show, are viewed in shockingly high numbers.

Regarding the question of UFC fights not having replay value, a UFC official laughed and said no comment.

Stephanie McMahon, the daughter of Vince McMahon, who is both the WWE's Chief Brand Officer, spent more than a decade working in the creative department and is also a television performer, followed up.

"In addition to that, with UFC, you can pay money to watch a pay-per-view and it can be a terrible fight, right? The guy you were really rooting for that UFC has been building as a star gets knocked right off and suddenly that person doesn't really matter anymore. And all that investment is lost. You never had that with WWE. We strategically build all of our superstars and characters, and we know when they are going to win and we know when they are going to lose. Uh, we do. And we build characters and make these megastars. It's all very intentional. And you're guaranteed to get your money's worth. It might not necessarily be the outcome you want, but you're guaranteed to have a great match, to have a great pay-per-view, and you're guaranteed to be entertained."

The truth is there are no guarantees. At times there will be bad UFC pay-per-views and main events that don't deliver. The same goes for the WWE. The WWE has more control and has the ability to keep stars on top longer by manipulating outcomes, but that only works when they pick the right stars, an inexact science. They actually have far more ability to control the star making process.


And while the WWE has made more stars with name value over the past two years than the UFC, The WWE hasn't been able to make a new star with the drawing power or as in demand as Ronda Rousey.

But it's not as easy as it sounds. The WWE has failed to make a new star at the level of Steve Austin and Dwayne "The Rock" Johnson in more than a decade. And while the WWE has made more stars with name value over the past two years than the UFC, The WWE hasn't been able to make a new star with the drawing power or as in demand as Ronda Rousey.

But over the past nine years, when both have been around at the same time with similar television penetration, there are general rules.

The WWE brand is far stronger at delivering television ratings, and in particular, reaching people over the age of 55 and under the age of 15, which the UFC doesn't hit strongly. But the UFC does a far better job of turning their television viewers into paying customers, either for live events or pay-per-view shows.

There are exceptions. No WWE event in the last ten years has had more TV viewers than the Cain Velasquez vs. Junior Dos Santos match on FOX. Only the biggest UFC fights can top some of the WrestleMania numbers on pay-per-view. WWE can't match UFC's live event merchandise sales. UFC can't match WWE's Internet merchandise sales. The WWE Network has more subscribers than the UFC Fight Pass, but UFC is ahead of the game because they didn't destroy their pay-per-view numbers in he process.