Anderson Silva wants to add more images to his highlight videos when he steps inside the Octagon against Nick Diaz at UFC 183.

Back in action after a gruesome injury suffered in December, "The Spider" returns to the Octagon on Jan. 31 in Las Vegas in a middleweight bout against the former Strikeforce welterweight champion, and he anticipates a stand-up war against the Stockton superstar.

"It’s a good fight for the fans and for me," Silva said in a media call on Friday. "We both haven’t fought for a while and I’m coming off an injury. Nick likes to fight standing and moves forward. Everybody knows he has an excellent boxing and will do the standup fight that everybody wants to see."

Silva never expected to face Diaz inside the Octagon and doesn’t know if the welterweight veteran plans to stand against him on Jan. 31, but hopes for it. 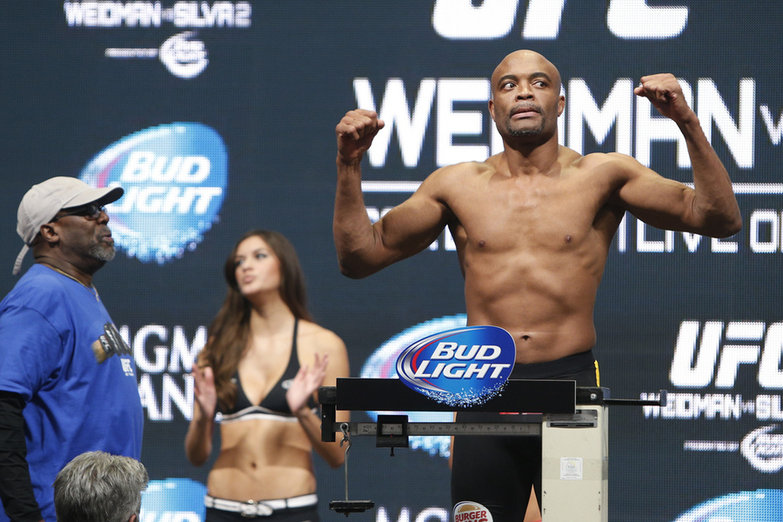 On this week's episode the panel talks about Anderson Silva vs. Nick Diaz, Eddie Alvarez's future, Jon Jones vs. Daniel Cormier, and more.

Doctors for the likely future UFC Hall of Famer inserted a titanium rod in his left leg after his rematch with Chris Weidman at UFC 168 to help with the recovery process. As it stands, he’s not at his best yet.

"It’s 95 percent," Silva said of his leg. "It’s obviously not like it used to be, but it’s getting better. I’m kicking, but I can’t kick too hard. I will do it on fight night."

He doesn’t plan to remove the titanium rod in the future because "it doesn’t bother" him. The leg break was a "work accident" according to the former UFC champion, and it won’t stop him of fulfilling his current UFC deal.

"I have seven fights left in my contract, and I will be able to do all seven because I like to fight," he said. "I obviously fight at 185 pounds, so if I earn another chance to fight for the title I would do it, but it’s not in my plans right now. My plan is to fight and get some confidence.

"I have watched the recent fights, the new great talents. Weidman showed the great champion that he is. We also have ‘Jacare’ (Souza), Vitor (Belfort), who is a great opponent for Weidman. We have many athletes coming.

"I’ve been beaten many times, so I’m not worried about what Weidman has done lately, or Lyoto. Every fighter searches for what they want, and I’m going after my goals. My fights with Weidman are in the past. They would be in the past even if I had defeated him. My focus is my fight with Nick Diaz, so I can do my comeback in the best way possible for me and for my fans."

Taunting and provoking are things Silva used to do in his fights, and Diaz is one of the masters at this area. But don’t expect a trash talk war between them before UFC 183.

"I’m thinking about doing my job like I always did," the Brazilian said. "I can’t talk about Nick as a person because I don’t know him. I had a few opportunities to be with him and talk to him, but he never disrespected me and I hope he doesn’t disrespect me because he has no reason to. I respect what he has done as an athlete and I hope he respect what I’ve done. Let’s do a great fight for the fans."

Hundreds of thousands of fans might be waiting for Silva’s return to the Octagon in 2015, but you can take off that list Silva’s wife and kids.

"My family didn’t want me to get back, but they understand my reasons and respect what I feel and what I want to do," he said. "If it was for them, I would never be coming back. No family wants to see you go to a war, especially my family after the accident that I had."

"I fight because that’s what I love to do," he continued. "I never fought because of a title or something like that. I like this sport, I love to do this. When I first started I didn’t have any of this. What I’m feeling right now is the will to do what I always did and test myself one more time.

"It’s time to get back and fight as I always did, train and do what I love."