UFC 175 and The Ultimate Fighter 19 Finale had a lot to offer. There were two title fights, both spectacular in their own right. Other fighters like Justin Scoggins and Dustin Ortiz also made a name for themselves. Crowds both nights seemed to be genuinely enthusiastic.

There were problems, too. Judging was sketchy a number of times, a legend was forcibly mauled into retirement, and a fighter had a health scare backstage.

It's time to separate the winners from the losers, the best from the worst and the signal from the noise from this past UFC weekend.

Best Moment of the Weekend: Chris Weidman vs. Lyoto Machida

Seriously, how refreshing was that main event? I won't hold it up to be the best fight ever or even the best middleweight title fight of all time, but certainly it's a contender for Fight of the Year. And even if not that, it had the essential ingredients of everything that makes MMA surpassingly fun: two elite, capable fighters in bouts of consequence. Fights at this level don't even look like the rest of what the sport can offer because of the stakes and talents involved. They certainly don't feel the same way. The unfortunate reality is when even all the aforementioned elements that go into top-rank prizefighting are there, you don't necessary get an aesthetically or athletically pleasing outcome. We did here, however, and how revitalizing it was to see.

Worst Moment of the Weekend: Frankie Edgar vs. B.J. Penn

That was godawful to watch. I hope I never have to bear witness to another beloved MMA pioneer beaten in such an hollow way. Strangely, the entire exercise felt pointless, but that appeared to be Penn's point. He needed to be crushed so thoroughly as to leave positively zero doubt anything else was possible for him. Well, mission accomplished. Penn made featherweight, which is itself a noteworthy achievement, but between that and steady passage of time, the once great champion looked feeble and helpless. Worse, he looked out of touch. His game plan both standing and on the ground seemed at best inadequate and at worst a boon to Edgar. I'm relieved Penn's now retiring and while a different circumstance entirely, it reminded me GSP need not come back for any kind of extended stay in the cage. 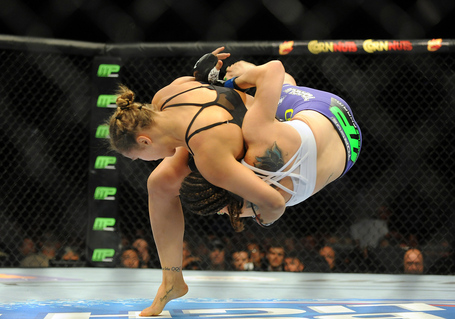 Most Underrated Fight of the Weekend: Justin Scoggins vs. Dustin Ortiz

These two are still developing talents, so they fail the test I mentioned when praised Weidman vs. Machida, but they pass just about every other. This was a competitive bout, fought tooth and nail, that featured a near submission, savy guard passing, expertly-timed takedowns, cage and mat awareness, reversals and myriad other techniques expertly applied in heated, crucial moments. These two never gave each other an inch and fought with what appeared to be indefatigable gas tanks until the very final bell. I thought Scoggins edged it out, but I can't complain in contests this close. Besides, the loss will help him reshape how he competes and only make the promising talent that formidable. For those in the know, this should also elevate the badly underrated Ortiz, a fighter whose accomplishments thus far outweigh the praise given to them.

Judging is a difficult, but not impossible task. I can forgive the margins, but not the full strokes. How on earth a rational person who claims to understand combat sports can award Sarah Moras a 30-27 score will remain forever inexplicable to me. I gather that some don't like the idea of positional control matter, but heads up: it matters. It counts as effective grappling because without positional control, the amount of submissions available shrink dramatically. There seems to be some false notion that effective grappling is simply grappling with heavy punches and a fight-ending submission. Certainly that would qualify as effective grappling, but it's not the sum total.

Detractors are quick to say, 'It's a fight, not a wrestling or BJJ match!'. Actually, not quite. Stating 'it's a fight' is, for starters, just an incoherent statement. You're not defining anything, just appealing to JUST BLEED sensibilities. Controlling position isn't code for stalling. It means putting your opponent in a vulnerable position while they are unable to do anything about it for an extended time. You're rewarding it because those are the conditions by which finishes and other forms of meaningful offense become more available. You're rewarding it because you're uniquely creating an environment where one fighter is at a constant disadvantage. Sorry, gang, whether you like it or not, positional control matters. It's not more important than all other things a fighter could potentially do, but it's not negligible either.

The UFC is right that their sport is mobile. It's true that large swathes of the world's various populations have some form of a combative sport tradition. Many in far reaches will or are already becoming fight fans. But the key to monetizing the sport through developing fan bases abroad is having countrymen to watch do the activity. As we saw with Puig and Tuerxun, that's easier said that done. Puig looked like he didn't even belong in the Octagon, easily getting waxed by a so-so Martins. Tuerxun fought better against a decent Issa, although it's not clear either can go very far in the UFC's bantamweight division. For as much as people in China or Mexico might clamor for UFC, the real work isn't staging an event in those countries. The key is developing the talent, something that requires time even when fast tracked with the UFC's involvement.

I don't know what happened to Struve medically other than what was reported or what I read. I just mean to say I'm no medical expert and that it appears he's OK. I certainly hope so. I'm glad his bout was cancelled given what happened backstage, but saddened by the idea of how frightening it must be for Struve to lack control here. So much of a fighter's life is built around routine, order and steady progress. There are setbacks, of course, the path is always linear and almost exclusively one framed as a fighter's choice to do or not do. With Struve, he's helpless to his own biology. Medical science seems to have offered solutions and I hope they work, but so far, Struve still hasn't turned them into proof of concept answers.

They say he'll return, as healthy and safely as his peers. I hope that's true, but am willing to wait until it's as certain as they can be. Nothing would make any of us happier than seeing Struve return to action, but nothing about it needs to be expedited in the name of anything else.