LAS VEGAS – "That was harder than I remembered," Daniel Cormier said, wiping away his sweat just moments after taking off his wrestling shoes for the last time. Cormier wrestled against three-time All American Chris Pendleton at the UFC Fan Expo on Saturday.

And it was a fond farewell to the sport that he excelled in through his college days at Oklahoma State and into the Olympics. After getting his hand raised with a 12-5 victory, he left his shoes on the mat. It was a gesture of goodbye.

"I didn’t get to wrestle in the Olympics, I didn’t get to do my last match, so I wanted to finish my career on mat, rather than in the hospital," he told MMA Fighting right afterwards. "I wanted to end it on the mat."

Cormier is the No. 1 contender in the UFC’s light heavyweight division, and next week will undergo surgery to fix his LCL in his knee. He will await the winner of Alexander Gustafsson-Jon Jones II, which happens in September at UFC 178.

But before he undergoes the knife, he wanted to bring closure to his wrestling career. The last time he competed was in 2008, so when he slipped the singlet straps over his shoulders, there was a surge of pressure on him to perform.

The crowd large that assembled, which included Tito Ortiz, Luke Rockhold and Ben Askren, cheered as Cormier gained control in the first period.

"Once I got up 6-3 I thought I was pretty comfortable," he said. "I’m usually harder to take down than that, but I’m not as good as I used to be, I’ll tell you that much."

After he got his hand raised, as swarm of children rushed the mat to congratulate him. He left his shoes in the middle of the mat. 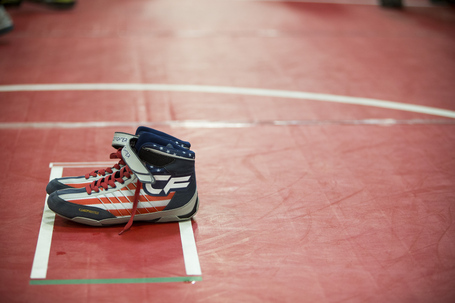 "It was a good finish," he said. "Now that I’m in the UFC and fighting in the UFC, and to do it at the Fan Expo, it means a lot. I guess it’s a symbol of completely finishing that chapter and moving onto the next chapter in my life. I can feel it now already there was something back with wrestling that I needed to get rid of, and now I can move on from it."

"My next fight, the next time I get my hand raised, it will be in the cage against Jon Jones."