UFC Fight Night 46 had a lot to offer. The Irish fans were something to behold, the Irish fighters themselves put on a hell of a show and leading man Conor McGregor did everything he promised to do.

Yet, not everything about Saturday's show was wonderful. The amount of UFC ads become intolerable and the over reaction to the level of talent on display was almost comical.

We have a few traffic tools editors at this site use to monitor what works, why, where interest is coming from both geographically and from locations within the Internet itself. These tools amass numbers both in real time and after the fact. Traditionally speaking, shows on Fight Pass do not make much of any measurable dent in traffic. Some of this should not be particularly surprising. Many of these shows take place at times not conducive for mass viewing. Fight Pass itself is a burgeoning medium. The cards aren't filled with many recognizable names. It stands to reason even good Fight Pass shows won't be able to match what events with bigger names on more robust distribution channels can put together.

Which is precisely why Saturday's show was so special. I hesitate to be overly exact with comparisons, but UFC Fight Night 46 far exceeded what typical UFC events do on Fox Sports 1 in terms of driving traffic to MMA sites. In fact, it matched something approximately at the very low end of what a UFC pay-per-view event could be expected to produce.

That's significant. Interest in UFC Fight Night 46 isn't solely defined by the broadcast medium it's on. In fact, the show pulled record ratings on the terrestrial network that aired the event in Ireland. However, there have been concerns Fight Pass' relatively modest subscriber base could limit the attention a UFC event on digital network receives. That's now definitively not the case.

We should be careful about any further proclamations. Saturday's event aired at a time that made sense for many North American viewers. It featured the sport's top rising prospect. It was broadcast on national television in Ireland. Internet pirates had plenty of opportunity to steal a signal, thereby driving interest in the event if not Fight Pass itself. It was not a typical Fight Pass show. Yet, we should also take note about the capability of Fight Pass if the value proposition of network changes even just a little. Bigger stars at better times in anticipated bouts will not simply be buried because Fight Pass is too limiting of a medium.

Fight Pass is certainly the future and not the present. Pay-per-view, while slowly creaking to a somewhat ignominious end, is still the key revenue driver for Zuffa. After Saturday, though, you can begin to tease out possibilities of how Fight Pass can take on a much more robust and central role for the UFC.

I suppose cries of fight fixing from the endlessly suspicious are inevitable any time something goes smoothly for the high profile in important moments who have as much to gain as they do to lose. But that's not what we all saw on Saturday. We witnessed the very rare ascension that happens when a prospect's technical climb through a division is married with the ballooning of their promotional stature. It looked so effortless because it so hardly ever happens this easily.

Many times future stars kick off their UFC runs with inauspicious beginnings. They are often more revelations than fulfillments. Jon Jones was expected to be turned into ground chuck by IFL standout Andre Gusmao. Khabib Nurmagomedov had an interesting resume, but was another fight from Russia with a name difficult to pronounce. Even Ronda Rousey, despite her Olympic background, kicked off her career on ShoXC cards against opposition even most hardcore fans of mixed martial arts won't be able to name without a gander at her Wikipedia entry.

McGregor is quite different and a testament to the changing landscape and prowess of international regional shows. His very signing was precipitated by deep fan enthusiasm both in Ireland and North America as much as outright word of mouth lobbying. His run on Cage Warriors - something available to anyone with access to YouTube - proved he not only had the stuff to merit a UFC contract, but that a fighter could muster a genuine fan following on the regional circuit before ever setting foot in the Octagon.

The Irish featherweight is a natural self promoter, so that ushered things along, too. But the point is this: when a fighter's ballooning popularity is growing in tandem with their rise through a division, the results are exponential relative to one happening without the other. Demetrious Johnson's credibility at flyweight is untouchable, but he likely will never ascend to heights of popularity the still untested McGregor already enjoys. Recent acquisitions like Holly Holm have the promotional wind at their back, but the real concern over her ability to compete against other bantamweights who can wrestle and submit at a high level creates unease.

Not for McGregor. Yes, of course, he has to keep winning, at least up to a point. But he's clearly possessive of some ability. If UFC match makes for him appropriately, by the time he faces a legitimate threat, his star power and talent development could reach their perfect peaks. As MMA fans, we so very rarely get to witness the rise of the next big star in the sport while he or she is already treated as one. McGregor's magnetism and bravado are simply unavoidable. The longer he can keep this up, the more the answers to the question of 'What's possible for him?' will have to raise their ceilings. 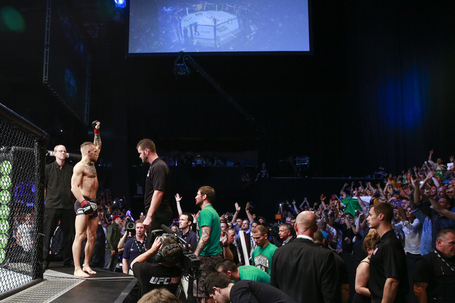 I love this photo because while people are screaming, no one's really talking to McGregor. And his mouth is silent. There's no verbal exchange taking place and yet, there is most certainly a conversation. The crowd is expressing their love and support. McGregor's gesturing is a thanks as much of a signal of shared identity. It's a 'Here I am, with you, representing me, representing you' moment. Everyone understands it. Everyone loves it, outrageously so. Check out all of Esther Lin's photos from Saturday.

McCall's had a rough go of it in the UFC when you really think about it. He legitimately beat drew with Demetrious Johnson, but was initially given a loss due to all-time commission cluelessness via arithmetic error. Sure, he got the rematch, but Johnson never makes the same mistakes twice. By the time they fought again, it was too late for McCall. The subsequent loss to Joseph Benavidez didn't help either. McCall was able to turn things around in late 2013 only to then tragically lose his best friend in Shane del Rosario. While I'm sure he's still reeling from that loss, he didn't just win on Saturday. He stood out. He looked back to form, at least in the later rounds of the contest. He took on a naturally bigger Brad Pickett and made it look easy. Whether he can beat Benavidez or Johnson, and whether he'll ever put the loss of his best friend behind him, it's impossible to say. But for a few minutes on Saturday, McCall looked the part. It's the adding up of the small victories that lead to the big ones. Here's hoping he can keep the small victory collection alive.

I don't have much to add to the superlatives already headed on the Irish, both at that event and generally. I've visited England a few times and without fail, the warmest and most engaging people I come across every time I'm there are, without fail, Irish. It's no surprise to me their love of their ascendant countrymen would follow in kind. Yes, some of their enthusiasm is specifically related to McGregor. Other portions of it were probably pent up energy from a five-year absence of the world's elite fighting organization. There's also no denying the Irish simply excel at fandom. They're a jubilant bunch at sporting events and their willingness to circle the wagons for one (or many) of their own is a sight to behold.

It should be noted the entire event was a crescendo. It started with an Irish upset followed by Cathal Pendred's epic comeback, Neil Seery's one-sided beating of Phil Harris, adopted son Gunnar Nelson's submission of Zak Cummings, Norman Parke's stoppage of Naoyuki Kotani and McGregor's win over Brandao. Would the Irish have been as enthusiastic had their fighters lost? It's impossible to say, but it deserves mention events transpired in a way to squeeze as much enthusiasm out of the audience as humanly possible and it was glorious to see it reach those heights.

I actually really enjoy the Fight Pass service. The search functionality is still a nightmare, but tweaking that is the most difficult task of getting any digital archive right. I am confident UFC will eventually get us there. Besides, if you can navigate it, though, there's a lot to enjoy. That's true for what is there as much as live events...with one major caveat: ads for future UFC shows.

I'm not privy to how the UFC makes their sizzle reels, but it appears they have a limited number of audio drops they recycle ad nauseum. These involve the same cliched sayings, typically screamed by their various commentators. It's like a weird pantomime, really, as if we're watching English dubbed over an old VHS-era martial arts flick from East Asia. The visual and the audio are totally divorced and they're clumsily stitched together. And when the ads are played in succession during a Fight Pass broadcast, it's just intolerable.

With the volume of UFC shows down the pike, I get the UFC has to make the ad creation process turnkey. But something has to be done. Either make one of the ads different and unique or find a way to space out the ads. Something. As it stands, I've never used my mute button so routinely as I did on Saturday afternoon.

I'll sympathize with the incredulous only a little bit. It is true the nature of heavyweight fighting - along with the division's storied history - lends itself more easily to fight promotion. Yet, being a heavyweight is only a sufficient condition, not a necessary one. We have to acknowledge the uniqueness of someone like McGregor, but he's also proof positive that the argument lighter weight fighters can't sell is just profoundly lazy thinking. McGregor is his own man, but he also demonstrates the current crop of lighter weight fighters is filled with milquetoast personalities. I don't say that as if to indict them fully as individuals, merely as lackluster self-promoters with all-too familiar personality types. Not everyone can be McGregor (which is essentially being an extreme version of one's self), but they can make more of an effort if they wish to enjoy even a fraction of the many of the same spoils McGregor's collecting.