If it was up to Anthony Pettis, he'd handle his critics the way he used on the streets of Milwaukee as a kid.

"Where I grew up if someone talks any type of mess you handle it a certain way, and that's what I'm used to," Pettis said on Monday's edition of The MMA Hour.

"As the champ things are a little different now," acknowledged Pettis, who is currently shooting the latest season of The Ultimate Fighter out in Las Vegas. "I'm trying to keep my composure and not get into situations."

Fortunately for Pettis, he knows knows when he'll be able to return to the Octagon and take out his frustrations in a professional manner. Pettis has been on the shelf since injuring a knee in his title victory over Benson Henderson last summer at UFC 164. But he announced on the MMA Hour that his title defense against Gilbert Melendez will take place on Dec. 6 in Las Vegas at a venue to be determined. 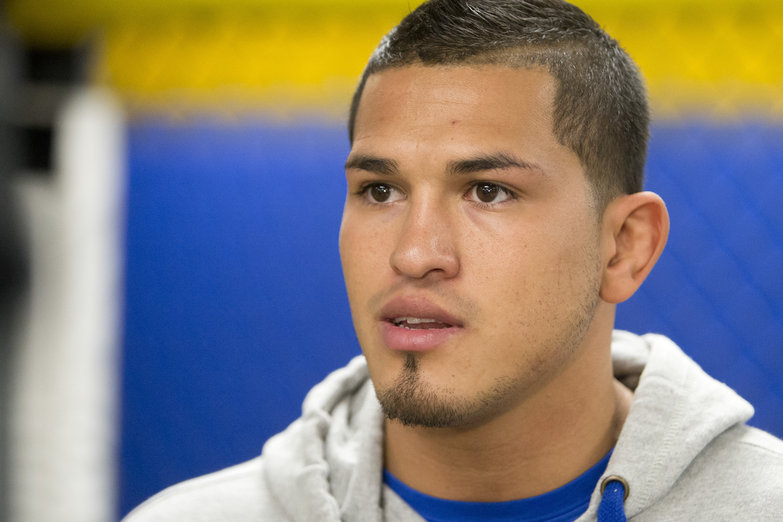 In the meantime, Pettis has had to endure slings and arrows from the rest of the division. This isn't the first time Pettis has missed time due to injury, but now that he has the belt, he's more visible than ever before.

And while some fighters might pretend the critiques don't get to them, Pettis isn't afraid to admit it.

"It does get under my skin at times," Pettis said. "Except when Ben Henderson is the one doing it, because I beat him twice. That's what was supposed to happen. The UFC's job is to make challengers, not champions. If the champion is dominant, everybody is watching him because they want to see him lose it at some point. Its interesting how the whole thing works.

"I can't sit back and chuckle it off," Pettis continued. "It gets under my skin."

The crux of the criticism is that while Pettis has the potential to become a superstar thanks to his sensational style, that same spectacularity has caused him to become injury prone.

Pettis dismisses the talk. He points out that the knee injury has kept him sidelined was due to a simple leg kick thrown by Henderson during their UFC 164 bout.

"My fighting style is crazy, but at the same time I've been martial arts since I was five years old. I've been fighting the same way since I was five," Pettis said. "The training camps aren't the issue. I used to think it  was the training camps I toned it back in training camps. It was just one kick he threw, an inside kick he was aiming to the shin, I didn't check it right, it was the right amount of impact, and the right angle .. it's weird to me. I'm not going to go in and change anything up, if I change anything up maybe I won't have the right performance."

All that said, Pettis is turning the corner. He's earned an endorsement deal with Reebok; he's in the running to appear on a Wheaties box; and most important, he's back to full training. Pettis said if he wasn't shooting TUF 20, he'd be able to go into an all-out training camp for a fight now.

"I'm in training camp now, out here in Vegas, sparring, rolling, doing things normal again," Pettis. "I gave the injury the right amount of time off, and I'm ready to be back in the Octagon. The TUF thing I something I couldn't say no to. It's one of those things that, it boosts my star power, I use it as the opportunity to train at other places."

Meanwhile, Pettis says he's impressed by the caliber of fighter competing on TUF 20, in which he coaches opposite Melendez. This is the first all-women's season of TUF, which will culminate in the crowning of the first women's strawweight champion.

"I didn't know what to expect when I came to this show," Pettis said. :This was my first time seeing all these. I show up to gym the first day to see who we're coaching, and I was impressed. These girls have skills. I'm pretty judgmental when it comes down to real skills, I can tell if somebody is tough and they think they can fight of if they actually have real skills. Some of these ladies have it. They throw. The fights that we've had so far, that's going to be a fun season."