Ross Pearson’s victory disappears in the ‘Land of Enchantment’

One thing about New Mexico is that it certainly lives up to its claim of being a "Land of Enchantment." There’s Taos to the north, a place of sage whitebeards and rainsticks (gorgeous if you’ve never been). There’s Truth or Consequences, which speaks for itself…there’s Alamogordo, which translates happily as "fat tree," and the Carlsbad Caverns, and more natural wonders like Keith Jardine…

And then there’s Jeff Collins, an MMA judge. This is where things get freaky-deaky lonesome cowboy sipping "red eye" from the ladle weird. Not at Roswell, where aliens are a dime a dozen. Things get weirdest at Collins.

On the UFC’s inaugural visit to Albuquerque, for so long made famous by the Russian-accented coach Greg Jackson and his partner Mike Winkeljohn, Collins showed a type of enchantment that may be unparalleled in MMA. He was cageside for hometown hero Diego Sanchez’s fight with Ross Pearson and, through what can only be called "the power of Tony Robbins," saw a fight where Pearson fairly convincingly won all three rounds for Sanchez.

Collins scored it 30-27 for Sanchez, who was dropped a couple of times, trampled in technique, outsmarted and outclassed throughout. Sanchez came forward winging bombs on occasion, as he’s been known to, but Pearson was cool not to get into a sustained gunfight. He picked Sanchez apart, working hard shots to the body, staying outside with trigger poise and generally being selective with his offense. You know, like somebody executing an effective game plan. In all three rounds he outstruck Sanchez statistically. The wrestling, that was supposed to be Sanchez’s path to victory, was shutdown-to-nonexistent. The second round wasn’t even close.

It was Pearson’s fight from the opening bell. Until…heaven forfend…until it wasn’t. Until the scorecards were read and the feeling of "why bother" rolled once again over the fight game, flattening us like a bunch of Sisyphus’s under the same damn boulder. That’s where it hurts most. It was the same. Damn. Boulder.

The only reason we aren’t speaking about judge Chris Tellez’s still astonishing 29-28 score for Sanchez is because Collins (apparently) got so drunk on Sanchez’s good vibes. I said on Twitter that "30-27 for Diego is a side effect of peyote." That’s not entirely true. The sad fact is, even somebody in the hot clutches of a peyote trip could have seen that Pearson was winning that fight.

So what happened? The Dream? The Nightmare? The power of positive thinking? Yus! Yus, yus, yus! Whatever it was, Collins saw a fight nobody else did. Except maybe Sanchez himself, and even there not entirely.

Which 30-27 score Sanchez thought was "ridiculous" is the question, but one can infer that he meant the 30-27 scorecard that went in his favor, given the context. Why is a 30-27 score glaring in his favor? Go back and watch that second round, and try and come up with any rational, logical, earthly way of explaining how a judge could see that for Sanchez. 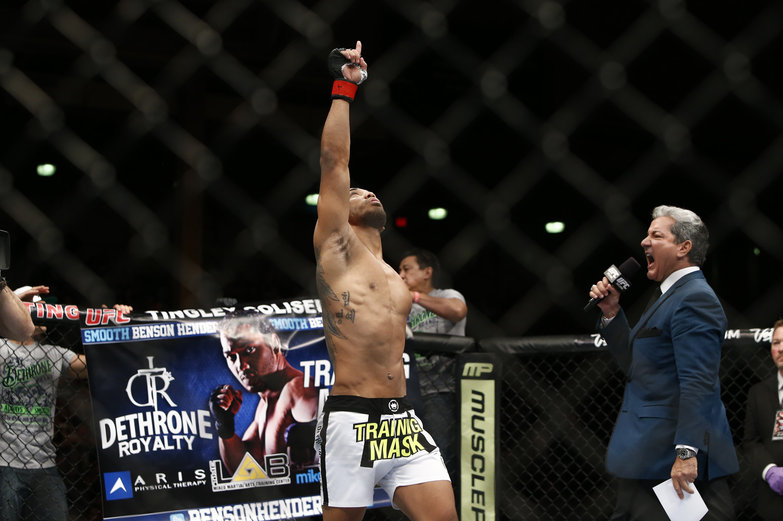 At one point, with about 1:20 left in the round he was soundly winning anyway, Pearson landed a right hand that dropped Sanchez. Sanchez got up and did some sadistic Diego Sanchez-type gesturing to bring it, and as he came forward, Pearson grabbed his leg, tripped him down again, landing a couple of other hard shots. Diego countered with a clinch, and threw two knees into Pearson’s forearms. As the round came to a close, Sanchez came forward aggressively, but landed virtually nothing of note, except some glancing shots off Pearson’s arms.

If the Tingley Coliseum was positively electric for Diego Sanchez, then the judges -- with the exception of veteran judge Marcos Rosales, who overcame his goose bumps to score it 30-27 for Pearson -- were the dimmest bulbs in the building. The word "robbery" is kicked around in MMA a little loosely, but this one was a jaw-dropping robbery. Collins made himself into the state’s greatest outlaw since Billy the Kid, whose tombstone lies in nearby Fort Sumner, New Mexico (also gorgeous).

How MMA will fix the problem of this kind of judging still seems like a work in progress. Perhaps by now we shouldn’t be overly surprised when a judge -- who has the control to trump our sane ideas with subjective reasoning (or no reasoning at all) -- comes up with the exact opposite score of the one we expect. It happens more times than we can recount.

But this one felt more egregious than most. Pearson won the fight. Even if you said he didn’t, he at least won the second round. There should be no denying it. A 30-27 score is next level ridiculous, on a night when things were already strange. On a night when Bryan Caraway treated Erik Perez like a largemouth bass, and Jason High pushed a referee after a borderline early stoppage, Collins -- and Tellez, too -- ended up stealing the show by telling us not to believe our eyes.

That’s a problem in MMA. Judging is a problem. And the more you see fights like Pearson and Sanchez’s swing the wrong way on the scorecards, the more disenchanting the whole thing becomes.