As many suspected, Vitor Belfort tested positive for elevated levels of testosterone in the random Nevada State Athletic Commission drug test he underwent while in Las Vegas for the World MMA Awards on February 7, 2014.

Belfort, who previously maintained that the results of the random test were "irrelevant" because he was not applying for a license to fight in Nevada, released the results of the failed test on Friday in advance of his June 17 hearing with the NSAC, where the polarizing Brazilian will attempt to apply for a license to fight Chael Sonnen at UFC 175 as a replacement for Wanderlei Silva.

"At the time that test was taken, I was considering filing for a therapeutic use exemption (TUE) for testosterone replacement therapy (TRT) from the NSAC," Belfort wrote via a statement on his Instagram account. "While I had not made formal application for a TUE, the NSAC nonetheless requested I take the test and I willingly complied. I further confirmed to the NSAC, in writing, the widely known fact that I was then presently on TRT and had been for many years leading up to that test and that I had further taken the TRT dosage recommended by my doctors the day prior.

"Since that February 7, 2014 test, I have taken several subsequent tests, in late February, March, April and May, and the results of each test indicate my levels were either normal or below normal," Belfort continued. "To avoid any ambiguity, I am releasing, along with this statement, the results of all tests noted above and will provide the same to NSCA for their consideration as part of my licensing application. I further welcome any additional testing that the NSAC deems appropriate and necessary with respect to being granted the privilege of a license to fight here in the state of Nevada."

NSAC Executive Director Bob Bennett previously told MMAFighting.com that Belfort's application will undergo a "comprehensive review" at the NSAC's June 17 hearing, and that the commission will likely require Belfort to undergo supplementary drug testing before the commission reviews his license.

"The UFC organization supports Vitor Belfort's application for a license to compete in Nevada, and we respect the Nevada Athletic Commission and its licensing process. Pending Commission approval, we look forward to a great fight between Vitor Belfort and Chael Sonnen at UFC 175 on July 5." 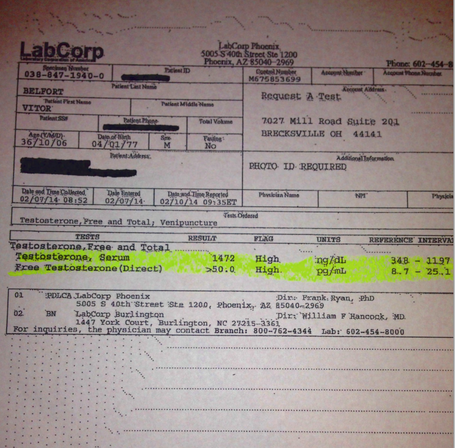