Note: To those who care Part 5 can be found here:

Why 2013 Kicked this MMA Fan's @ss Part 5: May: Lionosaurus "Wrecks" and Clash of the Titans

All right, let's pick up where we left off, shall we?

It brings me sensory overload and great joy with a Limb-snapping, record-breaking, submission extravaganza, then tortures me like Bolton's Bastard does Theon with:

That's why the Gambling Gods gave us coins to flip, and Brazilian cards always deliver.

Notwithstanding the conspicuous absence of Vai Morrer chants, this card did not disappoint as it shattered the record for the number of submission finishes on a single UFC event with eight (8!), topping the previous total of 6 that was held by three events.

We also get to witness 2 close decisions as well as Thiago Silva KO Rafael Cavalcante and Felipe Arantes KO Godofredo Pepey - both 1st round KOs.

Not to be left out of the Submission Bonanza, Fabricio Werdum gets his revenge on Big Nog via armbar.

Note: I would like to write this line to thank Big Nog for putting aside his Espírito do porco and opting to tap instead of letting his opponent break his arm this time.

Historical Tidbit: This was the last UFC to be branded with the Fuel TV brand; on August 17, 2013, Fox Cable Networks discontinued the Speed and Fuel TV channels, replacing them with the Fox Sports 1 and 2 channels. The next Fox Cable UFC matches were branded as UFC Fight Night on FS1.

The next day, on June 9th 2013, not being content with only stinking up one organization, self-proclaimed Legend-KillerBrendan Schaub gets a special permission from the UFC to compete in Metamoris 2.

He enrolled in the grappling competition so he could "show off his "skills" and new love for Jiu-Jitsu":

"Jiu jitsu is my passion," "[There are] so many disciplines when it comes to mixed martial arts that I have to work on, but I just gravitate toward jiu jitsu. I just happen to be pretty damn good at it. I really haven't had to showcase it too much in the UFC. This gives me kind of the biggest stage in jiu jitsu to kind of show people what's up... It's more of a thinking man's kind of discipline."

Fearing getting knocked out by a sweep or armbar, Brendan proves that he's a thinking man and spends the entire fight stalling, doing the Kalib Starnes and refusing to grapple. 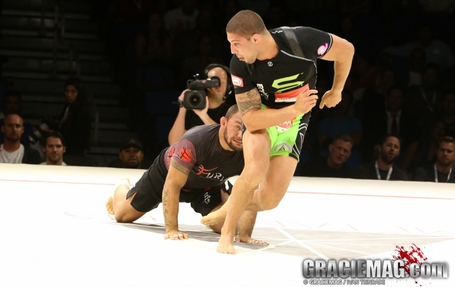 Here is an excerpt of Luke Thomas' Metamoris 2 Live Blog (you can hear him seething!):

In the end, time mercifully runs out and Roberto 'Cyborg' Abreu def. Brendan Schaub by decision

At the post-fight press conference (and in true halfwit fashion), Brendan manages to call one of his trademark boring performances as anything but and brags about "Shutting down his opponent".

He then brings up his fights against Cro-cop, Gonzaga, and Lavar to justify his masterpiece...

The Legend-Killer would later go on to say that: "his match at Metamoris helped Brazilian Jiu Jitsu"

Truth be told, his Metamoris "fight" was such an aberration that it actually caused the organization to change the rules of the competition.

Word to Schaub: When an organization whose sole purpose is the "promotion and holding of Jiu Jitsu competitions" decide to change its rules, it's because you are shameful disgrace to the genus of Homo Erectus.

It's like a pie eating contest having to specify that you have to eat the pies, not throw them at people. Idiot.

1 week later, Jon Fitch makes his WSOF debut at World Series of Fighting 3 : Fitch vs. Burkman. He succumbs to a guillotine choke in merely 41 seconds.

Fitch is clearly loosing the battle with life at this point. Unfortunately, he does not decide to retire or sit in his garage with the door closed and the car running.

The next day, it's time for UFC 161: Dog Shit, err, I mean Evans versus Henderson.

To be fair, this event was supposed to feature:

But the injury bug struck and we ended up with:

Side note: Sonnen was slated to replace Nog but couldn't get a work visa in Canada because of his conviction in the USA.

So with apprehension and the mantra of "Any fight is better than no fight" in mind:

This was fucking brutal.

9 mind-numbing decisions, including a Jake Shields fight where after getting his back pummeled into smithereens by Tyrone in the first, Simple Jack takes Woodley down and hangs on for dear life for the decision win.

If watching Brendan Schaub fight is as painful as watching a monkey trying to fuck a football, watching a Jake Shields fight is like watching a retarded child do calculus.

A friend of mine who is a huge Hendo fan was in attendance.

Here is a direct quote:

One would think that with a name like WINnipeg, only a positive could come from a UFC card held there!

As soon as I stepped off the plane, I immediately realized that I has stepped into a sewer. Not literally but figuratively as the city has the appeal of an AIDS-ridden Thai post-op ladyboy.

The fights only made my experience worse. It was akin to having a TV with 1000 channels and all of them all Kelly Ripa shows all the time.

From decision to decision, I drank myself into oblivion or so I thought. It didn't numb the pain. Jake Shields still walked out. I tried to summon the courage to hurl a can at him in a desperate attempt to get removed from the arena.

Alas, my will to live and fight were gone and I weakly dropped the can to my feet and prayed to Odin.

The only noteworthy glimmers of hope in this cesspool of boredom were:

I won't even bother recapping the rest of the event, 2013 has left me broken.

While Anderson Silva is skipping press conferences, Weidman's doing interview after interview, stating among other gems that: "he's to eff up Anderson's superfights with Jon Jones and Georges St. Pierre." "He wants to make beating Anderson look easy" he's thinks he's a nightmare matchup for him". He's worried that Silva might not even show up for the bout." (Cocaine is a hell of a drug!)

After most likely watching one of his own fights, Jacob Volkmann suffers blackout seizures one day before his WSOF 3 debut against Lyle Beerbohm. (He would end up winning the fight by boring ass decision).

Matt Brown states that he would destroy GSP and that Thiago Alves is tougher matchup (That's what you get when you mix meth with false hope and pixie dust...)

"It sucked. Shit fucking fight. Sucked all the life out of that place, I almost went home."
Dana White, making his opinion clear on Jake Shields' split-decision win over Tyron Woodley at UFC 161.

Yeah, the rest of the event was awesome...