Less than a week after Diego Sanchez's adventure across Dallas ended in a lethargic and disappointing decision loss last March, UFC officials announced that the promotion intended to take its traveling roadshow to Albuquerque, NM that upcoming summer for the first time in its history.

And like clockwork, Sanchez was soon on the phone campaigning for one of the card's vacant spots, rest and relaxation be damned.

"I was the first fighter from Albuquerque to be in the UFC and now I get my homecoming. I get my big fight at home. And for me, this fight means more to me than if I was fighting for the title, because this is realistically the last time that I'm going to get to fight in front of all my family."

Sanchez's persistence paid off, as he ultimately found himself locked into a co-headlining bout against TUF 9 winner Ross Pearson near the top of UFC Fight Night 42's main card.

Pearson has shown impressive flashes since reconsidering his ill-fated drop to featherweight, earning back-to-back knockout wins over George Sotiropoulos and Ryan Couture, along with a no contest against Melvin Guillard. Though Sanchez has his doubts whether the Brit will attempt to replicate the same aggressiveness against him in the cage on Saturday.

"He comes from Alliance, so he might try to play the hit and run," Sanchez mulled.

"Ross is a warrior and fighters have their own styles, but it's kind of known out there that the best way to go and try to eek a little points win past me is to try and play hit and run, try to go play tag out there and not try to knock me out. Like, ‘I can't knock this guy out, I can't finish this guy, so I'm going to try to just outpoint him.'

"That's part of the sport and I have to evolve past that," continued Sanchez. "I've worked very hard on improving my speed and my footwork, and I've implemented a lot of specific training to try to fill that hole in my game. But yeah, I think that a lot of guys try to play hit and run. It's probably the best way to fight me and come out victorious, but do the fans like that kind of fight? Does anybody like that type of fight?" 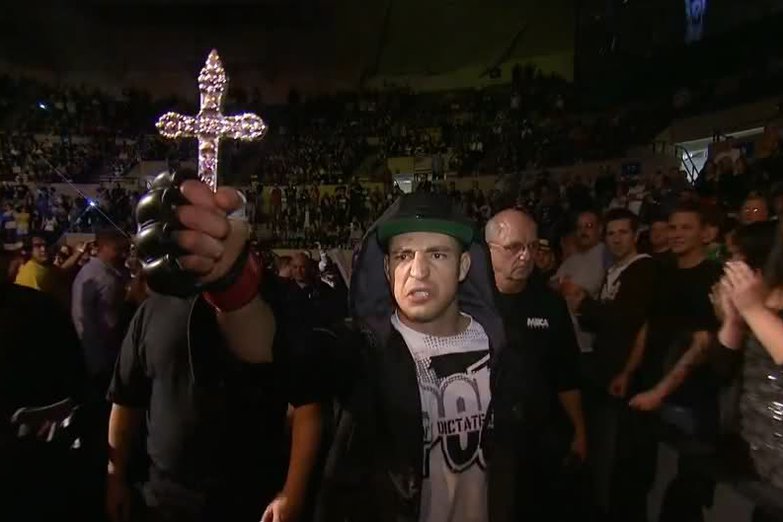 Considering that Sanchez's most recent performance, a lopsided loss against fellow Alliance product Myles Jury, followed a similar script as the one he laid out above, it's easy to understand where Sanchez's frustrations spring from. Rather than being coaxed into a brawl, Jury elected to stay on the outside and pick Sanchez apart at UFC 171, making the veteran look slow and more than a bit shopworn in the process.

Although Sanchez, still just 32 years old, maintains that the root of his problems that night rested in his choice of pre-fight meal, along with the ensuing food poisoning that laid waste to his system on the day of the event.

"I didn't have any energy, and then on top of that I was dehydrated because I couldn't hold water down, so I just went out there with an empty tank and it was just like my speed wasn't there, my energy wasn't there. If you noticed, I was trying to get myself pumped up the way I get pumped up in a fight ... but I didn't even have the energy to get pumped up.

"It wasn't bad luck. It was a bad decision on my part," admitted Sanchez. "And I learned from it, trust me.

"I was like, ‘I'm so ready, I can have whatever I want.' And I ate a super raw steak and I had a beef tartare with a quail egg as my appetizer. You know the age-old thing? The age-old boxers, like, if you eat blood, it's going to make you an animal? That was my mindset, as stupid as it is. I look back and I'm like... man, you're an idiot sometimes."

Regardless, the setback dropped Sanchez's record over the past two and a half years to a dismal 1-3, with the only win over that span coming in the form of a controversial decision against Takanori Gomi.

It's a pattern that has Sanchez concerned, especially because he's one of the last of a dying breed that starred on the inaugural season of The Ultimate Fighter, and with each loss, the criticism and calls for his retirement grow louder.

"I do, I feel the pressure," he admitted, adding, "It was a little disheartening to not be put in the EA Sports game. I'm not in the game, they're going to put me as downloadable content, I guess, but it was still disheartening for me to not be available. I wanted to get the game and give it to my son and have him play it. It was something I was looking forward to.

"But for me, I'm confident in who I am and where I am. I'm just happy to have my job with the UFC and my bosses, they know the level of heart that I have, what I've put into this sport. They know what I bring to the company. I bring really entertaining fights and the top contender, Gilbert Melendez, me and him had a war and I was able to drop him the third round.

"So I think people know where I'm really at," Sanchez finished. "I had one bad performance, and I still haven't even watched the Myles Jury fight, so I don't know how crappy I looked."

This time around though, Sanchez claims to have learned his lessons from the mistakes of his past, and expects to deliver the performance a lifetime in what may be the last chance he ever gets to fight in his native Albuquerque. His excitement level has reached the point where Sanchez even has planned something special for that moment when the curtains swoosh open and he walks out to his adoring hometown crowd.