Take one glance at the Twitter timeline of former UFC middleweight champion Anderson Silva, and somewhere among the myriad of Instagram videos showing the sweat-drenched Brazilian hitting mitts and kicking heavy bags with his titanium-fortified left leg, it's easy to get a sense about Silva's current motivations, regardless of his recent 39th birthday.

"He's definitely coming back," Silva's manager, Ed Soares, said on Monday's edition of The MMA Hour. "He's feeling good, he's training hard. Everything is good, man. Hopefully we'll see him back. We won't see him back any earlier than the end of this year or, most likely, the beginning of next year.

"There's always a chance (he comes back in 2014), but as of right now I think his mind is set on fighting at the beginning of next year."

Inside look into Silva vs. Sonnen rivalry 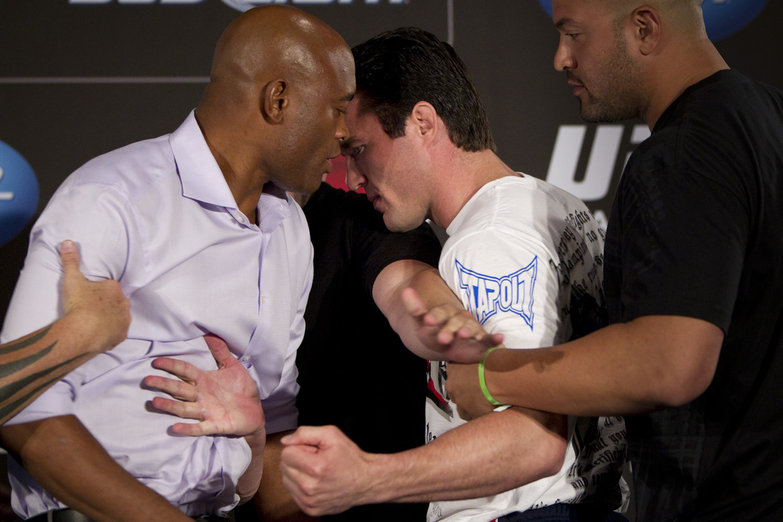 In the debut episode of the Static video series, Anderson Silva and Chael Sonnen discuss their memorable rivalry in the UFC.

One of the most accomplished fighters in the history of the sport, Silva (33-6) has nonetheless been relegated to the sidelines since suffering a gruesome leg break in the second round of his UFC 168 rematch against Chris Weidman. Although in the six months since the injury, his recovery has been nothing short of remarkable.

Now, as Silva draws closer to full strength with each passing day, fantasy matchmakers have already began to pick up the inevitable chatter regarding a suitable choice for a comeback opponent to challenge the former champ, one who could properly gauge if a post-injury Silva has anything left in the tank. And on that front, Soares has a few ideas.

"There's Michael Bisping, there's Cung Le. Even Nick Diaz," Soares said. "Nick Diaz has said he's wanted to fight him before. Nick Diaz wanted to box Roy Jones Jr. You could argue that Nick Diaz and Anderson probably have some of the best boxing in MMA, so we'll see what happens. Like we all know, so many things can change, the landscape of the sport can change so much in such a short amount of time.

"There's not a shortage of talent that the UFC has, so I'm sure the UFC is going to come up with a good plan on who the next opponent should be, and I'm sure it will be a good fight."