UFC Fight Night 42 (UFC Fight Night: Henderson vs. Khabilov) had a lot to offer. There was a sensational main event, a good overall main card, lots of stoppages and well-rounded fighters. There was also lots of eye pokes, illegal fish hooking and one of the worst decisions in UFC history.

It's time to separate the signal from the noise, the good from the bad and the winners from the losers.

This isn't the worst robbery in mixed martial arts history. I was there for that one, namely, Mike Easton vs. Chase Beebe. I commentated the fight, a five-round affair Beebe dominated with use of back control. That bout is still the gold standard in judging idiocy.

Saturday's co-main event, however, may just be a close second.

Let's just state this plainly: Ross Pearson won the fight. Handily so. You can turn off commentary or change the settings on your television or control for whatever influence you think could be skewing your perspective. It won't matter. The only logical conclusion is Pearson won.

I cannot believe we even have to have this discussion. Frankly speaking, this is an elementary call. We're not talking about a close bout that took place on the margins of clarity where trying to make heads or tails of each fighter's offense is some sort of laborious task. This is simple. This is straightforward. This is not work that requires noteworthy expertise. This is a call any competent judge should be able to make. No, this is a call any rational observer of moderate intelligence should be able to make.

Quite literally, there is no justification for awarding Sanchez the bout (or even a single round, but let's just assume for the sake of argument we can award him the first frame). It unequivocally does not exist. Yet, here we have Jeff Collins awarding all three rounds to Sanchez, which include one frame where Sanchez was aggregately out struck, knocked down and even taken down.

I mean this, honestly. I'm not even trying to be rude here: does Collins have vision problems? Is he going through a rough patch in his life and has issues with concentration? Did he actually watch round two, where all of this took place? I don't understand how a human being can have cognition and the capacity to reason, yet award Sanchez the second round. It's not possible.

I looked up Collins' record on MMA Decisions. The truth is he has some eyebrow raising scores in his past, but not enough to necessarily warrant not being placed in a position to judge this bout. His record isn't amazing, but up until Saturday night, there was not enough to disqualify him from doing the job.

I don't think I've ever used this space to issue such a harsh condemnation, but it wouldn't be the worst outcome if Collins lost his job as a judge. At an absolute minimum, he needs some form of re-certification and to work his way up from lesser shows again. He absolutely cannot be trusted to judge the contest of any fighter ranked in the top 50 of their division. There needs to be consequences for this sort of rare, monumental failure in the line of government duty.

This is disgusting and appalling and disconcerting and all manner of other abhorrent traits. I am trying not to be melodramatic about this. Allowing this level of incompetency to go untreated is a danger to fighters who make a living from fighting. Pearson will probably find a way to rebound, but that's hardly the point. By allowing Collins (and judge Chris Tellez) to continue as if nothing happened is to essentially play Russian Roulette with any fighter who has the misfortune of having to suffer under their woefully inadequate purview.

The issue is whether we deserve better. We, the fans, media, promoter, fighters and every other stakeholder involved deserves better. I know it's fatiguing to experience this deja vu of fail. How can we solve this problem when all one has to do to find more evidence of institutional rot and decay is turn over the first rock they come across?

Then nights like Saturday happen. No matter how intractable the problem seems, fighters like Ross Pearson deserve better. The principle is too important to the integrity of the activity to be eroded in the steady wave crashing of negligence and unaccountability. Never let the scale of the problem override our desire to fix it. We can't let go of that reflex. Not now, and especially not after Saturday.

Most in Need of Change: Athletic Commission Transparency

This leads me to my follow-up point: do you know how difficult it is to get in touch with Jeff Collins? Very. He doesn't appear to have any social media accounts of note. I don't have access to his phone number or email address. I've asked the athletic commission in New Mexico for an interview and haven't heard back yet. Hopefully that changes.

Yet, this is becoming a recurring theme in my career. Want to know why there've been no Bellator 120 live gate or attendance numbers? It's because I can't get the commission representative to respond to my emails, texts or calls (although they were forthcoming about the Rampage Jackson shoving incident).

There are some athletic commissions that recognize they are arms of the government in service to the state, and therefore, make transparency a core principle of doing business. New Jersey is one such state.

Many, however, do not share this willingness to expose themselves, either to the public or media or both. They shield poor judges or referees from fair inquisition and only open their procedures to the public when the law essentially requires it or the public has no ability to leverage it in a way to offer push back or criticism.

I suppose on some level I understand the instinct to protect judges or referees placed in difficult situations from unruly, angry online mobs. There is something to be said for their jobs being difficult and fans being completely irrational in their preferences and acts.

However, that should not serve as a shield from responsible scrutiny. For his benefit, ours and the commission's, Collins should be forced to publicly explain himself. We are talking about an all-time horrific robbery, not a close contest that hinged on the activity of a single round. If judges don't have to justify their decisions in that circumstance, then they never do. And doing so in private with a commission head where the two parties already have an existing relationship absolutely does not cut it as an effective screen.

Let's hope the commission in New Mexico recognizes the seriousness of the situation and decides transparency isn't just good for Pearson or the commission itself, but the sport they are charged with protecting.

Best Photo of the Night: The Duality of Fighting 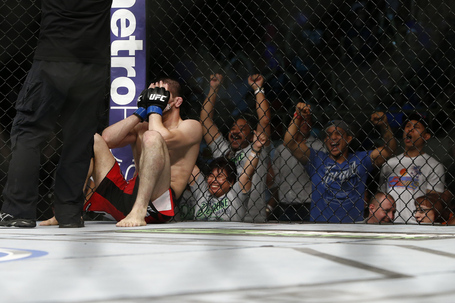 This is basically the binary reality of professional prizefighting. It's often (if not exclusively) crushing agony or joy, both personal and vicarious. If you didn't know the actual context, this photo would look weirdly incongruous. All of Saturday's photos can be found here.

In the end, maybe it was too much, too soon with a five-round fight opposite an elite fighter like Ben Henderson. That said, I thought he looked very good, all things considered. His wrestling, offensive and defensive, was there as much as he needed it. His striking appears massively improved, if still not clinical. His decision making also seemed to be mostly appropriate, turning it on when he needed it, changing phases of the fight when the situation called for it.

Obviously there's plenty to work on, too. His cardio didn't look sufficient, especially for a bout this tough against an opponent this credible. And while he made some good decisions in the fight, he could've managed the clock a bit better, too. Still, those are manageable tasks. These aren't insurmountable challenges that only few fighters can achieve. Khabilov needs time to work on his fitness and use this experience to help reshape how he moves forward, but showed enough promise to inspire confidence about an even brighter future.

Everyone is allowed to rail against the media, mostly because there's nothing we can do about it. We're a punching bag by default because responding to taunts or insults or yelling isn't part of our job. We have to take it and continue on with our day.

That's all fine, if you ask me. I have zero idea what yelling at the media accomplishes, but it's everyone's right. It's not going to change the way Henderson is covered, of course, because the way he's covered is a confluence of factors: how the public views him, how a writer views, what sort of traffic they draw, what UFC management says about him. The media synthesizes those influences into something of a singular picture. Whether the picture is accurate, at least according to that fighter's view of themselves, is certainly up for debate. People are complicated and media narratives are often not.

But why yell at the media here? The media play a role, maybe even a central one, but narratives come from hand holding. It's absolute fantasy to think we operate in some space where we invent how everyone is talked about. In large part, we respond to what's already out there. And while I grant what's out there may not be entirely fair, we aren't the architects of it.

Fighters can yell at us all they want, but I can absolutely guarantee if what they're yelling about is something we're discussing because the community has a strong feeling about it, they're wasting their breath.

No, there's no justification for touching a referee after a fight. I'm not here to absolve High from opprobrium. It's also fair to acknowledge High's opponent Rafael dos Anjos put on an excellent performance. However, can we all agree the trick of glaring at referees as a way to nudge them into a stoppage is the world's lamest thing? I'm not saying dos Anjos wouldn't have won irrespective of that. He certainly appeared to be cruising in that direction, but for crying out loud, can referees please stop worrying about whether a winning fighter thinks the bout is over and scrunches up his face as non-verbal communication that he should 'wrap it up, B'? How about looking at the distressed fighter on the verge of being stopped? Isn't that the guy who deserves closer inspection?

The Mexican national is a good fighter and despite losing to Bryan Caraway isn't going to be cut from the UFC's roster any time soon. He's valuable as the UFC pushes into Mexico and larger Latin America. That said, his talent level of is emblematic of the reality the UFC faces in Latin America, namely, good in some parts, but not very great. I've said I believe Latin America could be a greater boon for MMA and the UFC than Asia (an argument I won't rehash here), but the truth is the talent level may need a full decade to measure up to the standard set in the U.S. When you consider Perez is the tip of the spear of the soon-to-be Mexican invasion (discounting Cain Velasquez), you realize you have to have managed expectations about what's really possible in the short-to-medium run with either Perez or his country of origin.