Little did we imagine, when we compiled the pound-for-pound rankings just four weeks ago, that we'd be be revisiting things again by the time the month was out.

After a full week of hype in which UFC president Dana White tried to sell Renan Barao as the No. 1 pound-for-pound fighter in the world -- Jon Jones' dominance and Jose Aldo's four-and-a-half year title reign be damned -- T.J. Dillashaw came in and upset the apple cart in a way reminiscent of Chris Weidman's knockout of Anderson Silva last summer.

Except, Dillashaw's UFC bantamweight title victory over Barao, who was  No. 3 in last month's poll, was a 23-minute beatdown, as opposed to Weidman's one-punch knockout.

Dillashaw finished Barao in the fifth round at UFC 173, and punched his way into the top 10.

But it seems some of the panel remains to be convinced on Dillashaw, whose record includes losses to current flyweight John Dodson and current bantamweight contender Rafael Assuncao.

(For the record: I voted Dillashaw eighth and Barao ninth. I only have one vote of six and have no influence on other pollsters' votes. I submit my vote to the person who tallies them, then put the package together after the final results are sent my way).

Other than that, the results were more or less what one might expect. Jones and Aldo stayed one and two, getting unanimous votes for their spots. In order from there, Cain Velasquez, Demetrious Johnson, Chris Weidman, and Anthony Pettis all moved up a spot ahead of Barao and Johny Hendricks moved up one underneath him. Anderson Silva's inactivity is catching up to him, as he dropped to ninth, going unranked on three ballots. And Daniel Cormier looms, as he finished just one point out of the running, behind Dillashaw.

(Scoring: Fighters are given 10 points for a first-place vote, nine points for a second, etc., down to one point for 10th place. The results are then tallied up and presented here. Official SB Nation rankings policy: Fighters under commission suspension are ineligible to be ranked during the duration of their suspension or if they have licensing issues. This does not affect any fighters who would generally be considered for the pound-for-pound list at the moment. St-Pierre is considered a retired fighter and is thus ineligible for consideration). 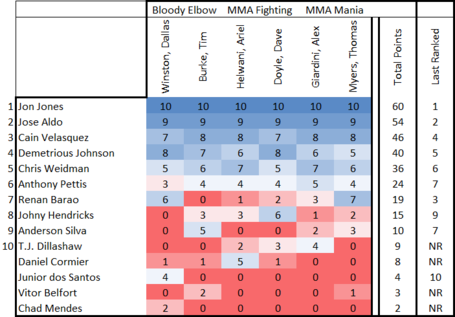 1. Jon Jones (20-1 60 points): With an Alexander Gustafsson rematch and Cormier looming, Jones has plenty on his plate at 205 for the foreseeable future.

2. Jose Aldo Jr. (24-1, 54 points): As of that date this is published, Jose Aldo Jr. has been featherweight champion, dating back to the WEC, for 1,656 days. This means he'd have to hold the title until July 14, 2015 to surpass Georges St-Pierre for second-longest Zuffa title reign in history.

3. Cain Velasquez (13-1, 46 points): Fall matchup with Fabricio Werdum has "trap" written all over it, between his long layoff (similar to the one before his loss to Junior dos Santos) and Werdum's habit of looking his best when he's been counted out.

4. Demetrious Johnson (19-2-1, 40 points): Johnson has been flyweight champ since Sept. 2012. With a win next month over Ali Bagautinov, Johnson would likely surpass his two-year anniversary before fighting again, which would make him the 11th UFC champion to reach the two-year mark in a single title reign.

5. Chris Weidman (11-0, 36 points): Former light heavyweight champion Lyoto Machida is next in the docket. A victory over Machida would give Weidman three straight wins over former champions.

6. Anthony Pettis (17-2, 24 points): With his fight against Gilbert Melendez not expected to go off until the end of the year, Pettis is likely to stay where he is in the rankings unless other champions fall.

8. Johny Hendricks (16-2,  15 points): Whether his next opponent is Robbie Lawler or Matt Brown, Hendricks should expect fireworks in his first title defense.

9. Anderson Silva (33-6, 10 points): The 39-year-old, injury-rehabbing Silva is closing in on two years since his last victory.

10. T.J. Dillashaw (10-2, 9 points): The next order of business for the new champ could be a chance to avenge his most recent loss, a split decision against Assuncao.