For quite some time, the top of all the major mixed martial arts top 10 pound-for-pound polls boasted a similar look: Anderson Silva in the top spot, then some combination of Jon Jones, Georges St-Pierre, and Jose Aldo Jr. in the next three positions.

Then we went through a condensed period of upheaval like few we've ever experienced in this sport. Silva lost his title to Chris Weidman, then lost the rematch. St-Pierre won a highly questionable decision against Johny Hendricks, then walked away from the title and the sport. Renan Barao shot up the rankings, and had his interim UFC belt made into the real deal. Demetrious Johnson cemented his spot as not just the first UFC flyweight champion, but the first great 125-pound champ.

And now that some time has passed, we've seen the emergence of what could be called the new normal. Jones, the UFC light heavyweight champion, battered Glover Teixeira at Teixeira's own game for 25 minutes at UFC 172. He's such an obvious choice for No. 1 in the current SB Nation poll that he didn't even get a single contrarian second-place vote.

Beyond that? We're back where we used to be, where a loss for anyone in the top side of the poll would be considered a solid-to-major upset. Jones doesn't have a legit loss in his career. Aldo's linear featherweight title reign is the longest current world title stint in the sport. Renan Barao has emerged as a killer and is a prohibitive favorite in his next fight. Johnson seems to have no end in sight to his title reign. And who's going to bet against Cain Velasquez any time soon.

In fact, all of the top nine in this month's poll remained the same as last time we did this poll, which is almost unheard of. Given that three of the guys in the bottom half of the poll (Anthony Pettis, Anderson Silva and Johny Hendricks) are all nursing injuries, there's not likely to be much movement there, either.

Of note, beyond the eight UFC champions and Silva, there was a huge dropoff for the 10th place spot. Former heavyweight champion Junior dos Santos claimed the position with just three points. He returns to action this month to face once-beaten Stipe Miocic. Vitor Belfort, the No. 10 fighter last time around, had his support drop all the way to two points after the series of events which caused him to drop out of his bout with Chris Weidman. Unbeaten Daniel Cormier also had two points; with a win over Dan Henderson and a Dos Santos loss, it wouldn't be too surprising to see DC crack the top 10 next time out.

(Scoring: Fighters are given 10 points for a first-place vote, nine points for a second, etc., down to one point for 10th place. The results are then tallied up and presented here. Official SB Nation rankings policy: Fighters under commission suspension are ineligible to be ranked during the duration of their suspension or if they have licensing issues. This does not affect any fighters who would generally be considered for the pound-for-pound list at the moment. St-Pierre is considered a retired fighter and is thus ineligible for consideration). 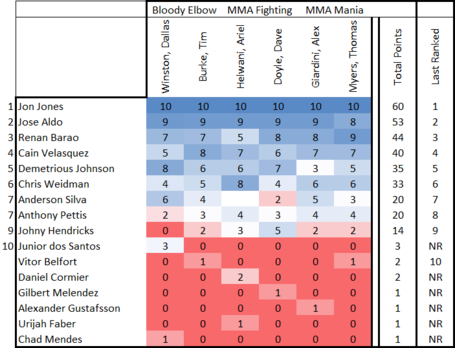 1. Jon Jones (20-1 60 points): You know you're dominating your division when you start recycling challengers. And as good as their first fight was, that's exactly what will happen when Jones rematches Alexander Gustafsson.

2. Jose Aldo Jr. (24-1, 53 points): Speaking of longtime champs recycling challengers, featherweight is another division at which a rematch makes sense. So when will the UFC get around to announcing Aldo vs. Chad Mendes?

3. Renan Barao (32-1, 1 no-contest, 44 points): If we consider interim title contests to be true title fights, and we consider the UFC and WEC to be the same linear bantamweight belt, then former champ Dominick Cruz is 5-0 in Zuffa title fights and Barao 4-0. This means Barao can tie Cruz's divisional record with a win over T.J. Dillashaw at UFC 173.

4. Cain Velasquez (13-1, 40 points): Many an elite heavyweight has made the mistake of sleeping on Fabricio Werdum. It's highly unlikely that Velasquez will do the same when they meet on Nov. 15 in Mexico City.

5. Demetrious Johnson (19-2-1, 35 points): Is it possible for someone to clean out his division in less than two yeas? If DJ beats Ali Bagautinov, who takes an 11-fight win streak into their UFC 174, then the flyweight champ might already be there.

6. Chris Weidman (11-0, 33 points): A victory over former light heavyweight champion Lyoto Machida at UFC 175 should shut up all but the most unhinged Weidman detractors.

7t. Anthony Pettis (17-2, 20 points): Will likely be locked into this section of the poll for quite some time, given that he isn't expected to defend his title against Gilbert Melendez until the end of the year.

7t. Anderson Silva (33-6, 20 points): Promising news on Silva's potential return, which could come by the end of the year. Until proven otherwise, Silva deserves his spot in the top 10.

9. Johny Hendricks (16-2,  14 points): Voters apparently weren't too impressed by Hendricks' performance, as he remained in the No. 9 spot after defeating Robbie Lawler to win the vacant welterweight title in the early leader for Fight of the Year.

10. Junior dos Santos (17-3, 3 points): There's a huge dropoff after the eight UFC champions plus Silva. Considering dos Santos is unbeaten in the past six years against anyone not named Cain Velasquez, he's as solid a choice for the 10th spot as any.