Just when you think you figured out the answers, T.J. Dillashaw comes along and changes the questions.

It seemed like Renan Barao was destined to lord over the 135-pound rankings for some time to come, with Urijah Faber settling into his second-place position, and the rest all jockeying to see who can become Barao's latest victim.

Then Dillashaw came along and shifted both Barao's brain cells and the paradigm in the bantamweight division. With a tour de force fifth-round finish of Barao at UFC 173, the Team Alpha Male fight ended Barao's 32-fight win streak (minus one no-contest), took his title and shook up everything we thought we knew about the division.

Dillashaw's dominant performance vaults him to the top spot in the current SBNation bantamweight rankings. He captured five of six first place spots and a second to finish first with 59 points. Barao isn't going to drop too far after just one loss; he claimed a first-place vote and five seconds to take second overall with 55 points. Faber, who is Dillashaw's teammate and has more or less cleaned up against everyone else except Barao, occupies the third spot, taking five of the sixth fourth-place votes. The man who seems the odds-on favorite to get the next title shot, Rafael Assuncao, snagged five fourth-place votes to take that spot with 43; and Michael McDonald got four of six fifth-place votes, claiming fifth with 33.

While there was a consensus on each of the top five spots, the rest of the top 10 has a Wild West feel. Takeya Mizugaki kept his win streak going at UFC 173 and took sixth with 22 points. Johnny Eduardo punched his way into the top 10 by knocking out Eddie Wineland, claiming seventh. Bellator champ Eduardo Dantas, OneFC champ Bibiano Fernandes, and UFC contender Uri Alcantara round out the top 10, with the latter edging World Series of Fighting champ Marlon Moraes for the final spot.

Of note, former bantamweight champ Dominick Cruz, who hasn't fought in two and a half years, has been ruled ineligible due to inactivity. He'll be eligible for consideration again once he has a fight date set.

(Scoring: Fighters are given 10 points for a first-place vote, nine points for a second, etc., down to one point for 10th place. The results are then tallied up and presented here. Official SB Nation rankings policy: Fighters under commission suspension are ineligible to be ranked during the duration of their suspension or if they have licensing issues.). 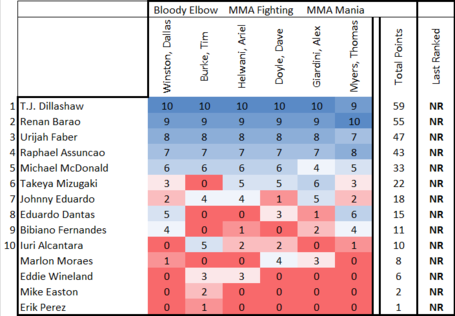 1. T.J. Dillashaw (10-2, 59 points): Dillashaw became the first fight who appeared on TUF without winning that season's tourney who went on to win a UFC title.

2. Renan Barao (32-2, 1 NC, 55 points): Assuncao seems next in line; Barao has beaten Faber and McDonald. Maybe Mizugaki next for Barao's next fight?

3. Urijah Faber (30-7, 47 points): Looking to shake off his UFC 169 loss to Barao, Faber's taking a bout with unranked Alex Caceres at UFC 175 which appears to have a lot more downside than up.

4. Rafael Assuncao (22-4, 43 points): The Barao fight which went to Dillashaw was supposed to be Assuncao's, but an injury kept him on the sidelines. We'll find out soon enough if the door will open again, but either way, he remains on a six-fight win streak.

5. Michael McDonald (16-3, 33 points): There's been radio silence from the McDonald camp since his December loss to Faber. No word yet on a next fight.

6. Takeya Mizugaki (20-7-2, 22 points): Five straight wins for the Japanese veteran. But all of them went to a decision, and none of them were Fights of the Night, which sure sounds like he's going to have to win a couple more to really push his way into the title picture.

8. Eduardo Dantas (16-3, 15 points): Dantas, whose last three wins have been by finish, will look to settle matters with interim champ Joe Warren as soon as he can return from injury.

9. Bibiano Fernandes (16-3, 11 points): The Vancouver-based Fernandes is making quite a living in Asia, on an eight-fight win streak during which he collected both Dream and One FC titles.

10. Iuri Alcantara (29-5, 1 NC, 10 points): Alcantara's win over Wilson Reis in February was notable simply because it went the distance. The Brazilian has 12 knockouts and submissions apiece.