Let me start with the most basic absurdity in the whole Wanderlei Silva-Chael Sonnen saga, and work my way down to the million smaller absurdities that have come of it.

The fight, for all the WWE-style theatrics, wasn’t that big of a deal to begin with. Admit it. It was all very…pre-chewed. You had a slick talker on one end, who knows how to stay close to the vital center of relevancy; you had a kind of folklore auteur on the other, who made videos taunting Sonnen behind metal guitar licks and menacing death threats.

Neither was on what you might call a "win streak." The 37-year-old Sonnen lost anticlimactically in his last bout against Rashad Evans, and has dropped three of four overall. The 37-year-old Silva has gone 4-7 since 2006. These cats weren’t going anywhere in the sporting sense. If anything, both were just trying to shoo the other towards retirement.

Yet because they put on an open courting display like a couple of Amazon birds, merit gave way to the "grudge." Aw yes, the grudge. We basted it like the Christmas goose. This grudge was what fueled the whole damn thing and made us part of the ceremony for more months than anybody signed on for. Wanderlei was forever puffing out his chest and speaking incomprehensibly, while Sonnen, snide as ever, stood by cracking wise.

From an audience standpoint, it was like hypnosis from gypsy perfume.

But it was absurd, too, because the fight didn’t really even seem competitive when you really thought about it. Like he did in the despicable, reprehensible melee that occurred during the taping of TUF Brazil 3 -- the one Dana White regretted/told us was must-watch TV -- Sonnen was just going to take Silva to the ground and…well, that was sort of the whole tale of the tape. The fight lacked imagination. 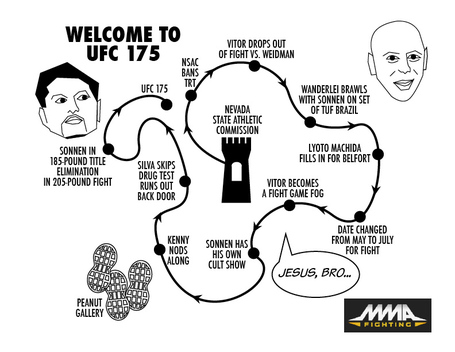 That is, if there was a fight. There was always doubt. It was supposed to happen at UFC 173, but Silva was injured in the TUF brawl. Doubts clung to it the whole way.

Then on Wednesday, the whole circus tent went up in a funnel cloud.

At some point this weekend, Silva "literally ran out a side door" when the Nevada Athletic Commission showed up in black suits for a drug test. We know this because Sonnen told us so. Sonnen, who has turned UFC Tonight into The Chael Show, a platform to perpetuate the Cult of Sonnen (and all things Sonnen) through light self-serving subjectivity, informed us that Silva had tarnished his already suspect name by fleeing, not only the fight, but perhaps the MMA landscape. If that weren’t enough, with the "Axe Murderer" now on the lam, Vitor Belfort was stepping in to fight him.

…Of course, here’s the point where the black hole opens and swallows all sound and meaning and reminds us just how small we actually are.

Vitor Belfort is one of the big reasons that the Nevada Athletic Commission abruptly banned testosterone replacement therapy. Belfort, who wrecked everyone in 2013 from Brazil, was the subject of all the scrutiny, and he was the catalyst for the change. He was supposed to fight for the middleweight title against Chris Weidman at UFC 173, but he took a drug test while visiting Nevada in February and from that point began slowly turning into a vapor man. With the ban he either pulled out of the fight, or voluntarily dropped out, depending on the company.

One way or another, Belfort became a persona non grata. Then Lyoto Machida was inserted to face Weidman in May, and that fight was later postponed until UFC 175 in July as Weidman had surgery to correct a lingering knee injury.

Now all of a sudden Belfort resurfaces to face Sonnen, even though he is as unlicensed in Nevada as Silva (and possibly even more so). He will have a hearing on June 17 to try and get his license. At which point the February drug test, heretofore rendered not relevant, becomes relevant (probably).

And here’s where we double-down on the baffling: Belfort and Sonnen will fight at light heavyweight on July 5 to establish a No. 1 contender in the…WTF? In the middleweight division? "Think of it as a catchweight," Sonnen said on His Show. We could! We could do that! Or we can think of it as a vortex, a kind of funhouse effect with distortion mirrors, which might come closer to what…whatever this is.

Sonnen, who skipped in front of the line when making the move to 205 pounds to fight Jon Jones, is now returning to 185 (now that Anderson Silva has cleared out) with a chance to do the same. How this is possible can’t be explained with a straight face. Belfort, who carries a wait-and-see asterisk to the fight with him, is headed back to Nevada, where all bets are off. Wanderlei, who crammed into our headspace for the last six months with all the things he was going to do to Chael, is now just a footnote to UFC 175.

He is gone. Poof. Finito.

Ronaldo Souza, Tim Kennedy and Luke Rockhold, the Strikeforce refugees who’ve all emerged as middleweight contenders over the last few months, will now stand by as Sonnen gets another chance. And Sonnen, who has the catbird seat yet again, is smiling that good Chael smile. He went from fighting in a grudge match of little bearing to a No. 1 contender’s bout in a division he’s no longer in, against a man who has largely become a figment of our imagination, just when it seemed like he was disappearing into a television studio.

Wait, wait, what just happened? Hell if I know.