There was a lot to love about UFC 173 on Saturday night. From T.J. Dillashaw's rousing upset of Renan Barao to the devastating boxing of Tony Ferguson to underdogs having their way, UFC 173 offered something for every fan to enjoy.

And yet, there was also weird matchmaking, lackluster fan enthusiasm and disappointing performances from fighters who are better than what they showed.

It's time to separate the winners from the losers, the good from the bad and the signal from the noise.

This entire site spent all yesterday and Sunday heaping as many superlatives on Dillashaw as we could, so I don't want to belabor the point more. I would like to add, however, one final note about it. I expect Dillashaw to look as good as he did on Saturday, if not better, in future outings. That doesn't mean he'll necessarily retain his title, although, yes, he could keep it to, too. I'm not here to make bad predictions on limited information about the future.

Instead, think about what a monumental occasion that must be for him. How many nights in your life do you get to change that much about your life in such a noticeable way? It's hard for me to think of any analogue in my life. I've graduated from college and Marine Corps boot camp, but those were just cumulative processes. There wasn't a single event or challenge I had to overcome that was uniquely more important than the others that alone held the key to success or vindication.

I've had my own personal and professional failings, but I'm proud of the things I've accomplished. And yet, I struggle to comprehend what it must be like to achieve that much on such a visible stage in one fell swoop. What is it like to change your life overnight? How does it feel to have a career's worth of frustration made usable in the course of twenty minutes?

It's not jealousy I feel towards Dillashaw, but an honest sense of astonishment. While preserving my own journalistic obligations of distance, I am nevertheless incapable of not feeling something about his achievement. When it's so grand in a hugely publicly, earnest way, it's impossible to dismiss.

If you're one of the group of skeptics who admire Cormier's achievements, but aren't convinced about what his top potential is, you've got a point. Cormier has a couple of incontestably strong victories, but an unusually high number of opponents who simply weren't on his level. When critics suggest we don't really know if Cormier can deal with the very best of the light heavyweight division, they're not offering those beliefs irrationally. The former Olympian's exposure to that side of MMA competition is largely nonexistent.

However, and perhaps more importantly, the best question to ask might be, "What did Cormier do with the talent he was asked to face?" In answering that, we should find consensus. The worst he's ever done is beat opposition convincingly if in such a way that was short on entertainment value. More often than not, though, he demolished opposition and Saturday night was no exception. Dan Henderson might be off TRT and 43 and on the downside of his hall of fame career, but he's still a formidable threat. Cormier tooled his fellow former Olympic brethren as if it were a staged acrobatic demonstration. 'DC' didn't throw bombs, but I'd submit that might've been intentional. And in any case, he did everything else to Henderson including finishing him.

So, hold onto your skepticism. It's not entirely misplaced, but don't let it overshadow what we also know to be true. Cormier is undefeated and at light heavyweight on Saturday night, did everything expected of him plus a lot more for good measure. 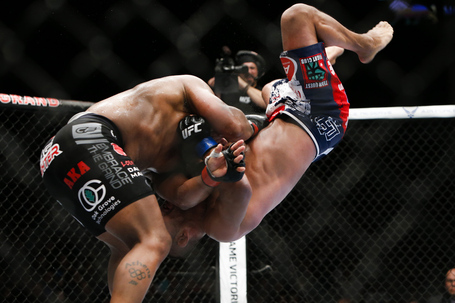 I picked this photo because almost more than any other, it exemplifies what this bout actually looked like. Sometimes fight photos can be deceiving, particularly when in close contests. Not this time and not this bout. This was a massacre, one filled with indelible moments like this high amplitude throw. Cormier is a brute, but one possessive of excellent technique and respect for the benefits of strategy. This picture is a testament to his brand of dominance.

I also chose this picture for what it lacks: the faces of the athletes. Fighting pictures often use the exaggerated expressions of the fighters that comes with their profession. This photo doesn't rely on that, instead showing the dynamism the sport exhibits. No faces are signaling emotions. We have all their combined shape and geometry to sell the moment.

Look, I get it. Kikuno is far from a world beater. He's far from being a gate keeper, if we want to get specific, and if anyone is attached to the idea of UFC serving as a meritocratic proving ground for the sport's best, it's me.

That said, I'm having a hard time understanding the sense in booking a fight opposite Ferguson. It seems deliberate, in retrospect, to produce the outcome it did, as if the UFC matchmakers were thumbing their noses at long dead Japanese promotions and their use of novelty over substance. It's a fine critique, but that argument is settled and over. Kikuno is now in the UFC's stable. Given the UFC's plans to return to Japan in the summer, I fail to see how this serves their interests there except in some narrow, long view way of making an example of Kikuno to let other fighters know what's expected of them (independent of whether they're even capable of that).

Kikuno is who he is as a fighter, and regionally a boon to UFC's push back into Japan. He's also totally unique as a personality and competitor, for better or worse. I'm not saying he should be given only winnable fights, but why the gratuitous trampling? Being good is more important than looking good as a fighter, yes, but looking good doesn't exactly hurt.

Most Clever in Victory: Mitch Clarke

I love the d'arce choke for a lot of reasons, not least of which is that you routinely see it as a transition weapon. As a fighter moves from one position or attack to another, either offensively or defensively, the d'arce appears as a real time plot twist to a fight's narrative.

Al Iaquinta, favored to win his bout over Clarke, was in cruise control on Saturday until a calm if opportunistic Clarke had the presence of mind to implement the choke, known for it's element of surprise. Fight fans rightly celebrate the joy of the unexpected knockout in mixed martial arts, but a little space should also be reserved for submissions that produce a similar dynamic in a different phase of the game.

Fighting Robbie Lawler is no easy task. I get that we can't hammer Ellenberger particularly hard for falling short. However, did anyone else watch that bout and think that was the sum total of everything Ellenberger had to give? I'm not asking if we thought Lawler wouldn't have won anyway, but rather, was he forced to get through all of his opponent to do so? I remain unconvinced. Ellenberger unleashes his ferocity to frightening effect almost as often as he lamentably buries it.

I'm sure 'The Juggernaut' will remain in the top 10 and perhaps climb to a title shot or number-one contender's bout. Yet, that's all irrelevant if he conceals what makes him remarkable and again brings him to the precipice of greatness he can't seem to take advantage of when it matters most.

I'm not suggesting there's a demonstrable trend taking place (although there may be; I simply haven't examined enough of the data), but this past Saturday's show pulled fewer fans at the gate for less money than past shows on the same weekend since the UFC made Memorial Day weekend shows an annual tradition. Consider the numbers:

You can interpret the (limited amount of) numbers as you see fit, but it's at least worth acknowledging the popularity of this show and perhaps more was lacking. Measurably so.

Could this all be because of the headliner? Was it the competition surrounding the show either on television or in Las Vegas itself? Was it the perception of the headliner in 2014 simply not being worth the effort or cost? It's hard to parse out what matters and how much, but there's no denying fans were noticeably less enthusiastic about this show.