There was really never much doubt that Jon Jones and Alexander Gustafsson would work their way back to a title rematch. At least, little beyond the "anything can happen in mixed martial arts" disclaimers.

But things went according to plan in what amounted to tuneup fights for both: Gustafsson steamrolled Jimi Manuwa on March 8 in London; and Jones followed last month with the seventh successful defense of his UFC light heavyweight title, against Glover Teixeira at UFC 172.

This month's SB nation light heavyweight rankings reflect the state of affairs at the top, as Jones and Gustaffson were no-brainer picks for the top two spots. The champion and and his once and future challenger were unanimous picks, with Jones taking all 60 possible points and Gustafsson claiming 54.

So, we wait for the details to be hashed out on when and where the rematch of the UFC 165 bout that some have called the greatest in UFC history will be contested.

In the meantime, the fact there are a pair of roadblocks at the top, doesn't mean things aren't heating up in the division underneath. For one thing, we've got a matchup of top 10 fighters coming up at UFC 173, where No. 4 Daniel Cormier will take on No. 8 Dan Henderson. A win for Cormier in particular would solidify his spot as the next in line for the Jones-Gustafsson rematch winner.

And then there's the fighter who rumbled his way back into the rankings. At one point in his career Anthony Johnson was trying to fit his light heavyweight frame into the welterweight class, then middleweight, with predictable results.

Now Johnson is in the weight class where he belongs, and that's bad news for the rest of the 205-pound weight class. Johnson announced his presence with his seventh straight victory, a game-changing win over Phil Davis. Johnson took four of six sixth-place votes, which was enough for him to crash the poll and take sixth overall. 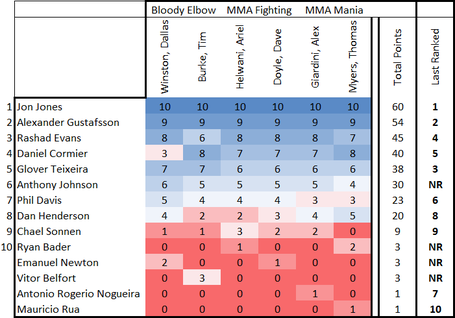 1. Jon Jones (20-1, 60 points) -- If Jones wants a real challenge, then he should go ahead and take the fight with Gustafsson on Gustafsson's home turf in Sweden.

2. Alexander Gustafsson (16-2, 54 points) -- Gusty did his part against Jimi Manuwa and left no doubt he's the one deserving of the rematch.

3. Rashad Evans (24-3-1, 45 points) -- On the road to recovery from his ACL surgery, the former light heavyweight champion is targeting a December return to the Octagon.

4. Daniel Cormier (14-0, 40 points) -- Cormier has made it clear that with a win over Dan Henderson at UFC 173, he'd be willing to wait for Jones vs. Gustafsson to play out and get his title shot, rather than fight again.

5. Glover Teixeira (22-3, 38 points) -- Teixeira is far from the first elite fighter Jones has made to look human. Teixeira still figures to be a tough out for anyone in the division.

6. Anthony Johnson (17-4, 30 points) -- It's rare that a non-championship fight is a true division-shaker. But "Rumble's" 15-minute dismantling of Phil Davis was exactly that.

7. Phil Davis (13-2, 1 NC, 23 points) -- As of now, Davis is a solid top 10 guy who simply seems to have hit his ceiling as a fighter. Can he make the mid-career adjustments necessary to break through and make a real run to the top?

8. Dan Henderson (30-11, 20 points) -- Improbably, at 43 years old and with a 1-3 record in his past four fights, Henderson is a victory over Cormier away from forcing his way back into the title picture.

9. Chael Sonnen (29-14-1, 9 points) -- Sonnen seems more concerned with sniffing out the biggest remaining money fights than rankings at this stage of his career, but he needs a win over Wanderlei Silva to stay in the running for both.

10t. Vitor Belfort (24-10, 3 points) -- Belfort technically still eligible at light heavyweight, since the middleweight fight fell out and his last fight was at 205.