So this Michael Page guy... his style is pretty ridiculous, isn't it?

One of Michael Page's favorite fighters to watch is Anderson Silva. Aside from being the most predictable thing you'll hear about the man they call "MVP," it's also a welcome coincidence considering that Silva's name appears roughly 200 times throughout the YouTube comments of Page's circus sideshow of a pro debut, which nearly 800,000 people have gaped at since its 2012 posting.

Another random upload of the fight, one with over 22,000 views, skips the pomp and delivers the goods right in its title -- Michael Page vs Ben Dishman New Anderson Silva -- because hey, subtlety is for the birds when it comes to the lawless struggle for YouTube eyeballs.

Also like Silva, Page loves to dance. That probably isn't surprising to hear either, I guess, but it's true. Body expression has always been his muse. When he was a kid, he'd put Michael Jackson records on repeat and meticulously unscramble the King of Pop's best moves. Grasping such incredible fluidity and creativity made him happy, he says.

But before we get carried away, let's be upfront. Michael Page is not Anderson Silva. As honored as he is by the juxtaposition, Page will always be the first one to agree.

But the Brit isn't some run-of-the-mill prospect either, is he? If you scoured over weeks of regional tape, how many guys could you find a quarter-second removed from popping and locking before they smashed some poor gentleman in the face with a tornado kick or a 720 kick or a where the hell did that foot come from and why are these lights so bright kick?

"He makes you want to watch," says Page's head coach, Alexis Demetriades, who to this day remains astounded by some of the moves the fighter pulls off during gym sparring sessions.

"You either want to tune in to see him get knocked out or you want to see what he's capable of. And I think that it was sort of like letting the cat out of the bag (in his pro debut). When you look at Michael, honestly, he'll provoke a reaction. You're either going to love him or hate him."

Page's unique combination of showmanship and ferocity will return for the first time in over a year this Saturday when he meets Ricky Rainey on Bellator's inaugural pay-per-view, in what is easily the biggest stage of Page's young mixed martial arts career.

But amid all of the shimmying and styling, the dropping of hands and gyrating of hips before unleashing a maelstrom of spectacular violence, an ongoing debate persists about whether Page is actually legit or just another flash-in-the-pan can-crusher, as one glance at any "MVP" related comments section can attest to.

In that way, the hype makes sense. Fighters like Page are rare. The 27-year-old's obvious flippancy, along with his apparent disregard for the boundaries we've placed on this whole ‘fighting' thing, are, when they're at their best, a spectacle that's able to transcend the sport, making even the most uninitiated viewer cluck with joint befuddlement and amazement.

That's why Page's progress is so compelling. In truth, he's still a baby in this game, just four years young. Yet he's already must-watch television.

"It's weird for me," says Page. "I've always been like this since I was young. I take aspects from so many different people that I think are amazing.

"Watching some of the kids who are absolute nobodies at the moment, I find them the most creative, because again, they don't care about winning or losing. They're just there having fun. They don't [care about the rules], so they throw some crazy kicks and some crazy punches, and I'm like, ‘man, let me take that one down because that was good!' I could watch a Jackie Chan movie or anything just be, yo, I actually like that technique. I'm going to use that. Everybody who's anybody, I really appreciate them."

Before of all this, Page was known as one of the flashiest and most talented freestyle kickboxers in all of Europe. He became a world champion at the age of 12 and stuck around the circuit long enough to win nearly every kind of World Cup or one-off Prize Tourney throughout the region. On competition days he'd often fight up to 14 times across three weight classes. One day he fought around 22 times across five weight classes, including openweight, as a sort of foolish experiment. (He won all five.)

Now MMA is his new frontier, but the creativity Page regularly displayed on the mats has carried over.

"I definitely think people don't take enough risks in this sport," he says. "I can understand why. Obviously people need to remember, this is their career. But for me, I genuinely don't know how well I'm going to be doing in this sport, so I might as well have as much fun as I can for as long as I can."

Fun, it seems, is what Page embodies.

He claims to have been nervous as all get-out before his aforementioned pro debut in early 2012. The claim seems like a bit of a stretch -- after all, men that nervous don't tend to move like water. His requisite lack of dance moves as he stalked down the red carpet and into the UCMMA cage may have been a telltale sign, although it's not like you could tell once those mesh doors swung shut and the theatrics begun.

"I like to be dancing or smiling or shouting or doing something. But that day, I was literally so nervous about what was going to happen, I just walked straight into the cage," Page says. "Then the second that the bell rang, I felt fine.

"When I first came over (to MMA), I just wanted to try something new. It wasn't a case of, let me really make a massive career out of it, and so on and so forth. But I did. So I'm not going to come over here and hold back.

'[Michael] makes you want to watch. Honestly, he'll provoke a reaction. You're either going to love him or hate him.'

"I'm just going to be myself and express myself, and that's the way I like to express myself. I think people don't take as much risks because they do care a lot more about the win or lose. But for me, even if I were to lose, I know I'm going to come back and I'm going to put on another show in my next fight."

When he first walked through the doors of London Shootfighters in 2011, Page never figured he'd be thrust into the vast unknown so soon. Demetriades warned him to expect getting two years of jiu-jitsu and wrestling under his belt before even sniffing an amateur fight, much less a professional one.

Yet four months later there Page was, hurled into the Dishman fight, with Coach knowing that his talented pupil would either sink or swim in this strange new world.

Demetriades was confident, but even he couldn't have foreseen what would ultimately take place.

"Michael can do a lot of things, but getting away with it in MMA is a different story," Demetriades says, recalling his initial struggle to reign back Page's flash -- a struggle which persists to this day.

Page danced and kicked and destroyed Dishman in an embarrassingly one-sided fight. Whispers of a British "Spider" churned across the London fog, and video of his pro debut exploded into a viral sensation seemingly overnight. Since then, Page hasn't stopped.

He says he views MMA as an art of sorts, where he can paint broad crimson strokes across a canvas in ways others see unimaginable. The philosophy has thus far worked, as the lanky welterweight continues to test the limits of his ingenuity while adding miles to his already lengthy highlight reel.

"Weirdly enough, I think the more comfortable I get with my jiu-jitsu and my wrestling, the more flashy I'm going to get," says Page. "Because I'll know, if I do something flashy and mess up, and you grab me, I'm still comfortable, so I'm going to continue to wrestle back, stand back to my feet. I think people (who say I'll have to tone it down) are seeing it the wrong way.

"Who would have told you that running across the cage and kicking someone in the face was going to work until you tried it? When I saw [Anthony Pettis' Showtime Kick], I was like, that is crazy. What would have made him do that? I'm sure he didn't train that. It's just one of those things that you kinda feel in the moment, and defending something like that is hard because it's not something you would see.

"It was an amazing way to put away such a high level fighter. That's exactly what I'm saying when people say, ‘well could you see yourself doing it when you get to that high level?' There are already people doing it at a high level! So it shouldn't even be a shock."

Ultimately, the knock on Page at this point in his remarkable career is the relatively low level of competition he's pirouetted atop while collecting his wins. Rainey is far and away the most accomplished fighter Page has challenged thus far, but Demetriades is quick to point out how unfair the criticism truly is.

"Everyone says wait until Michael meets a jiu-jitsu black belt or a wrestler or this or that. The kid has only had five fights," says Demetriades, ever the voice of reason. "He's going to meet those guys eventually, and when he does he'll be more than ready and capable. 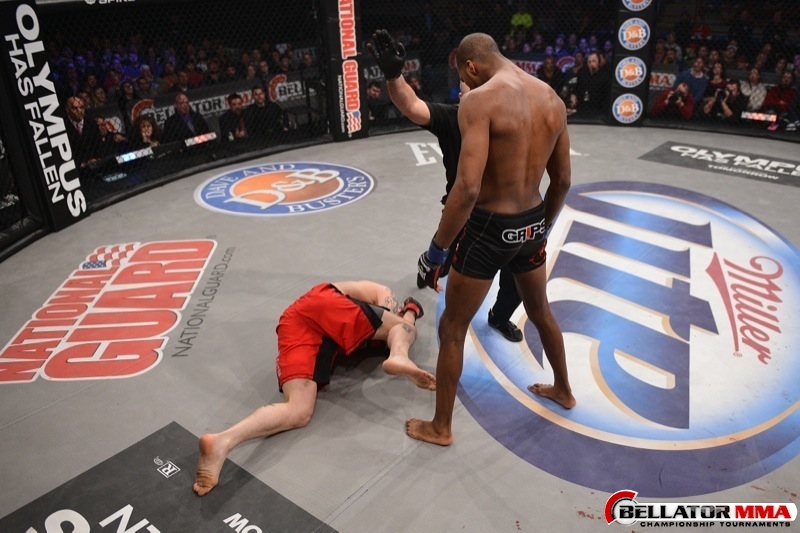 "I've trained guys who have gone three rounds with Anderson Silva. I've had top-10 UFC guys. I've had a lot of good guys. And I absolutely think, if he's managed correctly and he keeps on training how he's doing, he's going to do something very, very special.

"Because here's the thing about Michael: his style, it's pretty ridiculous, isn't it?"

Mixed martial arts is a curious sport. Regardless of how early a career may be, we seldom allow a fighter to exist as an in-between. Savoring the spectacle of an enjoyable new voyage is rarely enough to satiate the masses, we must also poke a few holes to see if the vessel still floats.

And so we go back to those pesky YouTube comments, where in profound moments of strangeness, a largely anonymous freestyle kickboxer continues to find himself in the center of a discussion about whether he's the next wunderkind of his new sport, or simply an arrogant wannabe who would learn a well-deserved lesson the moment he crosses paths with a wrestler, as if those are the only two options, or that question even concerns him.

"If you were to ask me before I did my first fight, I would have never seen me doing this now," Page admits. "I feel like I've jumped up quite quickly. Now I want to take over Bellator. I really want to dominate Bellator. Anytime I'm on Bellator shows I want to be the main event. I want to be the biggest name to come out of Bellator. I just want to really be a massive draw, because I believe in my style. My friends and family, they've showed their aunties, their grams, all these people who aren't interested in MMA, they've showed them my fights and they all get excited as well. It makes them care about MMA.

"So I want to bring new flesh, new eyes to the sport as well. For me, that's my goal. Obviously I'm going to have to keep progressing. Eventually go into the tournament. Eventually get a belt. Eventually defend the belt. I just want to be moving forward, step-by-step.

"But you're always going to get a show when I step in."