After seeing friend and former training partner Pat Barry suffer yet another knockout, former UFC heavyweight champion Brock Lesnar has seen enough. According to UFC president Dana White, Lesnar reached out to his former boss in an effort to convince Barry to call it a career.

"Brock Lesnar called me and begged me to make [Barry] retire," White said during Saturday's media scrum. "He said, 'I don't consider too many people my friend and I consider Pat Barry a friend. Dana, you've got to get this guy to retire.' I said, 'Listen he's a grown man, Brock. What am I going to do?' There's only so much I can do." 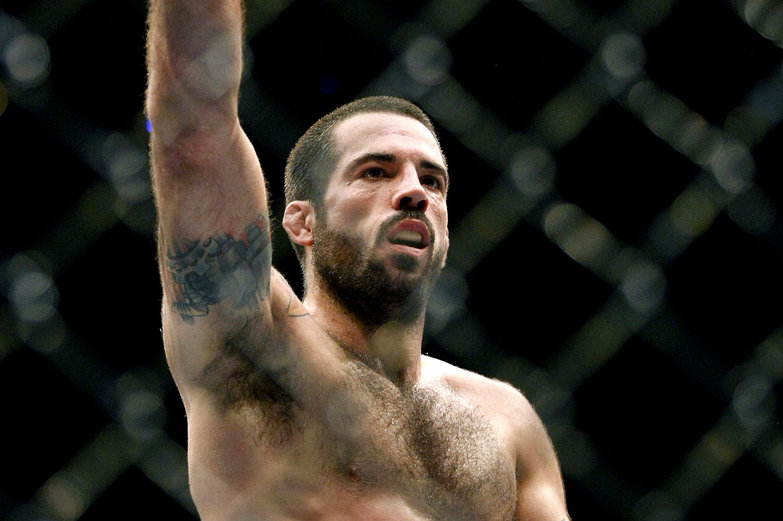 Teammates at the now defunct Team Death Clutch gym in Minnesota, Lesnar and Barry trained together through much of the former's brief UFC career. Once home to former Bellator heavyweight champion Cole Konrad, Death Clutch was founded by Lesnar after leaving Greg Nelson's Minnesota Martial Arts Academy in 2008. Predicated on becoming a haven for heavyweight grapplers, the gym disbanded following the retirements of Lesnar and Konrad in 2012.

"It's different with guys like Forrest [Griffin] and Chuck [Liddell] guys that I have relationships with for a long time and guys who have made a lot of money," said White. "That's the difference. Forrest and Chuck are multimillionaires. It's easy to make them quit. A lot tougher to make a guy quit that has to make a living."

Barry had hoped a return to his first love of kickboxing would spur a career resurgence, but that plan took a sharp turn May 3 at GLORY 16. Making his promotional debut, Barry was hurt badly early on before an uppercut from Zack Mwekassa ended the fight.

"I don't want to hurt Pat Barry or throw a monkey wrench into his life or anything, but at the end of the day, it's the state athletic commissions that need to step in and help a guy like Pat Barry retire," White said. "Or people that care about him."

Good news. After being stretchered out of the Octagon, Erick Silva thankfully did not suffer a concussion or fractured jaw, as was rumored.

Staying on PPV. With Eddie Alvarez out due to injury, Will Brooks steps in to face Michael Chandler at Bellator 120.

Diaz in limbo. Nate Diaz' manager says they're still waiting to have a meeting with the UFC, but that his client would be willing to fight elsewhere.

Healthy at last. Tito Ortiz says his health has finally let him train like he did in his prime. 'I haven't been able to go a full six days a week since 2002. The fight was announced and I just went four hard weeks, six days a week.'

Chael Sonnen vs. Wanderlei Silva in the TUF coaching challenge.

Behind the scenes of GLORY 16.

Make sure to check out our Pros React piece for instant reaction from UFC Fight Night: Brown vs. Silva.

I wanna thank all my sponsors. Thank you for believing in me!

"I trust myself and believe in myself. My goal is to be the champion, so I need to keep improving." - @Kyoji1012 pic.twitter.com/F21NBvBBNG

Hell of a night tonight. Wanted to dedicate this win to my Dad who passed away late last year, & Happy Mother's Day to my amazing Mom @ufc

It's a good night! @MannyGamburyan is tough and a true veteran. It was fun to fight him! Hope all the best to him in the future. #PartyTime

Had an amazing time in the cage tonight! I felt like this was one of my most dominating performance so far. I ... http://t.co/CsR9L8TIol 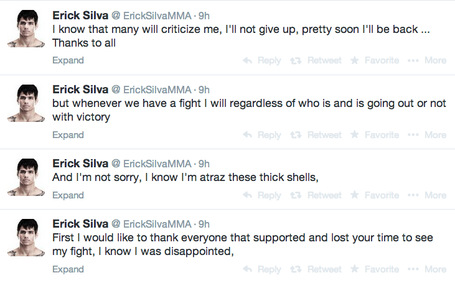 Can't wait to see my family. Gonna rest up and get back at it. Don't be bitter be better.

Didn't get the w! Looking forward to going home! #NewMexico

I would just like to say thank you to everyone who supported me for this fight, my family, my team, me... http://t.co/FoHup1xQQ7

Sorry and Thank you for all the support guys, GOD bless us all... Desculpa e Obrigado por tudo galera, q Deus abencoe a todos nos...

Just wanted to send a congrats to @JohnnyEduardoN on a great punch last night...congrats bud, I'll be back ;-)

I wanna thank everyone for the support my friends and fans. Luv u all @ufc it was tough fighting with one eye :( pic.twitter.com/TQDQSu3dtl

Sorry about my performance last night I had a good https://t.co/N6tcIF30Ml

So it's official I'm fighting Michael Chandler next Saturday on @BellatorMMA 120 on PPV. Let the hate and trolling begin lol

So it's official! I'll see everybody in Memphis and I'll be leaving with the belt anyway. Thanks to everyone for their support through this.

A star is born.

How are you @ufc main even with a 3:00 gas tank? What the Fuck people

Also... Matt Brown is not a human.

This stuff was stolen from my home. I hope this guys does right or jail. Someone is selling a bunch of your things. http://t.co/FeMMRoBTll"

Last year a neighborhood cat brought me half-eaten bird on Mother's Day...I can't wait to see what's in store for me today!

I dislike commercially driven holidays. That said, I expect to be given piles of new things today. Happy Mother's Day.

Michael Johnson vs. Josh Thomson at UFC on FOX 12

Eddie Alvarez out, Will Brooks vs. Michael Chandler at Bellator 120

Today's Fanpost of the Day comes via Justin Bouillon.

After Matt Brown's call for a title shot last night, I was left feeling like this should have been the fight to get him there.

He was set to face Carlos Condit, but with a back injury, Brown was forced to rehab while the fight was given to Tyron Woodley for the UFC 171 co-main event.

This was the fight that should have brought Matt Brown the title shot, but the injury set him back not only a few months, but it seems now maybe a few fights as well.

His matchup against Silva was a tough test for a fighter returning from a layoff due to injury. But In the cage he seemed unaffected by the time off, and looked like an ever bigger animal than he already was. However, the matchup was a step back in the rankings relative to Condit's spot.

I know Tyron Woodley had a lot of hype entering the Carlos Condit fight, but unfortunately, that fight ended in what can only be described as a fluke. Yes Tyron, I know you took him down and his knee popped, but you are not going to have me believe you practiced new take downs that break knees at the gym. I see it as the equivalent of a KO due to a headbut, you may have hurt the guy with it, but are you going to be proud of an accident (à la Johnny Bedford)?