On Wednesday, UFC president Dana White said he offered Nick Diaz a fight against Hector Lombard and was waiting to hear back from him.

"I tried to make Nick and Lombard," White said. "Nick and I talked, and I haven't heard back from him, he went MIA."

However, in a rare interview on Wednesday, Diaz told MMAFighting.com that he has already made his intentions and expectations clear.

"I never considered anything other than to renegotiate my contract or fight Johny Hendricks," he said. "All I said was, What am I getting paid? And he said, Let me check your contract. And the last text I got from him was what I would be fighting for. I didn't consider fighting for that kind of money. I didn't say anything back to him, right, but usually that means something. I'm not considering even for a second fighting any of those guys for less than $500,000. There's no way.

Last month, at UFC 171 in Dallas, Diaz told the media that he was interested in fighting again, but the 30-year-old, who last fought in March 2013, revealed on Wednesday that he is in no rush to return to action anytime soon and never wanted to fight in the first place.

"I'm not in love with fighting. I never was. That's crazy. I don't love to fight; I don't want to fight. I get my ass beat more when I win a fight than when I lose. I know you don't want to get your ass beat. I feel the same way. I feel the exact same way about retirement. I could give a f*ck.

"I'm not going backwards in this sport ever, especially in pay. Why would I? To get my ass whooped? No. I would rather work at Wal-Mart. I have enough money to buy a nice house, do some gigs, save some money. I feel like this whole popularity thing keeps escalating, too. It's weird. Everywhere I go, I get stopped. If I make eye contact with someone, they're like, Whoa, you're Nick Diaz! So I could do signings for a while.

"But I'm not so sure my heart was ever in it. I don't know what that means. If I'm getting paid what I want to get paid, hell yeah I'm into it. I'm not into it if it's not worth it to me. If they want to renegotiate, I like that. But if not, then I don't give a sh*t. I never loved fighting. I never wanted to fight. That's probably why I come off the way I do. These guys, either they're all a bunch of freaks and weirdos or they put on a front. I do martial arts. They line up a guy to fight, so that's who I fight. 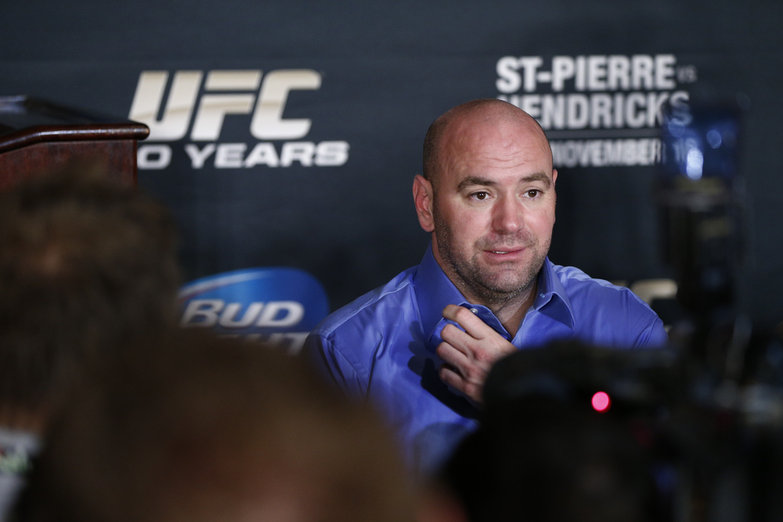 The UFC president responds to Nate Diaz's complaints about getting paid.

Naturally, Diaz has been paying close attention to his brother's ongoing issues with the UFC, and like any good, older sibling, he feels somewhat responsible for getting his young brother Nate in this predicament to begin with.

"You see this stuff about my brother right now? I gotta watch him go through that bullsh*t. It's kinda harsh. That's my brother. That's my fault that he's even in this. He doesn't want to fight either, but he's not going to get a job at Wal-Mart, and he didn't make a million dollars his last fight. So he doesn't have a lot of options, and I don't like that. Something needs to be done about that, especially when you have someone as entertaining as my brother."

Diaz, who has been fighting for almost 13 years, feels he has nothing to prove to anyone in MMA. So it all comes down to that contract. If he can't get what he feels he deserves, he's at peace with never fighting again.

"I'm ready to fight for the right money. It's worth maybe getting your face smashed in for that much money. But for less, I'd rather get a regular job and be that guy who used to fight, made a title run, Showtime/Strikeforce champion. What are they going to say? Oh, he was a never a UFC champion. I don't really give a f*ck. I was never getting my ass whooped either.

"I'm going to go to that [Manny] Pacquiao fight [Saturday night in Las Vegas]. I'm going to be the only UFC fighter there. Watch. What a bunch of ignorant motherf*ckers. They're all fighting, but they don't understand boxing. They don't watch boxing. When people knock people out [in MMA], it's by accident. And then they go crazy. Have you ever seen me knock somebody out and make a big scene? Hell no. I threw my hands up and walk around pissed off because, f*ck, that could have been me. That wasn't fun."