Manager reacts to Jake Shields' abrupt UFC release: 'It just shows you the nature of this sport'

Like Yushin Okami and Jon Fitch before him, it took just one poor performance for Jake Shields to be cut loose. Shields, who's currently the No. 11 ranked welterweight on the UFC's official rankings, was abruptly released from the promotion following a unanimous decision loss to Hector Lombard at UFC 171, despite the fact that it was his first setback in almost three years.

"I think, obviously, Jake was disappointed," Shields' manager Lex McMahon reflected on Monday's episode of The MMA Hour. "He is a guy who for many years has been a champion, fought on a championship level, been top ranked. He was on a four-fight win streak prior to the Lombard loss, so I think it was something that took him by surprise, but he's prepared to move forward."

Who is to blame? 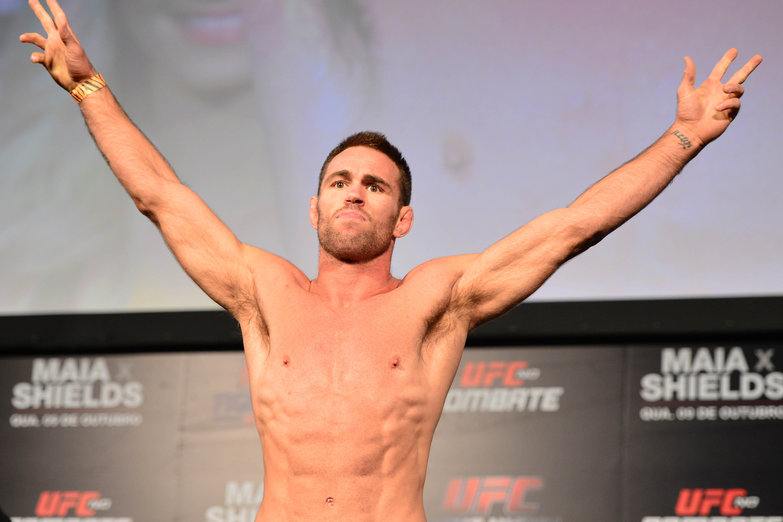 Jake Shields was released from the UFC on Monday. Some have cited his age or price tag or fighting style as reasons, but the question is why those things matter at all.

The sword dropped swiftly and without mercy for Shields, a perennial grinder who despite his occasionally dull style, was still poised to make a run at the UFC welterweight belt as recent as last month, when Shields and five other welterweights -- three of whom he'd already beaten -- jockeyed for title contention on the main card of the year's, thus far, biggest pay-per-view.

"To lose one fight and then all of a sudden be out of a job was something that I believe was surprising and not contemplated," McMahon admitted. "To be honest, we were really positioned and looking for Jake as a potential title contender, given the mix of the landscape after Georges (St-Pierre) retired. Jake had beaten pretty much everybody that was out there. He beat Condit, he beat Woodley, he beat Maia. So really, there wasn't too many other options. With the right performance, I think (he could've been fighting for the title).

"It just shows you the nature of this sport. The right performance, he potentially fights for the title. The wrong performance, he's looking for a new job."

For the UFC, just like Okami, Fitch and the promotion's disinterest in Ben Askren, the cutting of Shields is yet another acknowledgement that an athlete's worth to the organization is not wholly dependent on record alone, but rather, that a significant portion of that worth is also dependent on the level of excitement and marketability an athlete provides.

At 35 years old, Shields is still considered to be one of the most talented welterweights on the planet. However, since his fights often stretch to decisions and rarely move the needle of public interest, the former Strikeforce champion now finds himself hunting for work among the handful of second-tier MMA promotions that populate the landscape.

"Listen, the UFC, it's their organization. They have the liberty to do with it what they will," McMahon said. "Certainly it's surprising, but at the end of the day everybody knows the type of fights that they like to see. Jake grinds out wins, but the bottom line is that he wins, and he wins at a very high level. He beats some of the best guys out there.

"I certainly fought for Jake. Unfortunately, Dana and Lorenzo and Joe Silva had made up their minds, and at the end of the day it's their company and they do what they decide to do."

While the news of Shields' release is still fresh, McMahon said that there have no been shortage of suitors already angling to sign the American.

Among the more notable offers McMahon has received is a "aggressive" pitch from Titan FC in which Shields would receive equity in the company, as well as an offer from ONE FC which includes the carrot of a possible fight against Askren.

No deal has thus been reached, but McMahon made it clear that Shields' final decision will ultimately depend on which promotion provides him the "best economic incentive, as well as the best match-ups and the best opportunity to be on a big platform in terms of television." And while Shields may be creeping close to two decades spent in the game, he has no intention of stopping anytime soon.

"Listen, guys that talk about retirement, typically they're on the verge of retiring. Jake has not once mentioned that word to me. It's not part of his consciousness. He is very focused on becoming a world champion again," McMahon said.

"We are exploring the options, but I would say that at this juncture we've gotten some very interesting offers and some overtures from most of the players you would expect. I think Jake will have a new home very soon -- he's already being offered fights and opponents, so I don't think it's going to take long for Jake Shields to land on his feet with a new home."