The Holly Holm hype train is back in Albuquerque, N.M., Friday night, with the stakes perhaps higher than ever.

Holm will face Juliana Werner for the Legacy FC bantamweight title just weeks after her management team met with the UFC for the first time last month. According to UFC president Dana White, that meeting didn't go well, and he is no longer interested in her services. However, the general consensus is that the idea will be revisited after Friday night's fight, especially if Holm wins. 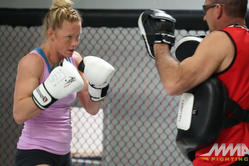 Holm reveals how she started boxing, her growth as a mixed martial artist, and what drives her.

Mike Winkeljohn, Holm's trainer of 16 years, said the plan was to have Cris Cyborg, another high-profile free agent, attend Friday night's fight, however, those plans changed following Cyborg's Muay Thai loss last week. He added that there have been preliminary talks to stage a Holm vs. Cyborg pay-per-view fight in the near future, should the UFC deal not come to fruition.

"Why do you think people tune in to boxing?" Winkeljohn said when asked if a Holm vs. Cyborg stand-alone pay-per-view could be successful. "Names. Not because Bob Arum or Don King was throwing a fight, it was all because [Mike] Tyson was fighting."

A source close to Cyborg's camp, for whatever it's worth, denied any talks of a pay-per-view fight against Holm.

Winkeljohn said it was his understanding that the UFC's initial offer was $15,000 to show and $15,000 to win. Team Holm was willing to accept that offer, however, they wanted a raise if she earned a title shot.

"We have no problem with fighting for the money they've offered us for the first couple of fights in the UFC," he said. "We just want good money to fight Ronda [Rousey] or whoever has the title at that point."

Winkeljohn said he expects Holm's manager Lenny Fresquez to engage in talks with the UFC after Friday night's fight with "a different spin."

"I think they don't want to hurt the other girls' feelings and let the world know that money has been negotiated in such a way," Winkeljohn said. "I don't blame them. They are who they are because they make all the right decisions. There are other things we can ask for. She's got such good marketability, I think she would be a good broadcaster. Hey, can you help us get to FOX to be a broadcaster? Can you help us do these things?

"There are other things we can do to make money. There are other sources for her other than a dumb little paycheck. So we might have to look at it that way."

Holm declined to discuss the UFC subject until this fight was over because she wanted to focus all her efforts on the Werner fight. A win tonight will improve the former boxing champion's MMA record to 7-0 and make her stock rise just a little more.