World Series of Fighting certainly had an interesting evening. Kicking the night off with Josh Burkman asking for his release, a spat between UFC veteran Vinny Magalhaes and WSOF Vice President and match maker Ali Abdel-Aziz quickly spiraled out of control into an uncomfortable and frankly embarrassing back and forth.

Chiming in on Burkman's contract situation, Magalhaes pegged Abdel-Aziz as the impetus for the welterweight wanting out of the promotion. Once Abdel-Aziz responded the action really took off (Warning: Some language below is NSFW). 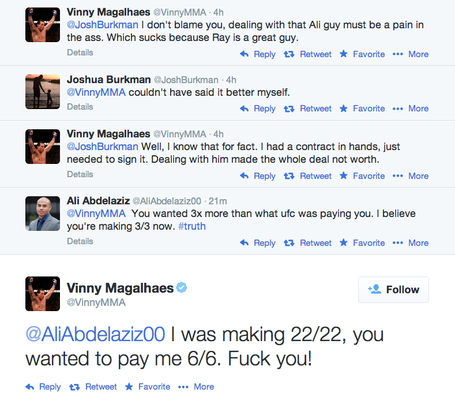 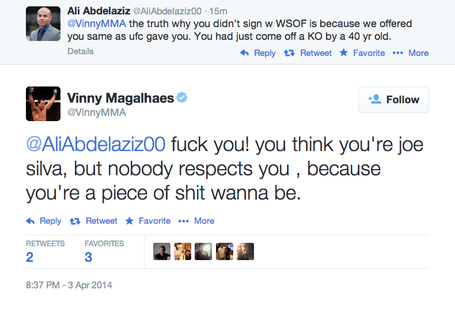 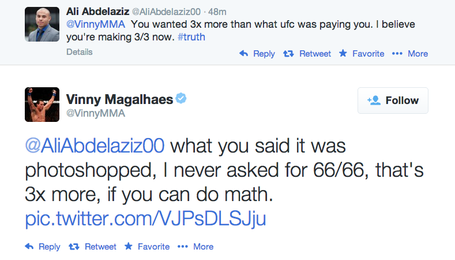 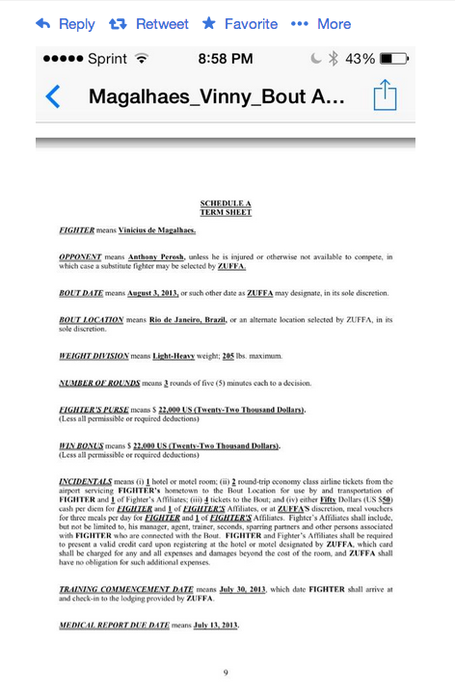 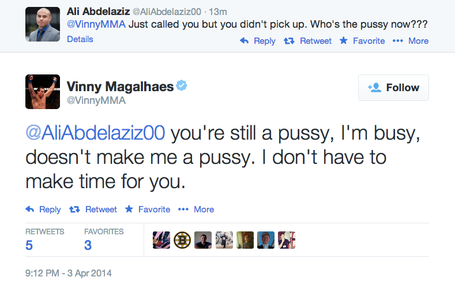 Just got a call from @VinnyMMA and it's all good #squashed

Fight journal. Spend a day with Holly Holm as she prepares for her bantamweight title fight tonight at Legacy FC 30.

Gracie-Bravo. Responding to claims from Eddie Bravo that the two were feuding, Ralek Gracie thinks it was all an act to promote his own upcoming grappling event. "This is where I started to lose respect for Eddie as a man, because he completely fabricated that."

Takedown: The DNA of GSP

But was it Ali? Or his manager?

.@MuhammadAli U sir are the original EVERYTHING! Ur the reason combat sports is where it is 2day Greatest tweet ive ever recieved Im honored

WSOF was mostly good 2 me n good 4 my career. I hope U continue 2 support them n there fighters. Many good people involved @MMAWorldSeries

I hope the mystery fighter is Clubber Lang @EASPORTSUFC 😁 pic.twitter.com/tu9gSCh9bA

Thank you Gracie Mag for your incredible completely un-bias choice in action pics of my match at Metamoris!! pic.twitter.com/4DJB0HU3hi

@DustinOrtizMMA @ufc lol i like the attitude my man. U ll get a bite. Don't worry.

Can't sleep up thinking about Ross and how were gonna bang it out.

Ok you guys are all very sick .... Bang it out define, 2 fighters punch in the face very hard, looking to knock one another unconscious

Today's Fanpost of the Day comes via friendoftheworld.

Phil Davis, "Mr. Wonderful", has been airing his grievance that he deserves a title shot. Victories over Machida, Lil Nog and Alexander Gustafsson support his argument. His defeat from Rashad Evans indicates that he may need some development before a title shot. Can Phil Davis wrestle with Jon Jones?

The fact that Davis compares Jon Jones to "gingerbread" shows that he may be overlooking a dangerous opponent in Anthony "Rumble" Johnson. In his last five wins, Johnson owns three impressive knockouts. Johnson has serious power at light heavyweight. Certainly, he has more striking power than "Mr. Wonderful". Johnson was able to outstrike a fairly technical, yet chiny, Andrei Arlovski.