Idea of Gustafsson vs. Jones 2 in Sweden too good to be true?

As it turns out, fewer of us are candidates for the asylum than was originally advertised -- Jon Jones treated Glover Teixeira and his 20-fight winning streak exactly like a 5-to-1 dog in Baltimore. There was nothing "insane" or even mildly disturbing about it. There was just elbows in the phone booth.

Which means there are no more obstacles on the path to the inevitable: Gustafsson-Jones II.

Not that Jones "wants to talk about that kid at all," but Alexander Gustafsson has to be happy with the big-time hypothetical, super-theoretical idea of His Rematch happening in Sweden. This was Dana White’s little flirtation just hours after Jones defeated Teixeira dominantly for five rounds -- Gustafsson-Jones II was possible for a 50,000-60,000 stadium in Gustafsson’s native Sweden.

Can you even start to imagine? That would be absolutely... 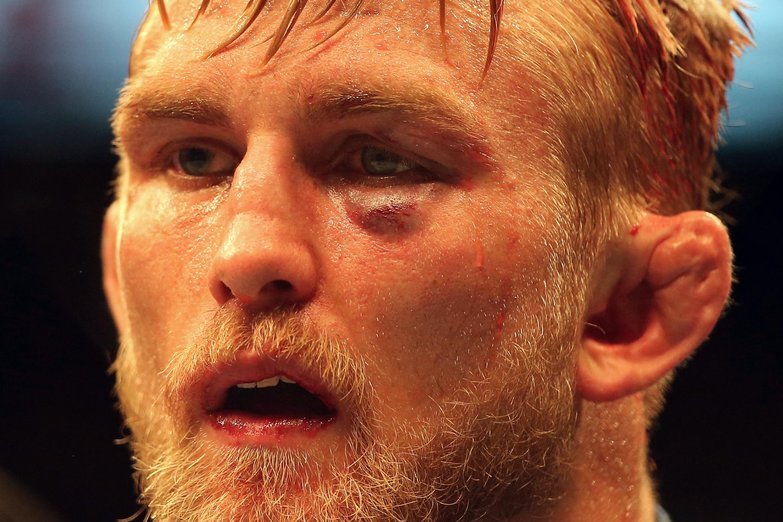 But wait wait wait, hold on just a minute… first, let’s remember that we’ve dealt in this kind of promiscuity before. After Chael Sonnen gave Anderson Silva the scare of his life at UFC 117 at the Oracle in Oakland, the rematch became an instant hot topic. Silva, like Jones, didn’t necessarily like the idea of facing Sonnen again, because he was the champion and he won. Everyone else, though, saw a deity materialize as a human and wanted to know if it was an aberration or a new reality.

Of course, we had to wait as Sonnen was suspended for elevated TRT, and new challengers filled in the landscape, but when we got around to Sonnen-Silva II the idea was to lower Sonnen into a stadium in Brazil, where he was a persona non grata (and worse, a blowhard American with elements of bad fiction).

For the longest time the UFC was visiting Sao Paulo and Rio and other locations more inland for an outdoor soccer stadium that could host the biggest rematch in UFC history, while issues of Sonnen’s safety were deliciously pored over. It was going to be MMA’s version of the "Thrilla in Manila," only Sonnen was going to need a phalanx of security to meet Silva on his own terms. It was truly a Man Against the World situation, which is the closest the fight game gets to romance. (This was before the UFC was doing shows in Brazil every other month, you might recall).

When the sequel did happen, it was in Las Vegas at UFC 148. Sonnen lost unspectacularly, and Silva asked him over for a barbecue afterwards. It was all very anticlimactic.

The big difference here is that Jones, as the historic young champion, would be asked to meet the challenger Gustafsson on his own native soil. Unlike with Sonnen, who was being theoretically dealt his comeuppance, Jones would be dealing in an additional inconvenience of 60,000 icy blonde partisans (as we imagine the whole warring nation of Sweden to be) who are there to watch him hand over the belt. It’s been a long time since Ingemar Johansson clubbed Floyd Patterson to win the heavyweight title. A long time. The fans there have been patient.

Is that fair to Jones, to have to fight Gustafsson in Sweden just because? Probably not, but damn if that isn’t the most tantalizing set-up to title defense, in the "new biggest rematch in UFC history." And if the thing were seriously being considered, and Jones was agreeable to the chips being stacked against him in such a way, it would be a fine addition to the "legacy" he likes to talk about. Here would be the champion Jones, fighting the man who chipped away at his mythos in the first encounter -- the man who humanized him -- in that man’s home country. Jones casually compared his Teixeira performance with Muhammad Ali’s rope-a-dope tactics in the "Rumble in the Jungle" fight with George Foreman. Fighting Gustafsson in Sweden would feel Ali-esque, too, for the audacity of the fearlessness.

One way or another, Gustafsson-Jones II will likely do the best PPV buys this year. People love the idea of supermen (Jones) coming down the earth as much as they like the idea of supermen refusing to (Jones again); we like playing fast and loose with a man’s mortality. If the thing were held in a Swedish stadium -- and Akira Corassani was already tweeting out the Friends Arena in Stockholm as a potential landing ground for the rematch, like a perfect gentleman -- it could shatter the live gate record from Toronto.

It could, it could. But it all remains to be seen, and right now these kind of contemplations feel all-too-familiar, like the dream big scenarios that accompanied Sonnen-Silva II.

And you know who always seemingly caters to dream big scenarios better than anybody? Las Vegas.