RIO DE JANEIRO -- Eight years after their epic war at Cage Rage 15, Melvin Manhoef and Evangelista Santos finally met again in a cage, and the bout ended in less than a minute.

Manhoef and "Cyborg" fought for the inaugural Gringo Super Fight welterweight championship on Sunday night in Rio de Janeiro, Brazil, and the "gringo" needed only 46 seconds to earn the 27th knockout victory of his MMA career.

Manhoef rocked the Brazilian and earned the stoppage with a flurry of punches.

"I wasn’t expecting such a quick win," Manhoef told MMAFighting.com after the title fight. "I was expecting a five-round war, but I was very focused."

"Cyborg" protested after the stoppage, claiming that Manhoef landed an illegal knee when he was on the ground.

"I don’t know why (he protested), but I believe the knee was legal," Manhoef said. "I’m okay to rematch him again."

Manhoef might be open to a third fight with Santos, but another rematch is in the making.

Manhoef had no idea, though. 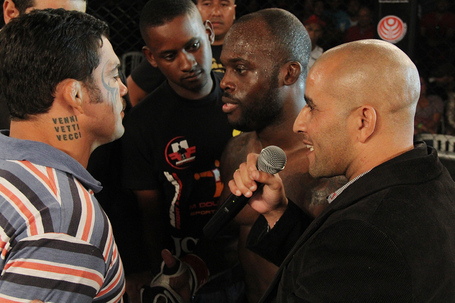 Manhoef, who suffered a first-round submission loss to Filho in 2009, wasn’t asked about the fight before the challenge, but accepted the fight. Filho wanted to fight Manhoef tonight, and even called him to fight outside the arena, but they will have to wait for November.