Signal to Noise: UFC on FOX 11's best and worst

UFC on FOX 11 offered a lot to love and a lot to not be particularly thrilled about. There was scintillating action put on by some of the best the game have to offer. The Amway Center in Orlando, Florida, was sold out and the action completely delivered. Yet, the casual fan base didn't respond in a way that is raising eyebrows.

It's time to separate the winners from the loses, the best from the worst and the signal from the noise for Saturday's UFC on FOX 11.

Most Impressive in Victory: Fabricio Werdum

I don't really share UFC President Dana White's criticism of Fabricio Werdum. That isn't to say I don't also agree Werdum took a more conservative approach in the championship rounds of the main event bout opposite Travis Browne. I do, except that I view that more as a perfectly natural reaction and a bit of an oversimplification of what actually happened.

Werdum is 36 years of age. If he didn't defeat Browne on Saturday night, the likelihood of him earning his way into a title shot again - even in a division as thin as heavyweight - is extremely low. It was essentially now or never for him. He battered and controlled Browne for three rounds, which not only gave him a lead on the scorecards, but turned Browne into a more manageable task for the duration of the bout.

In routing Browne for five rounds, Werdum did just about everything that can be asked of an elite heavyweight in his career predicament. There wasn't a single phase of the fight where Werdum didn't dominate and for all the talk of not finishing Browne, Werdum continued to score with punishing strikes deep into the championship rounds. Werdum slowed the pace in the last ten minutes, but not for reasons that exist in a vacuum. Browne's durability in the face of all Werdum could give him probably figured into the Brazilian's calculations.

I don't give Werdum much of a chance against Cain Velasquez, but I've been wrong about Werdum any number of times. He's hard to pin down because he isn't the same person we once thought him to be. Some fighters add to their arsenal over the years, but never 'leave themselves', such as we understand them. Chuck Liddell was always going to be the guy who pressured in the pocket and Matt Hughes was never going to abandon his wrestling. But Fabricio Werdum makes you forget about his jiu-jitsu accolades. He makes you even forget his old fights. He simply isn't the same competitor anymore. Watching film on him is only relevant as a way to track his progression, not understand how you'll face him in the future.

In the end, that's all we can ask of fighters: to maximize their potential. Werdum has done just that, proved his skills in the most challenging of ways and not a moment too late in the twilight of his career. You can see why the guy is all smiles and why his effort on Saturday is worth nothing if not unvarnished praise.

It's incredibly difficult to overstate just how good Nurmagomedov is. In terms of launching offense, he's remarkably proactive, never giving opposition an inch to operate. And in the grappling department? I don't even know where to begin heaping praise.

There are so many wrestle-boxers in the UFC or MMA who have good takedowns, so-so passing and a couple of submissions. There are also many jiu-jitsu players who have great submissions, but poor takedowns or control positions. Nurmagomedov has it all from the takedowns to the pass to the control to the submission. He's also got all of the transitions and just enough traditional judo takedowns to compliment his more wrestling-based leg and hip attacks. In short, once he locks up with you, there's nowhere to hide or retreat. It's one thing to be a great grappler. It's another to be a sensational talent when the opposition doesn't even want to engage with you there and you force them to do so.

His striking needs work, but at 25, he has at least three years before he even enters his prime, leaving him plenty of room to work on his deficiencies. Already, though, it does well for him because he throws early and often, usually with just enough dynamism to make it all work.

Honorable mention, though, goes to Jorge Masvidal for a masterful performance of technical superiority, competence and audacity by voluntarily placing himself wherever his opponent was most potent only to prove it ultimately wouldn't matter.

Best Photo of the Night: The Impact of Werdum's Kicks 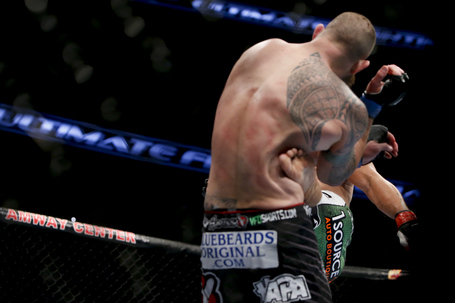 We've seen strikes of all varieties land in slow motion on video, but there's something extra about a digging kick like this embedded in the side of a person's body for a moment in time. When you see how much room his flesh (and presumably his organs) have to make as Werdum's shin drives its way in, you get a clearer sense of what these competitors are doing to one another.

Get the full UFC on FOX 11 gallery here.

If the strategy is to put on as much content as possible and tell a portion of the worn-out fan base it's perfectly acceptable to skip cards, don't be surprised when the strategy succeeds.

We need not go into full-blown panic over the record-low overnight ratings for UFC on FOX 11. As some have noted, part of the poor number is a result of seasons. There was significant competition from playoff hockey and basketball. The card was very stacked, but lacked any real head turner as far as casual MMA fans are concerned. And hey, it was a success at the live gate. The numbers are also going to go up once the final ratings are in.

But these problems also obscure some deeper truths. UFC on FOX has historically had some success this time of the year in previous outings, doing quite well even against NBA or NHL playoffs. Second, Travis Browne was coming off of one of the best knockouts of the year on one of the biggest cards, and it didn't turn into viewers when he moved from the pay to free format. That's a bit disconcerting.

The reality is there's no such thing as a free lunch. If the UFC needs more fighters to go global, fine. If they have to run more shows to fulfill their global ambitions, OK. But that doesn't mean it's going to able to maintain popularity without significant changes in North America, still the most important market(s).

There is a cost to doing this many shows. That cost is compounded when UFC brass encourage weary fans to skip cards as a means of regulating their fatigue. Once the seal of loyalty to the UFC's schedule is broken, it becomes easier and easier to skip any and all events. It's not merely about missing X event or Y show. Once you've undermined the fealty to ' Watching UFC Shows', you create an environment where something extra special has to take place for that selective viewer to tune back in. When fans see more and more of the MMA universe pass them by, the threshold of interest that has to be satisfied for paying attention again becomes harder to attain.

Sure, there are plenty of hardcore fans who just can't get enough. The more UFC shows and MMA events for them, the better, right? We have to acknowledge those people exist. Yet, that group must also accept the reality they are the tiniest of minorities. If a card as good as UFC on FOX 11, filled with important fighters in meaningful bouts that delivered in action, pulls record lows on the most wide-reaching platform UFC has ever broadcasted events, something has gone wrong and it cannot be adequately explained by its place on the calendar or what other sports are doing.

I'm not ready to declare him the future of the middleweight division, but what we did see from Romero was better decision making, something that's plagued his MMA run up until now. Before he was getting by on athletic gifts. On Saturday, he was able to more expertly and efficiently channel them without all of the other inexplicable errors getting in the way. Whether he can keep that up is anyone's guess as he climbs the ladder, but if he can be as prudent a fighter in the future as he was on Saturday, there's no one at middleweight he won't be able to beat.

Cerrone has fought three times on FOX. In two of the bouts, he's stopped his opponent in dramatic fashion in the first round. In the other appearance, he lost in dramatic fashion in the first round. Win or lose, it seems, Cerrone's style and approach is as tailor-made for the platform as any television executive could hope. Moreover, his wins are basically proof of concept of his style. He isn't just slugging wildly, hoping to have a more fortuitous outing than his opposition. He's attempting to technically trade with them, albeit in an ultra-courageous way. When one watches Cerrone, the viewer gets the visceral reality of hard-nosed prize fighting, but the technical savvy a high-level fighter brings with them to the Octagon. His reputation may be one of a brawler, but it's frankly unfair. Cerrone has skills, he just marries them with borderline irrational guts. The result, at least on FOX, is typically magic.

Let me state up front whenever I live blog any fight, I reserve the right to change my scoring on a second viewing. I haven't yet done so for Miesha Tate vs. Liz Carmouche, and I admit a scoring of 29-28 for Carmouche is perfectly defensible, but I scored the contest for Tate. Here are the stats for the fight, which are helpful, but don't illuminate what's unclear or unsettled as much as one would hope.

The basic gist is this, though: Carmouche's control positions should count for something, but not all control positions are created equal. Yes, putting someone and holding them in a compromising position merits reward, but Carmouche's double leg scoop along the fence, while technically deft, is not as meaningful as prolonged back control. I personally believe, as I made clear in the aftermath of Ben Henderson vs. Josh Thomson, that back control isn't just a space where your opponent is being physically controlled, but is at a constant threat of finishing. That didn't exist here with Carmouche's control position. For me, when combined with Tate's striking offense (and so-so sub attempt), it was close, but enough to give her the nod.

The officiating in Florida may have been bad, but it's not clear this decision is part of their larger body of regrettable work.