Maybe the way Fabricio Werdum flamed out of the UFC the first time made his climb back from the bottom of the heap so much more memorable than the rest.

Video highlights of Werdum vs. Browne 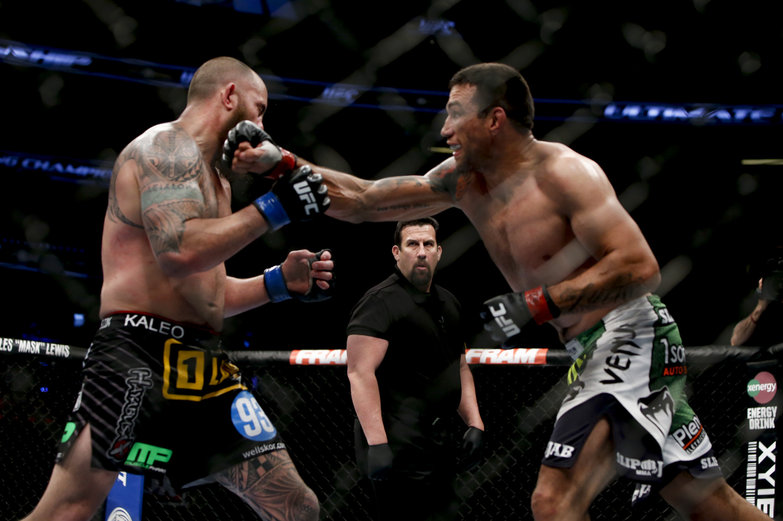 Watch Fabricio Werdum pull off yet another upset by dominating Travis Browne on Saturday night at UFC on FOX 11.

Werdum earned a shot at UFC heavyweight champion Cain Velasquez with his dominant and dynamic victory over Travis Browne in the main event of UFC on FOX 11 on Saturday night in Orlando.

The four-time World Jiu-Jitsu Championships gold medalist is far from the first fighter to get cut from the UFC roster who returned and worked their way back to a crack at the gold. Robbie Lawler nearly won the welterweight title just last month. Matt Serra was the most famous example, upsetting Georges St-Pierre to win the welterweight belt. Chael Sonnen and Patrick Cote, among others, also returned for second stints and rose to the title challenger position.

But none of them left the company in as brutal and sudden a manner as Werdum. A vicious first-round, one-punch knockout at UFC 90 against a fighter who was a complete unknown at the time, some kid named Junior dos Santos, sent Werdum on his merry way.

All Werdum has done since then is answer nearly every challenge that's come his way. With a cool demeanor and a happy-go-lucky attitude, Werdum has defeated nearly everyone in his path in the past five years, including, most famously, Fedor Emelianenko and his decade-long win streak.

Beast under the bed 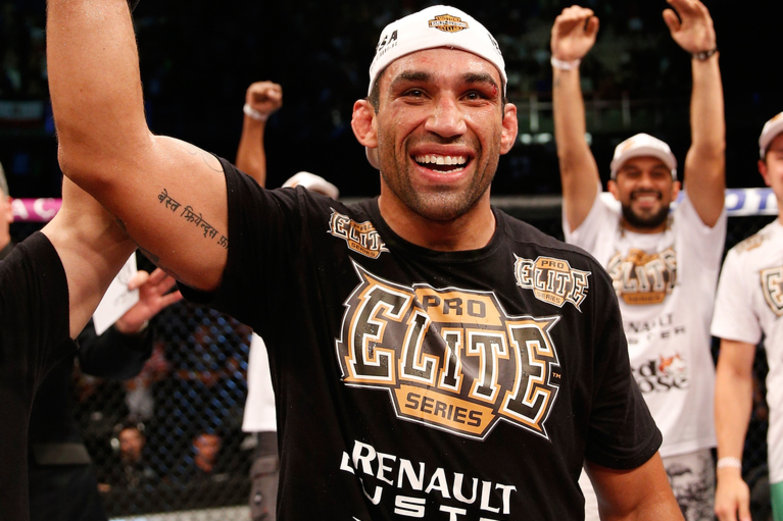 A lot of people sleep on Fabricio Werdum. But he should have woken them up with his dominant performance against Travis Browne.

Nowhere was this attitude more evident than Saturday night. Fighting against Travis Browne, who was picked by most observers to win, Werdum won the fight standing, won it on the ground, and even threw what the Diaz the Elder would call "spinning s---."

It was a tour de force performance. Whether Werdum can answer the challenge against a cardio freak of nature named Cain Velasquez is another matter entirely. But for now, Werdum has earned his moment. At age 36, in a division hardly known for longevity, Werdum has risen from UFC castoff to title challenger. That's an accomplishment worth noting in and of itself.

"I don't know what was going on early on, but then the two golden words came into my mind: ‘F--- it'" -- Donald Cerrone, explaining how he shook off his sluggish start and then quickly finished Edson Barboza.

"I'm ready for Baltimore next week if that's a possibility." -- Cerrone, asked when he wants to fight next.

"I was just trying not to be a psycho in the fight, and be a little more calculated." -- Miesha Tate, on starting slow against Liz Carmouche instead of coming out for her usual whirlwind starts.

"My kid's hungry, man, I gotta get some money for my kids." -- Heavyweight Derrick Lewis, on his nasty TKO finish of Jack May in the day's opening bout.

Up: Thiago Alves -- Rarely does the clock turn back in this sport which marches forward with such brutal efficiency. But Alves looked like the "Pit Bull" of 2007-08 in his return after a two-year absence. Alves put in a vintage performance against Seth Baczynski on Saturday night. He neither showed cage rust nor any ill effects from his injuries as he methodically picked Baczynski apart with ruthless leg kicks and crisp boxing. Credit Baczynski for having the toughness to last 15 minutes. But it was great to see Alves return to form and notch his first victory since 2011.

Down: Edson Barboza -- Barboza seems to have all the tools to become a champion. But he's held back by one glaring flaw: Momentary lapses in concentration which lead to bad things. It happened in his first career loss, when he took his eyes off the ball against Jamie Varner, and Varner made him pay with a brutal beatdown. It happened against Danny Castillo at UFC on FOX 9, when Castillo popped him. Barboza escaped that one (a bout which should have been a draw, if round one had been properly scored 10-8). But there was no escape Saturday night when Cerrone cracked him in the jaw with a picture-perfect jab and mounted Barboza for a choke before Barboza knew what hit him. Barboza seems to be 99 percent of the way to becoming a contender, but that missing one percent is a killer.

Up: Miesha Tate -- Things weren't looking so hot for Tate heading into the third round of her fight against Carmouche. She had lost three of her previous four fights, had clearly lost round one to Carmouche, and round two was, at best, a tossup. So Tate came out like a bat out of hell in round three, and did her best to leave no doubt. Tate dominated round three, and only superb submission defense and an iron will kept Carmouche from being finished. Regardless of whether you agree with the decision (I had the fight 29-28 Carmouche, but you can also make the argument round three should have been 10-8 for Tate), Tate answered the call when the fight hung in the balance and now finds herself squarely back in the mix in the bantamweight division.

Hold: Travis Browne -- When the final horn sounded on Saturday night's main event, Browne seemed a no-brainer "down" pick. This was his chance at a star-making moment on national television, and he looked off for the final, oh, 22 minutes of so of the fight. But then we found out afterwards that Browne broke a hand and likely a rib early in the fight. In that context, the fact he was able to go the distance with someone of Werdum's caliber is a remarkable show of toughness. True, Browne is going to have to work his way back up after such a loss, but given his injuries, we're willing to give him a mulligan here.

To Jorge Masvidal, who went out of his way to prove a point by taking his fight with Pat Healy anywhere he wanted it to go. Healy's game is old-school Team Quest, pressing you up the fence, grinding away, and wearing you down. Masvidal not only fdid well in his comfort zone, striking at range in center Octagon, but he didn't give anything when Healy tried to play to his strength as well. That's four wins in his past five fights for Masvidal, and the only loss in that stretch was a fight of the night against Rustam Khabilov. Masvidal once went 25 minutes in a Strikeforce title fight against Gilbert Melendez. He's one of the sport's most perpetually underrated fighters. Beating a vet like Healy at his own game is a sign Masvidal is ready for a step up.

In the absence of key headliners like St-Pierre and Anderson Silva, the UFC is looking to build up new stars. Khabib Nurmagomedov seems to be on a rocket ride up the UFC lightweight division. He's 22-0. He's 6-0 in the UFC. He endlessly pushes forward and initiates offense. He rarely takes a step backwards. He's a takedown machine. If anyone in the UFC should be getting a promotional boost, it's this kid.

But his fight with Rafael dos Anjos, who had a five-fight win streak on his own, was relegated to the FOX Sports 1 undercard instead of being featured on the network television broadcast. Whether it's the UFC or FOX's call, someone seems to be catering to the "Just Bleed" crowd on the network main cards, to diminishing returns, as Saturday's overnight ratings show. Maybe it's time stop overdoing it with Ultimate Kickboxing and start nurturing superb all-around talents like Nurmagomedov instead.

Fight I want to see next: Miesha Tate vs. Sarah Kaufman

The odd thing coming out of last night's event is that despite a night of solid across-the-board action, there aren't a ton of fights screaming to be made after this one. One of the obvious ones, Velasquez vs. Werdum, is, in fact, being made. For a minute I thought Cerrone vs. Nurmagomedov seemed interesting, but it's hard to see that playing out any way except for Nurmy taking Cerrone down at will, and I'd rather see Cerrone continue to get matched up in fun fights instead of using him as fodder for a future title contender.

Tate, however, suggested Sarah Kaufman among the opponents she wants to face. Its a fight which makes sense. Kaufman defeated Tate on Showtime back during the days when women fighters were condescended to and only allowed to fight three-minute rounds. The fight makes sense for both now. Both have lost to Rousey. Both are in the division's upper echelon, but can't be pushed for another title shot yet. Kaufman is 5-1 in her past six; Tate is coming off a win. Let them rematch with full five-minute rounds and truly find out who the better fighter is.