The UFC's Fight Pass series rolls on and this time the UFC turns in one of the better quality cards of the franchise to date as top light heavyweight contender Alexander Gustafsson looks to get past hometown challenger Jimi Manuwa in a bout with very significant stakes. Should the Swede emerge successful, he'll like be next for the winner of Jon Jones vs. Glover Teixeira. If Manuwa can pull the upset, he launches himself to the top of the division.

Does Manuwa have what it takes to beat a well-rounded fighter like Gustafsson? Will the Swede do what he has to to get another crack at the light heavyweight title? I answer these questions and more with my predictions for Saturday's fights. 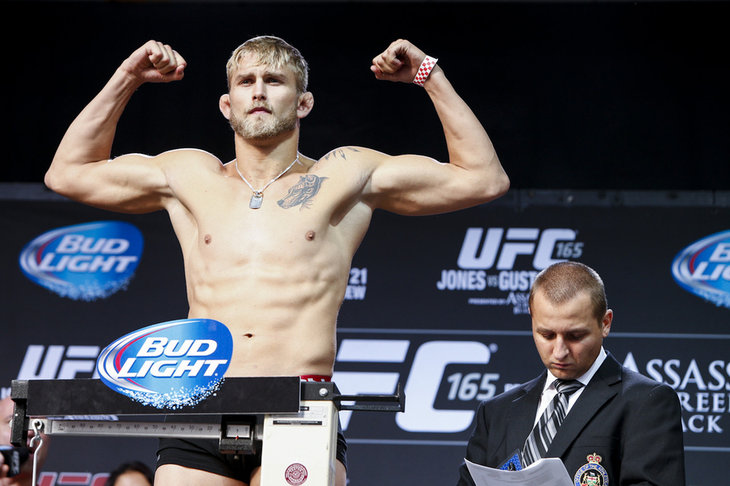 Watch as the fighters taking part in Saturday's event step on the scale.

Look, if Gustafsson is intent on striking this one out on the feet, I'm not suggesting he can't or won't win, but it's certainly not the most likely path to victory. If Manuwa is dangerous anywhere, it's there. The same cannot be said, however, for his ground game, which is woefully inadequate to deal with the kind of pressuring passing and attacks the Swede possesses. If and when this fight makes it to the floor, I can't imagine it'll last long.

The one potentially interesting wrinkle here is the takedown style of Gustafsson, which is the clinch. The Swede is tall and isn't much of a knee-pound, level-changing double leg guy. If he's unable to quickly put Manuwa on his rear end from the clinch, it's very possible he'll take some abuse in the process. How likely is that? Probably not very, but it's worth paying attention to as the fight goes on.

This is a hell of an interesting bout, and I'm not sure where to go. Whenever former teammates compete, it's difficult to decide what it means other than someone is desperate to get the upper hand. Does Johnson know enough of Guillard's game to thwart it or is the opposite true? Both fighters are quick, proactive on offense and devastating punchers, although Guillard might be the harder hitter. Still, Johnson is probably the better counter puncher and uses a more diverse set of attacks as a kick boxer. The Blackzilian is also riding a very nice wave of momentum, but against fighters not really capable of bringing an early striking attack of considerable speed. I've gone back and forth on this and in the end, I suspect Guillard's going to be too much for him.

Seery is 34 years of age, and while riding a nice win streak, hasn't faced anyone who is truly on the level of Pickett. The Brit has been battered in his career, which concerns me as a general rule, but I sincerely doubt Seery is going to be able to hurt him standing. Seery has some skills on the floor, but not enough to make full use of them against the likes of Pickett.

Nelson gets hit a little bit more than he should standing given his willingness to engage from the pocket, so that's worrisome for Nelson supporters, but I don't think Akhmedov will be given enough time and space to really work from the outside for very long. And even then, there were several moments Akhmedov nearly was slept in his UFC debut. He isn't much for defense standing either. The Dagestani fighter is also absolutely no slouch on the ground and is, in fact, the more physical of the two, but Nelson's submission attacks are far, far superior. I suspect Akhmedov will have his moments here or there, but won't have enough to take away the win.

From the preliminary card: