On the mend from a torn ACL, UFC featherweight Conor McGregor is making sure he's gone, but not forgotten. Speaking with Irish independent radio station News Talk, McGregor isn't keeping his slings limited to his own division. In addition to lambasting UFC featherweight champion Jose Aldo and other notable contenders, McGregor made time for one of his favorite targets. 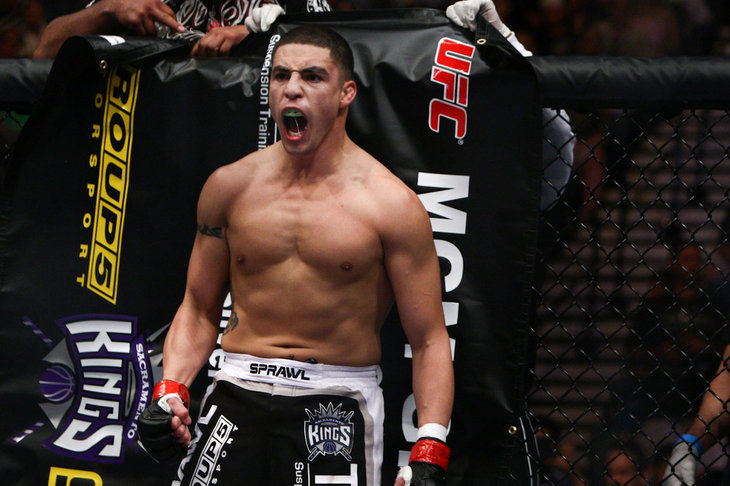 The Ultimate Fighter 1 winner will meet Ross Pearson in June.

"I would love that [Diego Sanchez] fight, but he's been getting his ass whooped in the past couple fights. I don't want to end his career. He's already slowing. Like he said, he's been with the promotion for nine years. He's been there since Ultimate Fighter 1. He's the original Ultimate Fighter. The guy can barely string a sentence together. It's time to call it a day.

"This is a dangerous game. You don't want to hang around this game too long. I'm going to get in, whoop everyone, take the belts and go home with all the money."

As for Aldo, McGregor reaffirms his thoughts on the champ, disagreeing with others who peg the 145 pound king as one of MMA's best.

"I don't think so. I think he's basic. His movements are limited. He doesn't do any crazy movements. There's nothing that jumps off the page when I look at him. I thought that straight away. A lot of guys think he's this and think he's that. I certainly don't. That fight will happen and when that fight does happen everyone's going to see. I'm going to prove what I'm saying."

McGregor is none too impressed with deposed No. 1 contender Ricado Lamas following his unsuccessful title bout with Aldo at UFC 169. Last summer the Irishman trivialized Lamas all together, saying no one cared about him.

Rounding out the division, McGregor even touched lightly on Dustin Poirier and Cub Swanson.

"[Poirer] has an unusually small head. These are all facts. He's got a big frame with a little, small peahead. Cub Swanson is a little wrinkly mother f***er. He looks old and s**t. I'm just stating facts."

Although not confirmed, McGregor is likely to return to action at the UFC's Jul. 19 event in Dublin, Ireland.

New headliner. Renan Barao will defend his bantamweight title to T.J. Dillashaw in the main event at UFC 173.

All clear. Rousimar Palhares has passed his pre-fight drug test, ensuring he will indeed face Steve Carl at World Series of Fighting 9 for the welterweight title.

Royler vs. Bravo. Win or lose at Metamoris, Royler Gracie says his legacy in Jiu-Jitsu won't be affected.

Uniform talk. After an alleged mockup of middleweight champion Chris Weidman sporting a UFC uniform was released, the promotion responded, saying no deals with apparel companies are in place.

Cyborg weighs-in and squares off.

Tore my left ACL in training. Surgery in a few days. Rehab, pain, hard work, no shortcuts- I'll soon be back at 100%. Thanks for the support

Lil' help here...how do you say "BoozeHound" in Portuguese?

Back to San Jose.

Thanks @sanjosesharks for hosting us tonight! http://t.co/JmHVpgFcwP

@TJDillashaw DUDE!!! :) This is Amazing, you got this man! Much deserving !!!

Yes he is my opponent, but he is not my enemy! #WSOF #March29 #FightingForYou http://t.co/Nwjqhz2rFe

to fight in front of my entire family one last time would be fantastic! Is even consider a welterweight fight #Albuquerque 6/7 #anyone

Can someone tell me where is Kimbo? http://t.co/dvHBLCHJ5t

Roland Delorme vs. Michinori Tanaka at UFC 174 in Vancouver

Today's Fanpost of the Day comes via Tyler212.

This Saturday Rousimar Palhares will be challenging Steve Carl for the WSOF Welterweight title! This fight has flow under the radar, but I think this has the makings of a pretty exciting fight. Palhares was recently cut from the UFC after defeating Mike Piere via heel hook, but refusing to let go......yet again. Steve Carl defeated Josh Burkman via triangle choke to obtain the welterweight strap. Well it's the time you've all been waiting for!

Steve Carl- Steve Carl has been on fire lately, winning 7 straight fights including 3 in a row in the WSOF. He has been a submission machine since he started his career, racking up 16 submission wins. Despite all of his submission prowess, I still do not think he should go to the ground with Palhares. Steve Carl is an aggressive fighter who likes to throw strikes and go for the takedown. He needs to hurt Palhares on the feet first before attempting to take it to the ground. He also must avoid Palhares's guard, from there he can be caught in one of Palhares's nasty leg locks. He also needs to be aware that Palhares will will to jump to a leg lock from any position. The keys to victory for Carl will to keep it standing and, If it does go to the ground, remain on top and in a dominant position.