Shane Kruchten knows his battlegrounds inside and out

Matt Brown had his first fight in an Ohio moose lodge, essentially on a drunken whim. Jimy Hettes, who struck fear in the heart of absolutely nobody with his boyish looks, dipped his toe in the fight game at roadhouses and strip joints in rural Pennsylvania. For Shane Kruchten, who makes his World Series of Fighting debut on Saturday night at the Hard Rock Hotel in Las Vegas, it was at a bar in Menasha, Wisconsin.

Kruchten didn’t intend to fight that night back in 2007, but when a local promoter needed a warm body to step in after a last-minute cancellation -- and dangled a bar voucher to its participants in the form of payment -- Kruchten imagined all the happy golden pitchers he could pass around with his buddies.

The promoter gave him some shorts and tossed all 260 pounds of his jiggling frame in the cage.

Of course, recollections are a little hazy on this front. Depending on the day, there are some recountings that Kruchten actually lost that fight after a game effort, that he took a few lumps amid a sea of pumping fists and boozy Roman chortling. (These, too, from Kruchten himself). So no real telling what went down that night in Winnebago County.

But the reality is it doesn’t matter -- at that moment Kruchten discovered something about himself that he would store away for later. He learned that he liked to compete in combat sports, and that fighting, for a person in his shoes, might end up being his salvation. Unfortunately, it took him a few years to fully actualize that idea because, as a member of the 5th Marine Division who was just a teenager when he served on an invasion force in Iraq, he was still very much in a post-war bog.

It was a slow dawning, but the war traveled back with him to the States.

"Evidently, I came back and I thought I was completely fine but little did I know, manifesting in the back of my head was this little demon called PTSD [post traumatic stress disorder]," he says. "It kind of started showing itself with addiction and whatnot. There is a joke going around, as a Marine buddy I always says, ‘I served five years in the Marine Corps and they gave me a really cool parting gift.’ And I go, what’s that? And he goes, ‘PTSD and an overwhelming appreciation for Filipino women.’ I would always look at him and shake my head. Well now look at me, now I’m married to a Filipino, and I’ve had to deal with PTSD." 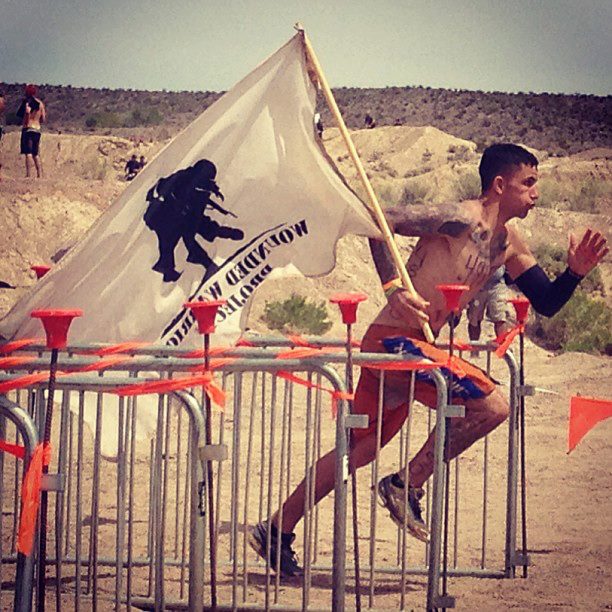 While serving in the Marine Corps, Kruchten -- at the time not ever old enough to vote -- took in a hard dose of reality that both exhilarated and haunted him.

"Basically I was part of a liberation force that freed a country," he says. "It was the best feeling in the world. I had my eighteenth birthday in Iraq. Not many people can ever say that. I was sitting in a country being occupied by the United States, more or less, at 17 years old, and writing letters to my friends who were still in high school that I was supposed to be graduating with. I graduated early to join the Marines. Being over there was really cool, it was a life-changing event. It really opened my eyes coming from Wisconsin. I was able to help people, at the same time I saw a lot of people suffering."

Before he could be sent off on a second tour -- and already drinking to obliterate memories of the first -- Kruchten talked to a military psychologist about his ongoing nightmares. Upon describing what he was going through, he was diagnosed with a personality disorder and deemed unfit to handle weaponry. In effect, he was "kicked out the back door of the Marine Corps," as he says. This only served to make emotional matters worse on the home front.

Kruchten’s post-war tailspin lasted for several years. He had some fights in 2007, but he was a blind drunk by then. He simply couldn’t unsee what he had seen back in the early-aughts. Soon he was taking pills and other drugs to help cope with his day-to-day. By the summer of 2009, things had gotten so bad that he actually circled a date in which he would try and end all tolls in one fell swoop.

"June 14, 2009 was the day that I decided that the end was coming," he says. "I was living on $700 a month at the time, couch surfing, virtually homeless. I took the $700 and spent it all on cocaine and pills and started doing it until eventually blacked out. Next thing I know I’m waking up in a pool of my defecation and my own vomit."

His mentor at the time, Norberto "Norbie" Lara from the Wounded Warrior Project, had been calling Kruchten for hours, sensing something was wrong. He called the authorities to go and investigate.

"The cops found me by kicking in my door," Kruchten says. "My mentor, Norbie, who I believe more or less saved my life, he was in the back of my head the whole time I was doing it. I never had more missed calls from him than that day. Even to this day I consider him my guardian angel."

As have many troubled souls before him, it was shortly thereafter that Kruchten -- now armed not only with a second chance, but a sudden understanding that his life was worth living -- began training in mixed martial arts. The gym became a way for him to leave the ghosts to the past, and better see where he was going.

"I was in Wisconsin with a 2-2 record, and I thought, I’m going to move to California and become a super-famous fighter," he says. "It didn’t work out quite like that. I came out here and I just walked into a gym and I was trying to boast about myself, and I got put through the ringer. They were people that weren’t famous then, but they’re quasi-famous now. They’re Strikeforce vets, UFC vets, Affliction fight vets. They mentored me and really brought me through, and pretty soon I was winning fights, and next thing you know I’ve won 11 straight."

These days he’s at Team Oyama in Costa Mesa, California, not very far from where he was stationed at Fort Pendleton to the south. Among those he’s trained with are Quinton Jackson, Give Santana and Ian McCall, the latter who digs the edginess that Kruchten brings to the gym.

"Shane’s a great guy and a hard worker," McCall says. "He’s a little crazy…but who doesn’t like crazy?"

In a few short years the now 28-year old Kruchten has whittled his once burly frame down from 260 pounds to around 160 pounds. Standing 6-foot-1, he competes as a pikelike featherweight, and will meet fellow Marine Mike Corey on March 29 at WSOF 9.

In other words, the man who will enter the cage on Saturday will bear little resemblance to the one that fought half-cockeyed back in 2007 for a drinking spree. Yet, in tribute to his "brothers" that he served with, he carries his memories on his shoulders.

"My back tattoo is all the guys that I actually did serve with the 3rd Battalion 5th Marines, the guys on my back are the guys that I served with side-by-side or that have served while I was still in the Marine corps, or that I had previously served with. It’s a way to honor their spirits. There are 19 names, and it’s a way for me to carry them along with me everyday as a walking memorial. And also to remind myself that they got my back. I carry their names so people don’t forget the ultimate sacrifice they contributed." 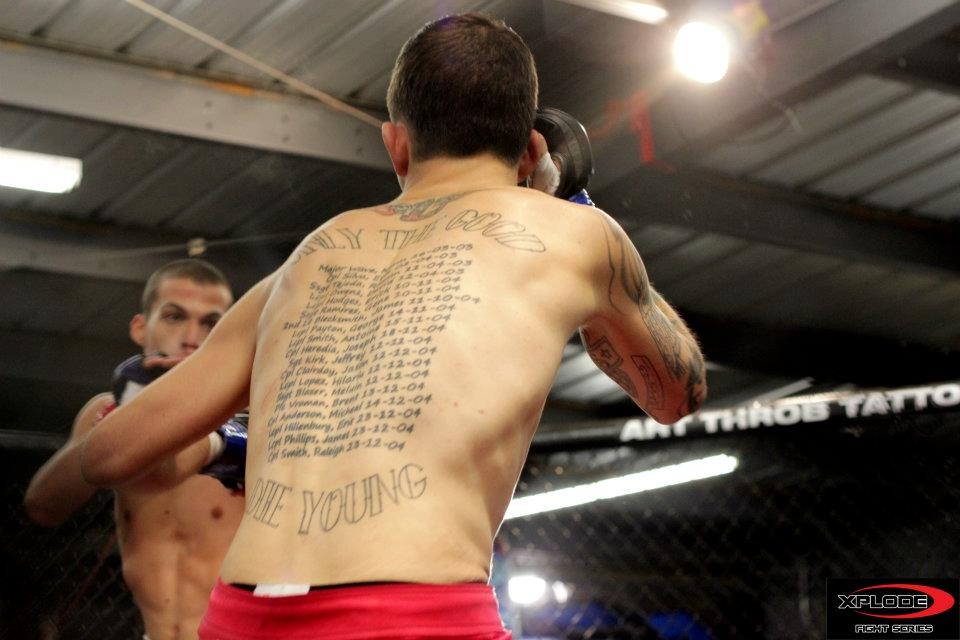 And those names are getting more prominently displayed the further Kruchten’s redemption story goes. After toiling in the Xplode Fight Series, he got the news from WSOF’s vice president/matchmaker Ali Abdel-Aziz on Christmas day that he would be fighting on the March 29 card.

"Ali’s such an amazing person," he says, still beaming at the thought. "I just texted him on Christmas and said, hey, I hope you and your family had an amazing Christmas. And his text back to me was, ‘Ho ho ho, be ready, because on March 29 you’re fighting. Merry Christmas!’ And I thought whoa! I’d just had my daughter, and I was screaming to my whole family.

"At the same time, to be opening the show for the names I’m opening up for puts pressure on you. These are the guys I grew up watching -- Josh Burkman, Yushin Okami, Rousimar Palhares. All these guys. I grew up watching these guys as a fan. Now I’m like, hey, since I’m on the card with you guys, is it okay if I get a picture?"

Given the path he took to get arrive at this moment, that doesn't feel like so much to ask.