Set to welcome Anthony Johnson back into the fold at UFC 172 in April, Phil Davis can't help but sound like he's drawn the short straw. Largely absent from much of the light heavyweight division's title talk, Davis and his management believed a win over Lyoto Machida last August made him due for a top five opponent, but were forced to settle to avoid an even longer layoff. "He's not the guy I wanted," Davis said of Johnson earlier this month. "But pretty much everyone else was booked, so it wasn't a huge surprise, but it was like, I'll take it at this point."

That's why when it comes to contendership issues, Davis has no sympathy for light heavyweight champion Jon Jones. After Jones took heat from fans for offering up his own title gauntlet, Davis mockingly wonders why the UFC hasn't embraced his input.

"Why not get him a job? Throw him on payroll," Davis tells Sportsnet Canada. "See what he can really do with the lightweights. He seems to matchmake so well. I don't know. I feel bad for [Jones], but he put himself into an interesting predicament. 'Why not just have a light heavyweight tournament and have the winner fight Jon Jones?' That's pretty much what he's saying. 'You guys should have a tournament.' Call it 'The Ultimate Jon Jones Fighting Championship.'

With Daniel Cormier and Alexander Gustafsson recently surviving Patrick Cummins and Jimi Manuwa, respectively, Jones believes the victors should fight one another to decide the true No 1 contender. Left out again, Davis says it just makes for more bulletin-board material at Alliance MMA.

"We're definitely not a group full of yes men," says Davis of his San Diego camp. "When somebody reads an article of somebody saying something like, 'Hey did you read so and so said blah blah blah?' Not so much to take a dig at anybody but they like to get you going and fired up right before practice. It's good. My team understands the position I'm in and what's at stake. It's good."

Results & Bonuses. Get all caught up on last night's results and bonuses from UFC Fight Night: Shogun vs. Henderson 2.

Signed. Chael Sonnen vs. Wanderlei Silva finally has a date and location locked down.

Chope. After his fight was cancelled and he was released by the UFC, Will Chope gives his side of the story.

One more vote. Anderson Silva says Dana White owes a fight between Ronda Rousey and Cris Cyborg to the fans.

Check out interviews with last's night's fighters from our man on the ground, Guilherme Cruz.

As always, make sure to check out our Pros React piece for instant reaction from UFC Fight Night: Shogun vs. Henderson 2.

A few more reactions from Hendo vs. Shogun.

Our sport is not joke @ufc http://t.co/9pZcQSMNtj

What an awesome fight with @danhendo and @ShogunRua! Dan weathered the storm and closed the show like the legend he is!

Love the picture/logo of Hendo breakdancing on his banner. Heard he was super talented. #UFC pic.twitter.com/1RwFS6BvhQ 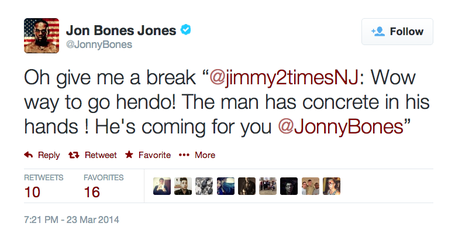 Fucking headbutt wake up in a choke. Get dropped by a head butt ah fuck it.

Absolutely feel robbed. Everything @KitCope n I worked landed & everything he threw at me I defended. I get dropped by a headbutt n lose

Getting back in the gym tomorrow. Quick turn around, just happy I have no injuries & can build off of the hard work from the last camp.

In response to Diego Brandao saying he wanted a rematch.

Hey @DiegoBrandaoMMA I already took the trash out!

Brandao had his shot. I am 100% focused on my next challenge and that is Akira Corassani April 16th, don't miss it. Gonna be beautiful

I guess he got the message.

Hey doofus, paper. Pen. Sign. If they put your brain in a bird, it would fly upside down.9 days to sign or I release those.. Well, you know.

Alexis Dufresne vs. Amanda Nunes at UFC on FOX 11

Today's Fanpost of the Day comes via Da Headbanger.

What We NOW Know About UFC Fight Night 38 Main Card... And What Should NOW Be Done*

Normally sequels suck. Well, at least when you compare them to the original. I'm not going to say this one was better... but it was a damn good sequel. And it made sure that the nights attention wasn't spent focusing on the performance of the referees (more on that in a bit).

The fight was back-and-forth just like the first fight was, but Rua had the advantage early this time around and Henderson made sure that there was a finish instead of letting it go to the judges. The first knockdown of Henderson was a nice right-left combo in the first that sent Henderson to the canvas, though someway somehow Henderson got back to his feet only for Rua to take him back down and come close to finishing it again before the round expired.

In the second Rua landed a beautiful uppercut that sent Henderson to the ground again. Henderson was able to recover enough to clinch up with Rua (after Rua went to the ground) to force the stand up by the referee. Up to this point the fight was all Rua. That is what made the victory for Henderson so much more amazing.