Which do you prefer: The excellence of a dominant, long-time champion? Or a Wild West feel to a division, in which several worthy contenders are clawing their way up the ladder all at once, and the rankings after each card are going to look significantly different than the one before?

If you like the latter, you're going to enjoy the welterweight division in 2014. If that wasn't clear after Rory MacDonald's compelling win over Demian Maia at UFC 170, the point was driven home at UFC 171 on March 15.

In the absence of long-time champion Georges St-Pierre, Johny Hendricks and Robbie Lawler went toe-to-toe for 25 minutes in as thrilling a title fight as you'll see in any weight class. This came after Tyron Woodley backed up his talk by finishing Carlos Condit. Which came after Hector Lombard made his statement by dominating Jake Shields for 15 minutes.

The results, of course, are reflected in the latest edition of the SB Nation welterweight poll. Hendricks remains the top spot, garnering all six first-place vote. Lawler proved you can win by losing sometimes in the sport. After his valiant effort against Hendricks came up just short, he jumped a spot from third to second, getting five first-place votes. Woodley, unranked last month, jumped all the way to No. 3.

And Lombard, who was previously unranked, debuts at No. 7 after his second straight win since dropping to 170.

Woodley and Lombard aren't the only fighters ranked this month who weren't in the top 10 last time out. Also returning to the rankings is .... drumroll .... Stockton's favorite son, Nick Diaz. By announcing the end of his self-imposed retirement, the former Strikeforce champ once again becomes eligible.

The question from here is, while Diaz is eligible, should he be ranked? This is, after all, a poll for the spring of 2014, and Diaz's last victory was in 2011. Four of six voters decided that's just too much of a gap to automatically re-rank Diaz, but he still gained enough points to re-enter the poll at No. 9.

(Scoring: Fighters are given 10 points for a first-place vote, nine points for a second, etc., down to one point for 10th place. The results are then tallied up and presented here. Official SB Nation rankings policy: Fighters under commission suspension are ineligible to be ranked during the duration of their suspension or if they have licensing issues. As of this writing, this does not affect any welterweights of note. Also, since St-Pierre relinquished his title and walked away from the sport without any guarantee of returning, he will be regarded as a retired fighter for rankings purposes and is ineligible). 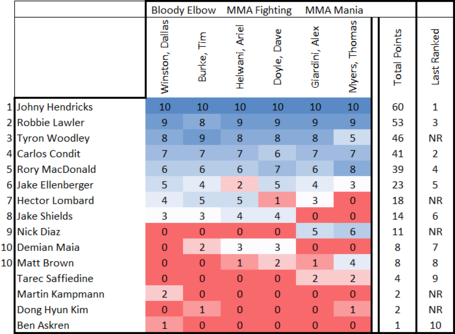 1. Johny Hendricks (16-2, 60 points): Hendricks will soon undergo surgery to repair a torn bicep, an injury which nearly caused him to withrdraw from his UFC 171 fight with Lawler.

2. Robbie Lawler (22-10, 1 NC, 53 points): Obviously Lawler would rather have the title, but he established himself as a real money player in the division and remains high in the mix.

4. Carlos Condit (29-8, 41 points): Tough break for the "Natural Born Killer," who faces rehab from a torn ACL before he can consider a timetable on a return.

5, Rory MacDonald (16-2, 39 points): MacDonald's name has been mentioned as a possible next challenger for Hendricks. But given his win over Maia was his first impressive performance after two lackluster fights, perhaps one more fight before a title shot is the best option.

6. Jake Ellenberger (29-7, 23 points): Ellenberger has his chance to show he still belongs in the conversation when he meets former Strikeforce champ Tarec Saffiedine next month.

7. Hector Lombard (34-4-1, 1 NC, 18 points): Lombard has made it pretty clear he doesn't enjoy the weight cut to 170. But it's equally clear he's going to be a force in the division after dominating Shields from bell-to-bell in a way few have ever done.

9. Nick Diaz (26-9, 1 no-contest 11 points): Going to shuck aside any notions of objectivity here and just say it: If the often-cruel MMA Gods have any goodwill in them at all, we'll get Diaz vs. Lawler 2 sometime this year.

10t. Demian Maia (18-5, 8 points): Maia had a nice run after dropping to welterweight, but he's going to need a big win next time out to stay relevant.

10t. Matt Brown (18-11, 8 points): A hometown main event against Erick Silva on May 10 in Cincinnati is all the motivation Brown needs to return from his back injury.