As the welterweight division moves into uncharted waters in 2014, there's little doubt who is steering the ship.

With a big welterweight event around the corner at UFC 171 on March 15 in Dallas, each of the top four finishers in this month's SB Nation poll were unanimous picks.

Johny Hendricks, who meets Robbie Lawler at UFC 171 to fill the championship vacated by Georges St-Pierre, took all six first-place votes. Former UFC interim and WEC champ Carlos Condit, who meets up with Tyron Woodley on the same show, took all six second-place votes. Lawler was an across-the-board third-place vote. And Rory MacDonald, fresh off his gut-check victory over Demian Maia at UFC 170, garnered all sixth fourth-place votes.

Those are division's Four Horsemen as the post-GSP era begins. But the next tier of fighters will have their chance to state their case as well. The fifth-place finisher, Jake Ellenberger, meets up with No. 9 Tarec Saffiedine, the former Strikeforce champ, next month at UFC 172. And No. 6 Jake Shields will look to hold off a relative newcomer to the division in Hector Lombard at UFC 171.

So don't blink, because these rankings could look a whole lot different come springtime.

(Scoring: Fighters are given 10 points for a first-place vote, nine points for a second, etc., down to one point for 10th place. The results are then tallied up and presented here. Official SB Nation rankings policy: Fighters under commission suspension are ineligible to be ranked during the duration of their suspension or if they have licensing issues. As of this writing, this does not affect any welterweights of note. Also, since Georges St-Pierre relinquished his UFC title and walked away from the sport without any guarantee of returning, he will be regarded as a retired fighter for rankings purposes and is ineligible). 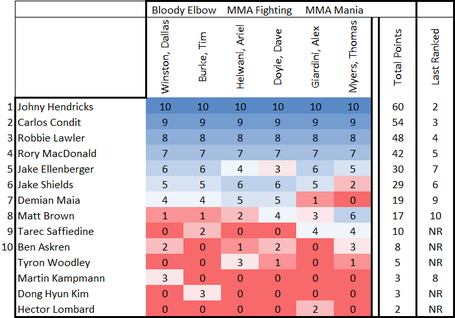 1. Johny Hendricks (15-2, 60 points): With Hendricks fighting in his adopted hometown for the title most outside of Canada thought should have been his in November, he's being set up for the UFC's first real magic moment of 2014. Can he deliver?

2. Carlos Condit (29-7, 54 points): Condit is putting his high ranking on the line against an underrated but dangerous fighter in Tyron Woodley, which is yet another testament to his willingness to throw down with anyone.

3. Robbie Lawler (22-9, 1 NC, 48 points): Lawler's best chance against Hendricks seems to come down to whether he can drop bombs first against a fellow southpaw.

4. Rory MacDonald (16-2, 42 points): The way MacDonald defeated Maia at UFC 170 -- rallying from a poor first round to claim the final two -- told the world he's finally ready to live up to his vast potential.

5. Jake Ellenberger (29-7, 30 points): The Saffiedine bout marks a pivotal point for the veteran, who is looking to shake off last summer's stinker against MacDonald.

7. Demian Maia (18-5, 19 points): Back to the drawing board for Maia after back-to-back losses against Shields and MacDonald.

8. Matt Brown (18-11, 17 points): Still on the mend from his back injury, Brown hopes to return for the UFC Fight Night card on May 10 in his hometown of Cincinnati.

9. Tarec Saffiedine (15-3, 10 points): The winner of five straight, Saffiedine will look to make a statement against Ellenberger after a 16-month layoff.

10. Ben Askren (12-0, 8 points): No debut fight is set yet for the presumably future OneFC welterweight champ.